Tracy Stone-Manning, President Joe Biden’s controversial nominee to lead the Bureau of Land Management (BLM), wrote an article while she was in graduate school advocating for population control, the second such instance of the nominee pushing for a reduction in childbearing for the sake of the environment.

Stone-Manning wrote an article in High Country News in 1991, while she was a graduate student at the University of Montana in Missoula, warning that humans have “annexed too much space” and that they were therefore threatening the grizzly bear population.

“The damage is evident and the demise of the griz imminent, yet we continue our war cries while breeding our weapons,” Stone-Manning wrote. “We can bicker and moan at each other in our battle about what is going to help the bear now, but ultimately we need to look at maps less, crunch numbers less, and begin to wage war on overpopulation.”

She lamented in the article — titled “On grizzlies, babies and a shrinking land” — about the loss of land available to the bears, writing Americans’ “victory in conquering the West was Pyrrhic” and that “the most we can do for the grizzly is ensure that it has plenty of space to thrive in, not merely survive in.”

We have annexed too much space, and we aren’t contemplating any withdrawal. In fact, we keep marching on. Now we are turning the weapon of overpopulation onto ourselves. What would the demise of the grizzly predict about our lives? The population of the United States has nearly doubled since 1940. There are many folks where I live in Montana who knew a different Montana in 1940 than they know today. The local hillsides look like war zones now. 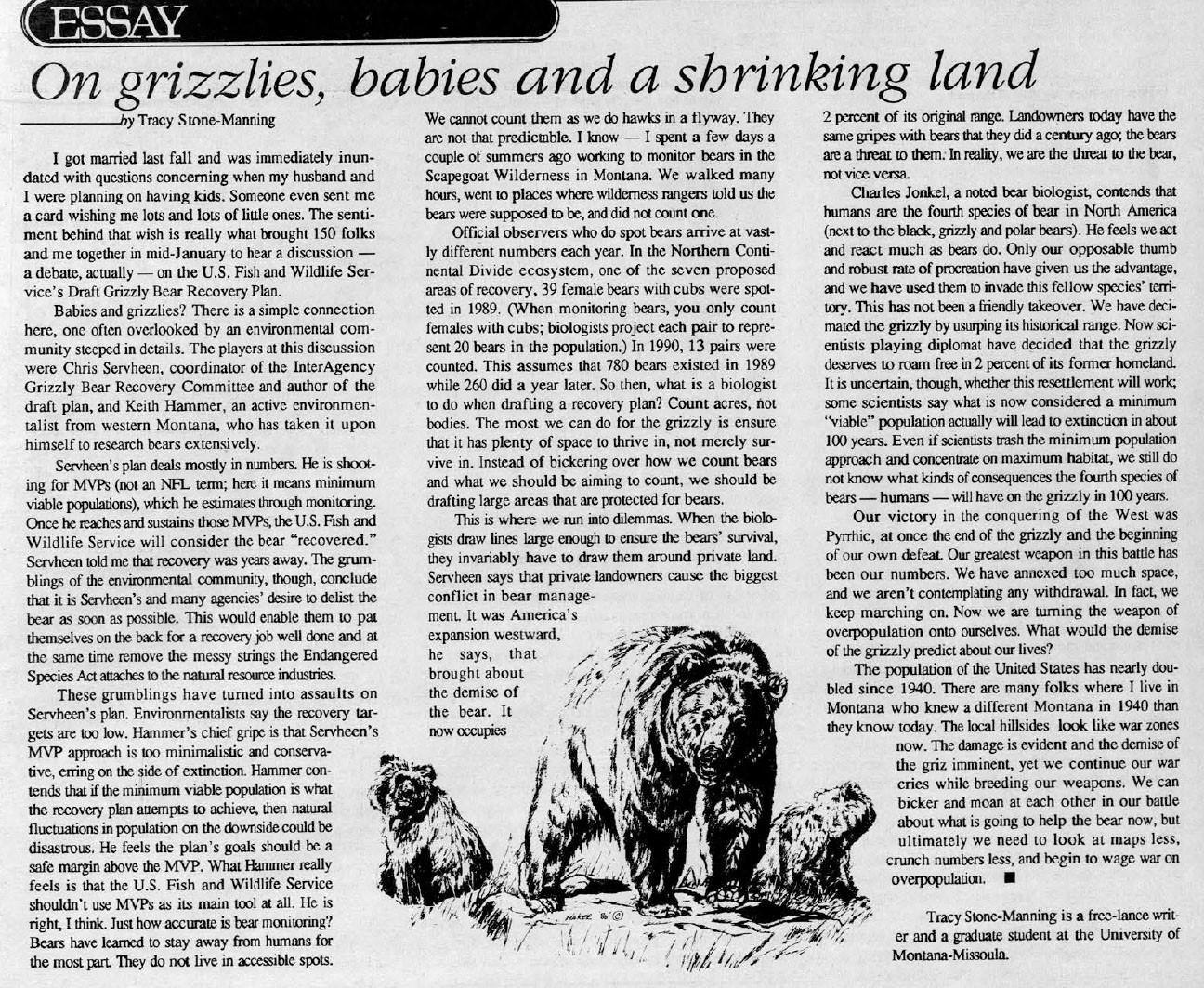 “On grizzlies, babies and a shrinking land” by Tracy Stone-Manning. (High Country News)

Stone-Manning’s controversial master’s thesis, published in 1992, expressed a similar sentiment. The thesis on “environmental advertising” highlighted population control propaganda Stone-Manning created as a means to alleviate perceived stresses to the environment caused by humans. Stone-Manning wrote that her movement “desperately needs to use advertising’s ubiquitous power if it is to capture mainstream America.”

One advertisement stated, “When we have children, the planet feels it more. Do the truly smart thing. Stop at one or two kids,” while another read, “Stop at two. It could be the best thing you do for the planet.” The latter advertisement, which identified “overpopulation” as a “problem” in America, featured a photo of a child with the caption, “Can you find the environmental hazard in this photo?”

The thesis had been public for decades, but Breitbart News learned in July that Stone-Manning called to request that the University of Montana restrict access to school affiliates only in June 2020.

While Stone-Manning was in graduate school, she was also a member of the ecoterrorist group Earth First! and was involved in a 1989 tree spiking crime. The tree spiking case alone has caused Senate Republicans to unite in opposing her nomination.

The Energy and Natural Resources Committee voted on Stone-Manning last week, and the result was deadlocked 10–10 along party lines. Senate Majority Leader Chuck Schumer (D-NY) held a vote to discharge the nomination out of the committee Tuesday, and all 50 Democrats voted to advance her nomination.

Committee ranking member Sen. John Barrasso (R-WY) has been the leading Republican opposing her nomination, and has stated all 50 Republicans plan to vote against Stone-Manning when her confirmation comes up for a full Senate vote.

Because the upper chamber is split 50–50 and all 50 Republicans are expected to reject the nominee, all 50 Democrats would need to vote to confirm her, and Vice President Kamala Harris would then be responsible for breaking a tied vote.