The administration of President Joe Biden has invited a prominent Cuban rapper, a food blogger turned left-wing policy activist, and a former staffer for President Barack Obama to a meeting on Friday to discuss the ongoing repression of dissidents in Cuba.

The White House previewed the guestlist for the event, scheduled for Friday afternoon, to the Associated Press on Thursday. The meeting followed a virtual discussion Biden hosted last week with Cuban-American celebrities Gloria Estefan and Andy García, among others, on the issue.

“The White House did not provide more details, only saying that new sanctions will be discussed as well as ways to establish internet access for the Cuban people,” the AP reported.

Protests erupted nationwide in Cuba on July 11 demanding an end to the Communist Party’s rule of the island, which began in 1959. The protests consisted almost entirely of peaceful marches and assemblies in every major city of the country and featured attendees clearly chanting “freedom!” and other anti-communist slogans. The Castro regime responded to the protests with overwhelming violence, including opening fire on unarmed protesters, publicly beating individuals believed to be participating in protests, and allegedly torturing and sexually assaulting those imprisoned.

Human rights activists and members of the Cuban exile community have urged Biden to take action against the regime through sanctions, weapons aid, or restoring internet access to Cuban users after the Castro regime shut it down. Republican lawmakers – many of them representing large Cuban-American populations – have also requested a meeting with the president to discuss moving forward with policies to aid the dissidents. Biden responded by organizing the Estefan Zoom meeting and sanctioning one Cuban official who predecessor Donald Trump had already sanctioned, a move panned as “symbolic but meaningless.”

Biden’s meeting Friday will reportedly focus on restoring internet to the island to allow Cubans to share videos of police brutality and other real-time oppression by the Castro regime. At the top of the AP’s invite list is music artist Yotuel Romero, formerly of the rap group Orishas. Romero is one of several Cuban artists behind the hit single “Patria y Vida,” released this February as a protest anthem against the regime. The song’s title, which translates to “Fatherland and Life,” is an inversion of the Communist Party slogan patria o muerte, meaning “fatherland or death.”

Patria y vida has become a rallying cry and representative slogan of the protest movement in Cuba and the diaspora.

Prior to “Patria y Vida,” however, Yotuel’s former group was a darling of the Castro regime. Prior to 2021, the archives of Granma, the official newspaper of the Cuban Communist Party, reveal a significant amount of positive coverage of both Romero and the Orishas, fueled by compliant interviews with the rapper himself.

Speaking to Granma in 2016 about the Orishas reuniting that year for the first time in eight years, Romero said, “We always had good relations with our country. For example, in this reunion we have had all the support of Cuban music institutions.” All Cuban artistic institutions are government-run, through the Ministry of Culture; Cuba made it illegal to write songs, draw, or film anything without a preemptive permit from the Ministry in 2019.

Also on the reported guest list for Biden’s event is Ana Sofía Peláez, the co-founder of the Miami Freedom Project, a liberal policy advocacy group. The project claims to advocate for climate change, immigration, and “racial justice” issues, all prominent left-wing policy issues and many not especially popular in the overwhelmingly Republican Cuban-American community. Prior to founding the group, Peláez was most famous as a food writer, having launched her blog Hungry Sofia in 2008.

The Associated Press also reported the presence of L. Felice Gorordo, a tech entrepreneur who worked on “Latino, immigration, and business outreach” in the Obama White House. Obama-era reports identify Gorordo as a vocal advocate for Obama’s disastrous Cuba policy – largely consisting of economic concessions to dictator Raúl Castro in the form of enhanced U.S. tourism to the island that resulted in astronomical numbers of politically motivated arrests and oppression on the island. 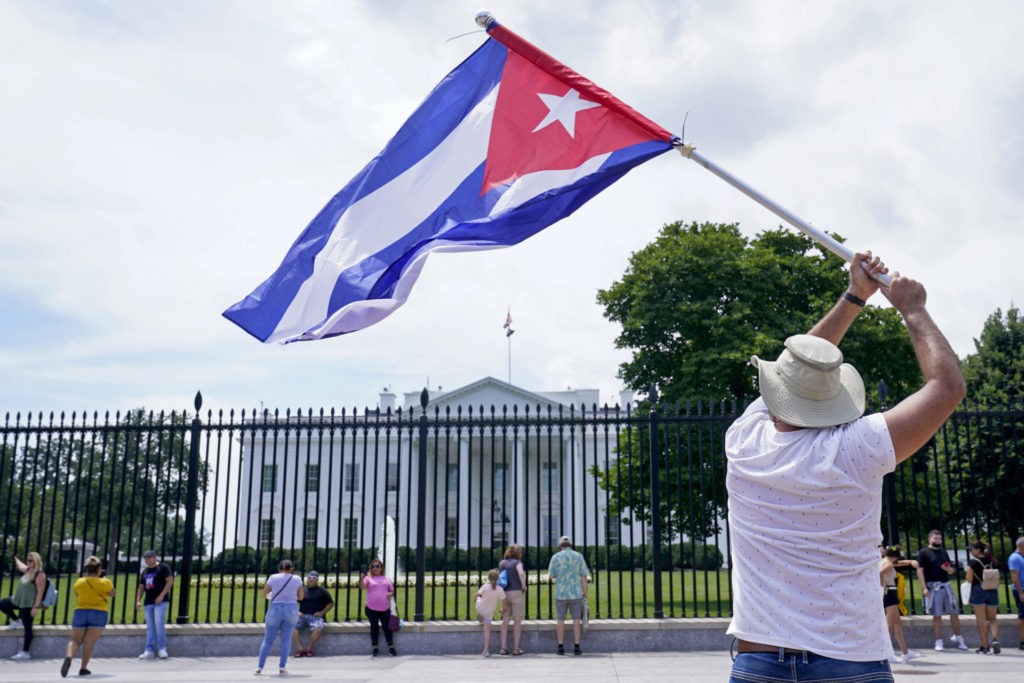 People participate in a rally outside the White House in Washington in support of the protesters in Cuba. The problems of two tiny Caribbean states, Cuba and Haiti, have vexed U.S. presidents for decades. Now, Haiti and Cuba are posing a growing challenge for President Joe Biden that could have political ramifications.(AP Photo/Susan Walsh)

The last name on the Associated Press’s list is Manny Díaz, the former mayor of Miami now serving as the chair of the increasingly unpopular Florida Democratic Party.

An outlier on the reported guess list, who the Associated Press did not name, is human rights activist Rosa María Payá of the Cuba Decide movement. Florida’s WPLG Local 10 reported her expected presence at the meeting Friday. Payá, unlike most of the other names on the list, is one of the most prominent voices in the Cuban exile community against communism, organizing efforts in support of free and democratic efforts on the island and advocating for justice in the name of the victims of the regime. Payá’s father, Oswaldo Payá, founded the island’s Christian Liberation Movement, an anti-communist group. The Castro regime is widely believed to have killed Payá and fellow activist Harold Cepero in a car “accident” in 2012.

The White House has yet to confirm the reported guest list.