The idea seems to have been abandoned after Joshua Vlasto, a communications consultant at Kivvit and former Chief of Staff to Cuomo, reportedly said in an email to a “former consultant,” “Don’t think we want to be getting down with that crowd.”

“That crowd” may refer to Steve Cohen, a former assistant U.S. attorney in Manhattan, former Counselor and Chief of Staff to Cuomo, whose alleged LinkedIn profile suggests he “has brought a strategic approach to managing and ‎solving complex issues, and an ability to achieve results by coordinating ‎legal skills with a deep understanding of media, government, and ‎politics. ”

Steve Cohen, a longtime Cuomo adviser and former assistant U.S. attorney in Manhattan, was pushing to release oppo on Joon Kim, the former acting U.S. attorney who led the investigation into Cuomo pic.twitter.com/XlsgctDDLE

While Cuomo’s defense playbook may not have included spreading opposition research, it did include fighting the release of the investigative report Tuesday by publishing photos of Cuomo hugging politicians and other politicians hugging people.

Another photo shows Cuomo and President Joe Biden holding each other, while looking into each others eyes, smiling, without masks. 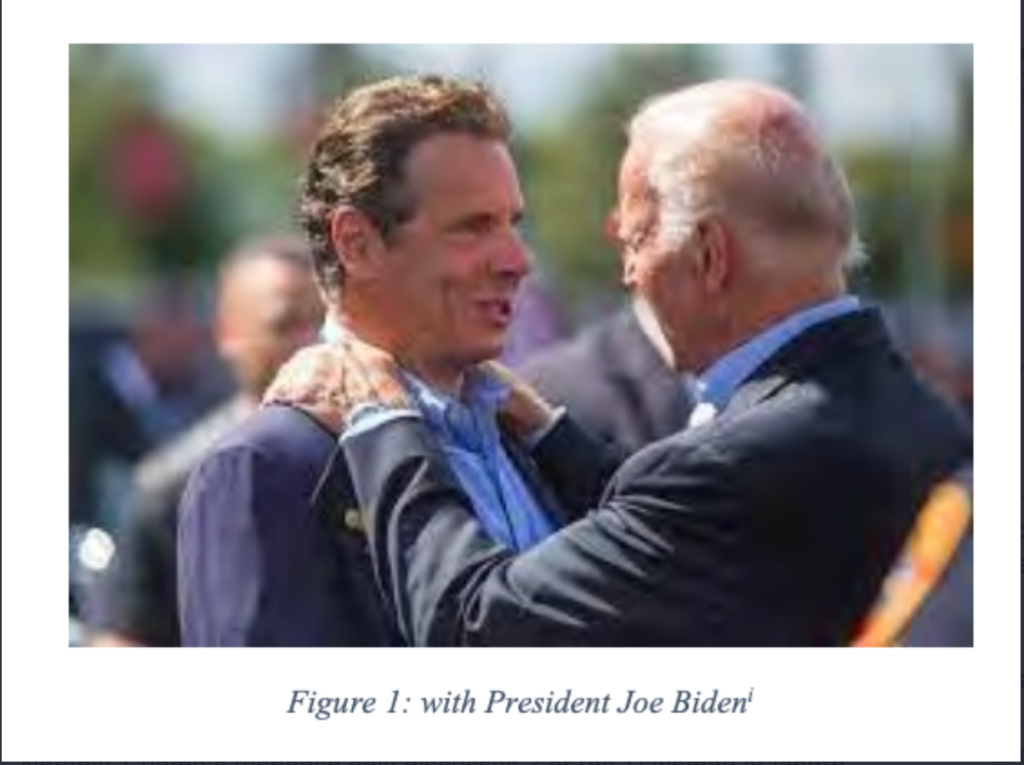 Gov. Cuomo has released an 85-page written response to the independent investigation, but it’s only 26 pages of text. Most of the rest is dozens of photos of him hugging people and other politicians hugging people: https://t.co/qjNW1idpOY pic.twitter.com/AmyfNpKzXG

Governor Cuomo rejected on Tuesday the findings of the independent investigative report by New York Attorney General Letitia James due to “the facts” being “much different than what has been portrayed.”

“I never touched anyone inappropriately or made inappropriate sexual advances,” he stated. “That is just not who I am or who I have ever been.”

“The facts are much different than what has been portrayed,” Gov. Cuomo says, rejecting the detailed findings and exhaustive investigation by the New York attorney general. “I never touched anybody inappropriately …or made inappropriate sexual advances.”

James announced Tuesday the investigation “revealed conduct that corrodes the very fabric and character of our state government and shines light on injustice that can be present at the highest level of government.”

So far, the entire Democrat delegation from New York State has called on Cuomo to resign.