The Democrat mayor, who is already forcing New York City’s indoor restaurants and gyms to discriminate against the unvaccinated by denying them service, announced that the New York City Department of Health will issue an order “requiring all staff in the New York City Public Schools to be vaccinated.”

“This will require that all staff of every kind — principals, teachers custodians, food service, you name it — needs to have at least one dose by September 27. The entire staff by September 27, at least one dose. And we know this is going to help ensure that everyone is safe,” de Blasio said, failing to mention the vaccine efficacy rate is waning — an issue that prompted federal health officials to issue a joint statement last week announcing the need for coronavirus booster shots. 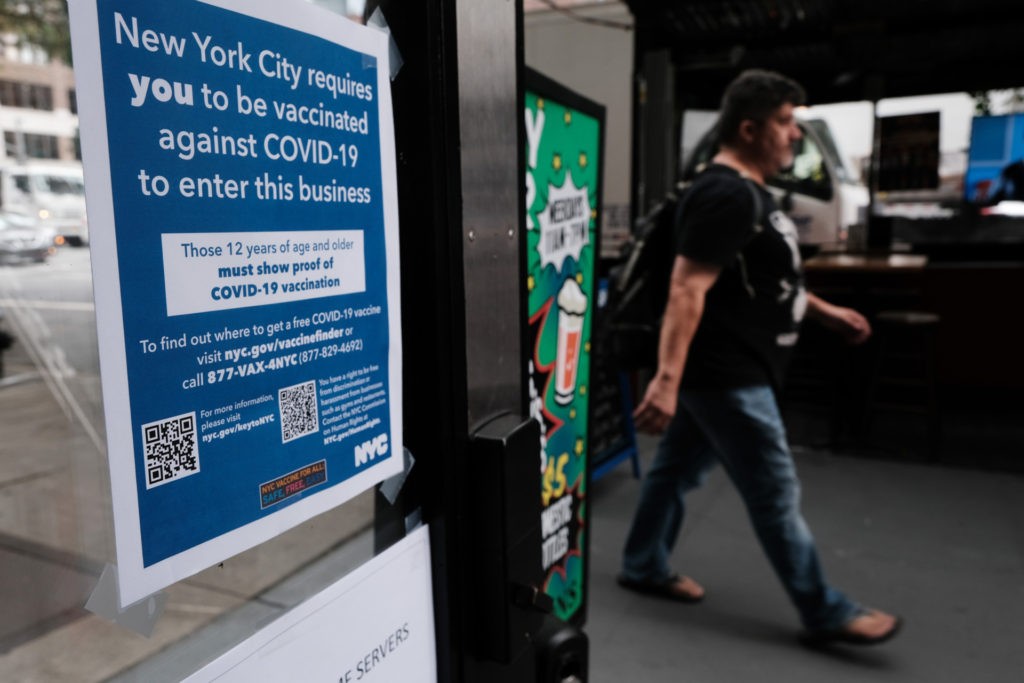 A sign in a restaurant window informs customers that they will need to show proof that they are at least partly vaccinated for Covid-19 to be allowed in the business on August 20, 2021 in New York City. New York City has begun checking people’s vaccination status at museums, gym’s, restaurants and other public establishments as it becomes the nation’s largest city to exclude the unvaccinated from public places. (Spencer Platt/Getty Images)

The Democrat mayor added that he will “immediately” begin working with labor unions following this announcement. According to the New York Times, the mandate will affect roughly 148,000 city employees.

New York City is not the only area mandating educators and staff to be vaccinated. This month, California became the first state in the nation to not only require vaccines for healthcare workers but require a vaccine or weekly testing for teachers and staff as well:

The new policy applies to both public and private schools and will affect more than 800,000 employees, including about 320,000 public school teachers and a host of support staff such as cafeteria workers and cleaners, the state Department of Public Health said. It will also apply to school volunteers.

Washington State will implement a similar policy. Democrat Gov. Jay Inslee (D) last week announced an educator vaccine requirement, giving teachers and staff until October 18 to be fully vaccinated “as a condition of employment,” per the governor’s office.

Superintendent of Public Instruction Chris Reykdal referred to the mandate as a “key mitigation measure to protect the health and safety of our students, staff, and families.”

There are limited exceptions, only those for a disability or religious beliefs.

The New York City mayor’s announcement follows his routine touting of the Key to NYC Pass, a program that forces indoor businesses, including restaurants and gyms, to discriminate against the unvaccinated. Businesses that fail to comply can face thousands in fines, de Blasio announced last week, although enforcement of the policy will not begin until September.