Tea Party Patriots Action (TPPA) is holding several nationwide protests Saturday against coronavirus-related mandates — including those for both masks and vaccines — as part of the “Just Say No” campaign.

As of Tuesday, the organization confirmed more than 60 events planned across the country:

“Enough is enough. Vaccine and mask mandates should offend every American. Mask mandates in our schools don’t help children, and can actually cause harm to them as they develop,” TPPA honorary chairman Jenny Beth Martin said in a statement: 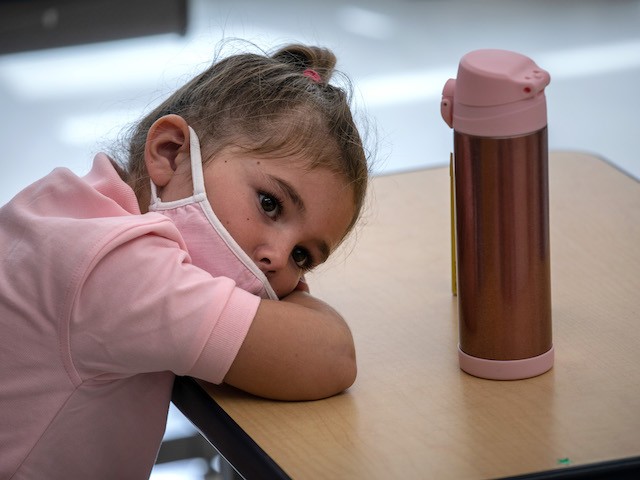 STAMFORD, CONNECTICUT – SEPTEMBER 09: Harper Shea (5), lays her head down on her desk near the end of her first day of kindergarten on September 9, 2020 in Stamford, Connecticut. For millions of kindergartners attending in-school classes for the first time, wearing masks and social distancing at school isn’t just the new normal; it is the normal. Life in a time of coronavirus will forever be the way they began their scholastic career. Harper attends Rogers International School, a magnet K-8 school, which is part of Stamford Public Schools. The district is using a hybrid model, which includes both in-school classes and distance learning (Photo by John Moore/Getty Images).

“Wanna-be tyrants are loving this moment in history, and will continue rolling back our rights unless we the people start speaking up and making our voices heard,” she continued, explaining that it remains the “purpose” behind Saturday’s events.

“[It’s] to remind the wanna-be tyrants they work for us, not the other way around. We will stand and speak up for ourselves, our children, our communities, and our country.  We will not be silenced. Not now or ever,” she added.

The “Just Say No” campaign targets what the organization describes as “unAmerican medical mandates.”

A person holds up a protest sign as people gather at City Hall to protest vaccine mandates on August 09, 2021 in New York City. NYC Mayor Bill de Blasio announced last week that as of August 16th proof of coronavirus (COVID-19) vaccination will be required to attend indoor restaurants, gyms, and entertainment venues with enforcement of the mandate to begin on September 13th. Gov. Andrew Cuomo also announced a vaccination mandate for state employees and patient-facing health care workers at state hospitals with an option to get weekly testing. According to CDC data, NYC is now considered a “high” or “substantial” COVID transmission area, after an increase in coronavirus (COVID-19) infections. The Delta variant now accounts for over 80% of all positive cases in NYC (Photo by Michael M. Santiago/Getty Images).

“This is urgent. As Winston Churchill stated so eloquently, now is the time to fight, because it will only get harder to defend our liberty. It will not get easier,” TPPA said.

“I’m not going to be forced to take an experimental vaccine that potentially could injure me or kill me,” Jane Nymberg, one nurse for Atrium Health, said. “The chances of that are low. But if it happens, I will be responsible.”