Pro-choicers can now count The Satanic Temple among their list of allies in the fight against the recent anti-abortion law in Texas.

Two years after challenging a pro-life law in Missouri, the satanic group that claims to be little more than a collection of theatrical atheists have now “filed a letter with the U.S. Food and Drug Administration arguing that its Texas members should have legal access to abortion pills,” according to the San Antonio Current.

In the letter addressed to the FDA, Lucien Greaves, the Temple’s spokesman and cofounder, argued that the abortion drugs Misoprostol and Mifepristone should be allowed under the Religious Freedom Restoration Act (RFRA) so as to be used in what the Temple referred to as their “Abortion Rituals.”

I am sure Texas Attorney General Ken Paxton — who famously spends a good deal of his time composing press releases about Religious Liberty issues in other states — will be proud to see that Texas’s robust Religious Liberty laws, which he so vociferously champions, will prevent future Abortion Rituals from being interrupted by superfluous government restrictions meant only to shame and harass those seeking an abortion.

The battle for abortion rights is largely a battle of competing religious viewpoints, and our viewpoint that the nonviable fetus is part of the impregnated host is fortunately protected under Religous Liberty laws.

The Satanic Temple previously cited the Religious Freedom Restoration Act to overturn a set of pro-life laws in Missouri, but the U.S. Supreme Court declined to hear it. 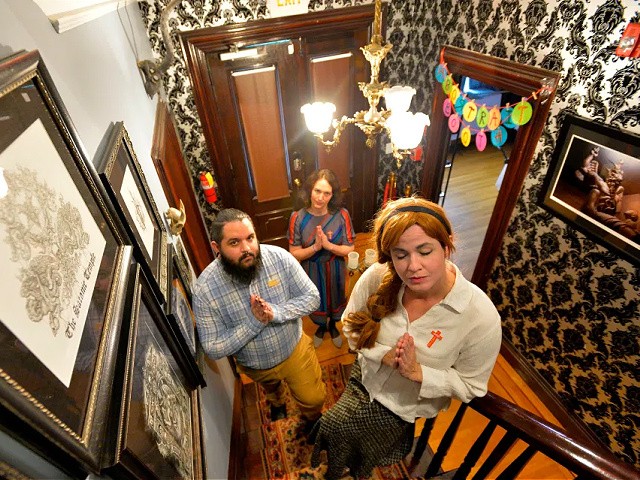 The cast members of the Hell House Mercy Maelica, Cameron Willson (L) and Joy Davenport (C) pose for a photo at the Satanic Temple where a “Hell House” is being held in Salem, Massachusetts on October 8, 2019. – The Hell House was a parody on a Christian Conversion centre meant to scare atheist and other Satanic Church members. (Photo by Joseph Prezioso / AFP) (Photo by JOSEPH PREZIOSO/AFP via Getty Images)

The Satanic Temple bills itself as a non-theistic organization dedicated to reason and uses Satanic imagery as little more than a tool to troll Christians. Its website states:

The mission of The Satanic Temple is to encourage benevolence and empathy among all people, reject tyrannical authority, advocate practical common sense, oppose injustice, and undertake noble pursuits. The Satanic Temple has publicly confronted hate groups, fought for the abolition of corporal punishment in public schools, applied for equal representation when religious installations are placed on public property, provided religious exemption and legal protection against laws that unscientifically restrict women’s reproductive autonomy, exposed harmful pseudo-scientific practitioners in mental health care, organized clubs alongside other religious after-school clubs in schools besieged by proselytizing organizations, and engaged in other advocacy in accordance with our tenets.

Last Wednesday, the Supreme Court decided 5-4 not to block the Lone Star State’s new law banning most abortions after six weeks of pregnancy, while allowing citizens to sue abortion providers and anyone who aids in abortion for up to $10,000 in damages.