John Kerry, the Biden administration’s Special Presidential Envoy for Climate, issued a stark warning Wednesday about the fate of the world unless swift action is taken against climate change.

“There are 20 countries that are responsible for about 80 percent of all the emissions in the world, and if those countries are not doing enough, the rest of the world is doomed by their actions — or lack of actions, as the case may be,” Kerry said during his remarks before Latin American leaders, who he praised for their actions to tackle global warming, The Hill reports.

“Today, I’m able to announce that we have plans to scale up our assistance for the renewable energy for Latin America and the Caribbean — a regional effort led by President Duque of Colombia — in order to increase renewable energy capacity to at least 70 percent across the region by 2030.” 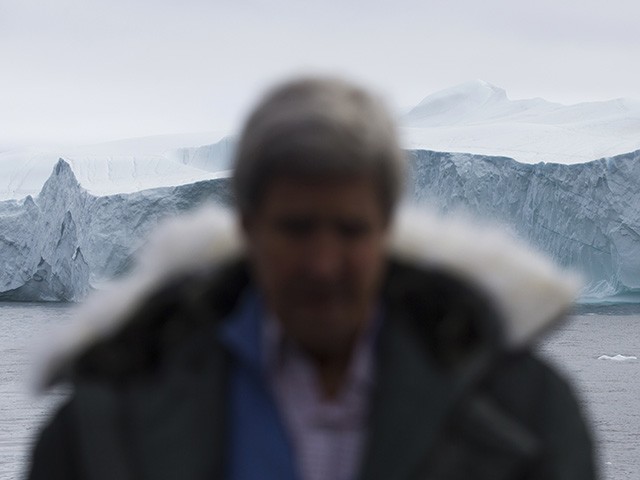 Secretary of State John Kerry makes speaks during a tour the Jakobshavn Glacier and the Ilulissat Icefjord, near the Arctic Circle, Friday, June 17, 2016, in Ilulissat, Greenland. (AP Photo/Evan Vucci, Pool)

“This is the moment,” he added. “We need the major economies, the 20 nations that constitute the 80 percent, to step up, and we need to lay out clear plans for what we will do.”

Kerry’s comments come after a failed trip to China, where Beijing rebuffed the Biden official’s call to cooperate on climate change, citing fraying relations over a host of issues between the two nations.

“China is ready to cooperate with the United States and the international community on climate change. That said, I’d like to stress that China-U.S. cooperation in specific areas, unlike flowers that can bloom in a greenhouse despite winter chill, is closely linked with bilateral relations as a whole,” China’s Foreign Ministry said.

“China has emphasized time and again that no one should imagine they could ask China to understand and support them in bilateral and global affairs when they blatantly interfere in China’s domestic affairs and undermine China’s interests. We hope the United States can create favorable conditions for coordination and cooperation with China in major areas.”

China’s state-run Global Times criticized Kerry’s visit, saying it was “quite absurd” for the Biden government to believe it can separate “cooperation on climate issues” from other challenges between the U.S. and China.