The wildfires raging in the western United States are not caused by climate change but by “eco-imperialists” who oppose forest management that could prevent natural seasonal fires from becoming massive and destructive wildfires, experts said Thursday on a call with reporters.

“The basic problem with our national forests and our BLM [Bureau of Land Management] forest is too many trees,” Myron Ebell, director of the Center for Energy and Environment at the Competitive Enterprise Institute, said. “We have thickets, not forests.”

“California, they have four times too many trees per acre,” Ebell said. “The national forests have about eight times more fuel or fiber every year. So, every year, this problem becomes worse.”

The solution is to thin those trees, these experts said — something that happened regularly when forests were logged. However, the logging industry has basically been put out of business by environmentalists opposed to the practice. 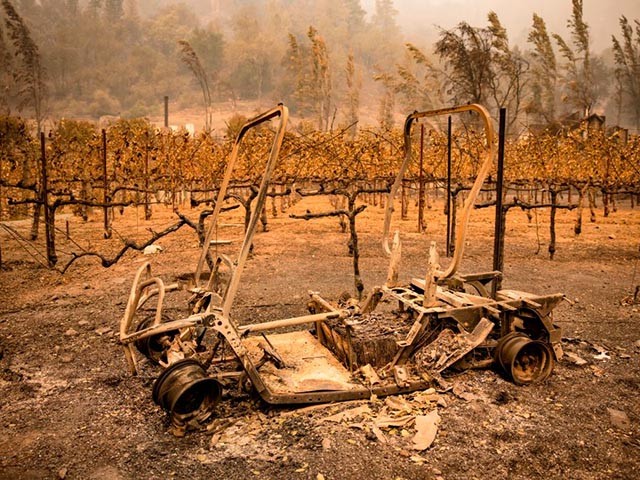 The remains of a golf cart burned by the Glass Fire sits next to a vineyard at Calistoga Ranch in Calistoga, Napa Valley, California on September 30, 2020. – Two California wildfires that ravaged Napa’s famous wine region and killed three people exploded in size Tuesday as firefighters faced a weeks-long battle to contain the blazes. (Photo by SAMUEL CORUM/AFP via Getty Images)

Prescribed burns can also be used, but in California, compliance with the Clean Air Act becomes an issue, Ebell said.

Moreover, out of control wildfires are not about weather but politics,” Ebell said.

“There’s a huge political problem here,” said Ebell, who called politicians like Democrat California Gov. Gavin Newsom and Rep. Jared Huffman (D-CA), former senior attorney with the Natural Resources Defense Council, “eco-imperialists” who blame climate change for wildfires while not taking action to prevent them based on their environmental activism.

“The current forest management policy is so bad that it just staggers the imagination, and you’ve got to wonder why are environmentalists even letting this occur,” Milloy said. “Is it just negligence, or is there something more to it?” 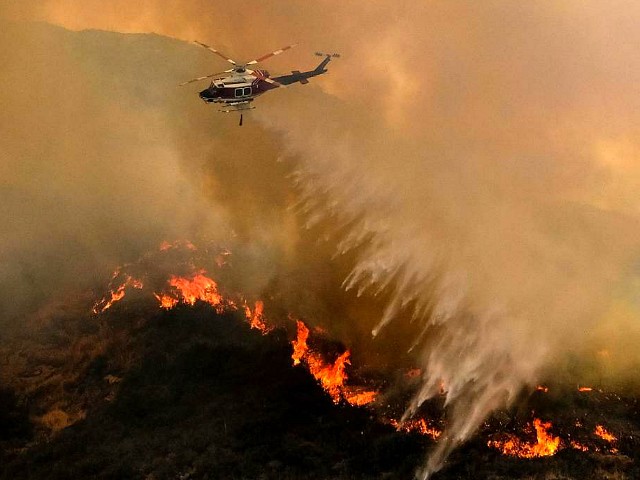 A helicopter drops water to a brush fire at the Holy Fire in Lake Elsinore, California, southeast of Los Angeles, on August 11, 2018. – The fire has burned 21,473 acres and was 29 percent contained as of 8:30 a.m. Saturday, according to the Cleveland National Forest. (RINGO CHIU/AFP/Getty Images)

“Are they maybe sacrificing, letting California burn for their political agenda — to make the point every year?” Milloy said.

Everyone on the call countered the narrative that manmade climate change is behind the wildfires and other weather conditions.

“The main point I would like to make is that there has been no short-term or long-term increase in wildfires, just an increase in media alarmism and climate activist alarmism regarding the issue,” James Taylor, president of the Heartland Institute said on the call. “If we’re talking wildfires in connection to global warming or global climate change, then we have to look at global data.” 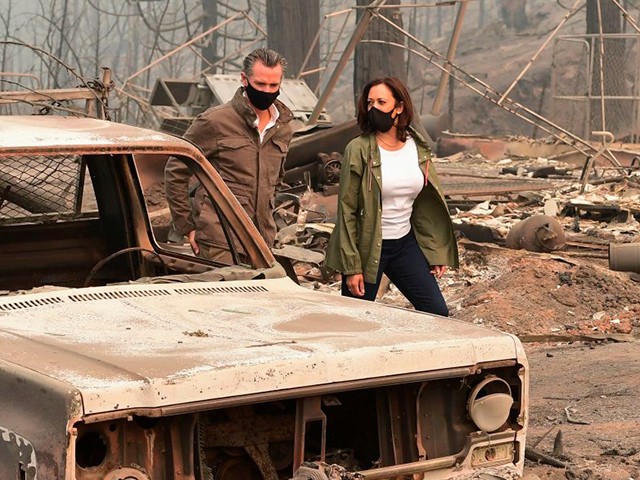 US Democratic vice presidential nominee and Senator from California, Kamala Harris and California Governor Gavin Newsom visit the scene of fire-ravaged property from the Creek Fire across from Pine Ridge Elementary School in an unincorporated area of Fresno, California on September 15, 2020.  (Photo by FREDERIC J. BROWN/AFP via Getty Images)

Taylor said data from NASA show that global wildfires have declined 24 percent since the turn of the century.

Like others on the call, Taylor called for “pro-active forest management” to keep wildfires from getting out of control.

“There’s three things you need for forest fires to occur: it’s fuel, aridity or drought, and an ignition source, ” Gregory Wrightstone, executive director of the CO2 Coalition, said on the call. “All of those have been exacerbated and made more problematic by man’s actions, not by climate change.”

Wrightstone, who is a geologist, also said drought is not the result of climate change.

“The current western drought has been called unusual and unprecedented — we’ve not seen anything like this in 1,000 or more years, which is categorically false,” Wrightstone said. “When you look at the history, the geologic data, the Paleoclimate data, they tell us that there were many, many other periods in the southwest and western United States that experienced much more intense droughts than we are today.” 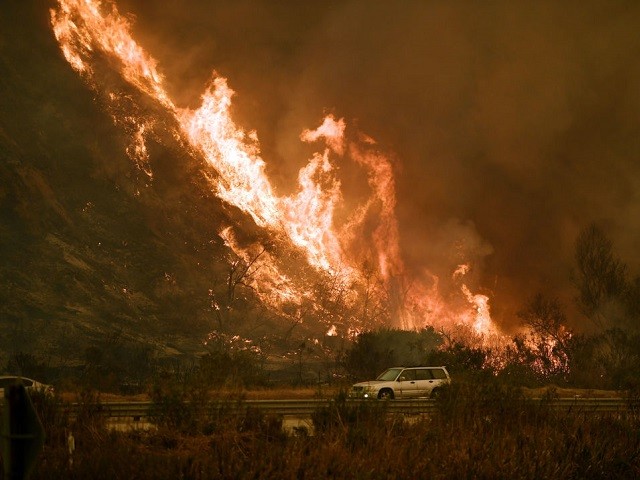 Vehicles pass beside a wall of flames on the 101 highway as it reaches the coast during the Thomas wildfire near Ventura, California on December 6, 2017. California motorists commuted past a blazing inferno Wednesday as wind-whipped wildfires raged across the Los Angeles region, with flames triggering the closure of a major freeway and mandatory evacuations in an area dotted with mansions. (Photo credit should read MARK RALSTON/AFP/Getty Images)

Taylor said on the call that most people are not taken in by the claims of manmade climate change.

“I believe that outside of the climate activists movement, which happens to align pretty much with folks in the political left, most of the country is either quite skeptical about the asserted climate crisis, or may have some concern, but realize that these claims over and over again are overblown.”