President Joe Biden’s administration is planning to resettle the first group of Afghans brought to the United States across 46 states with many headed to battleground and swing states like Arizona, Florida, Georgia, and Texas.

Biden has said he hopes to resettle about 95,000 Afghans across the U.S. over the next 12 months. In a 21-day period from August to September, Biden brought more than 48,000 Afghans to the U.S. for resettlement — a population more than four times that of Jackson, Wyoming.

An initial 37,000 Afghans will be resettled by the Biden administration across 46 states, according to numbers published by the Associated Press and Axios this week. California will get the most Afghans, 5,255, while Texas will have nearly 4,500 Afghans resettled in the state.

In major swing states, thousands of Afghans will be resettled, including: 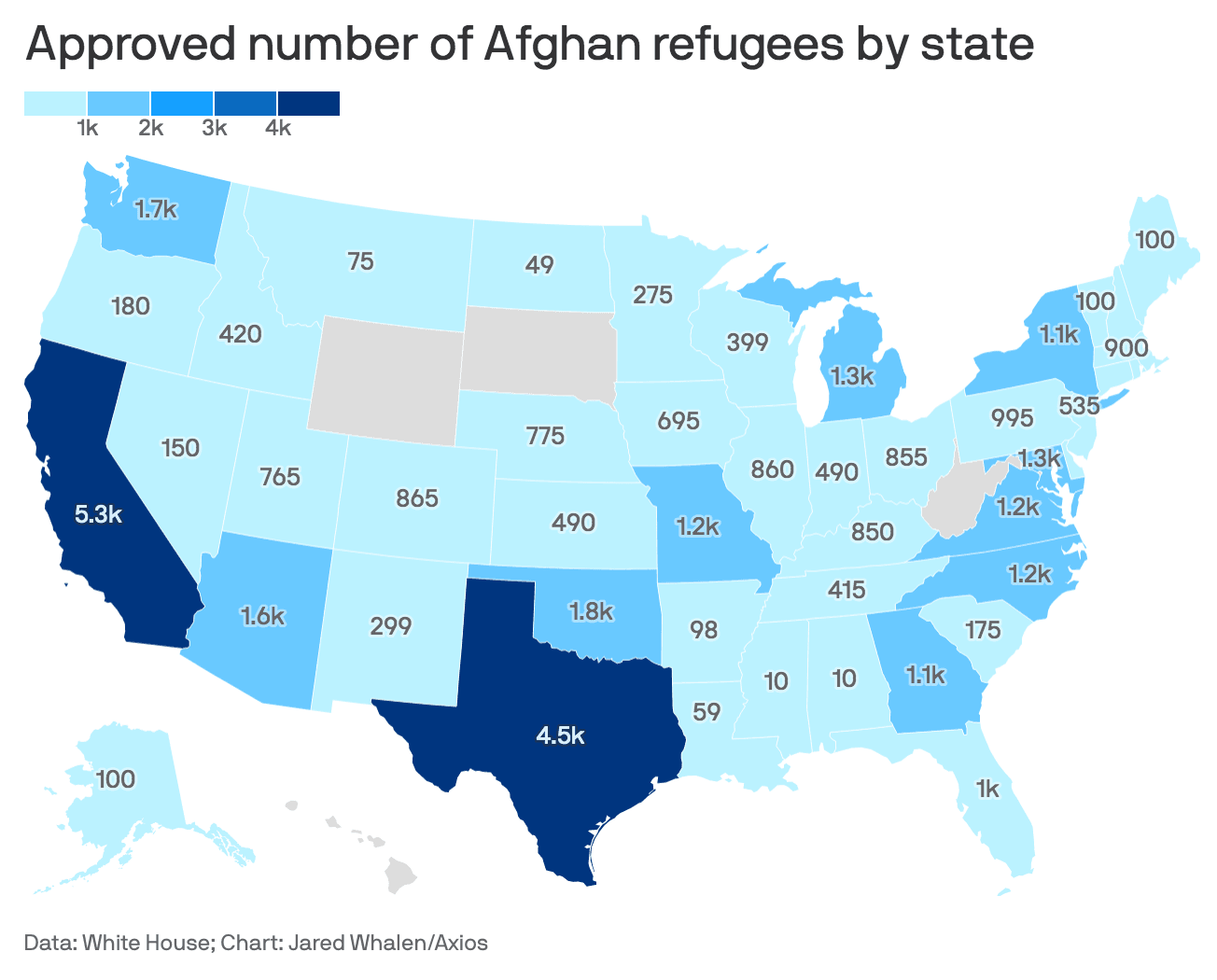 Many red states, such as Oklahoma, Montana, Missouri, North Dakota, and Tennessee, will have hundreds of Afghans resettled in their states as well, along with deep blue states like Washington, Connecticut, New York, and Oregon.

An official told Axios that no Republican governors balked at having the Biden administration resettle Afghans in their states:

In conversations with nearly every state on Wednesday, not one official declined to take in Afghans, one senior administration official told Axios. “I have to say it was a very warm conversation with state and local leaders.” [Emphasis added]

No Afghans, for now, will be resettled in Hawaii, South Dakota, West Virginia, Wyoming, or Washington, D.C.

Rep. Matt Rosendale (R-MT) said Afghans ought to be resettled in countries close to Afghanistan with similar languages and cultures, not the U.S.

“Following the Biden Administration’s disastrously mismanaged withdrawal from Afghanistan, I warned that we could not use this Administration’s incompetence to justify flooding our communities with unvetted refugees,” Rosendale said:

The traditional vetting process for these individuals is a 14-step procedure, that takes well over a year. The mass evacuation of over 100,000 Afghan nationals in a matter of weeks has made proper vetting of these individuals near impossible. At this time, it appears extremely unlikely the Biden Administration properly vetted the Afghan nationals being resettled in Montana. I have advocated that we should try and settle these individuals in other countries around Afghanistan that share their values and culture, especially if we can not ensure proper vetting. As elected officials, it is our duty to protect the citizens we represent—and I will not allow this Administration to compromise the safety of Montanans. [Emphasis added]

As Breitbart News reported, Afghans will get roughly $1,250 payments before getting resettled in states. The Biden administration, though, is hoping Congress opens up a slew of welfare programs to all Afghans being resettled, including food stamps, cash assistance, and Medicaid.

The resettlement operation is being bankrolled by not only American taxpayer money funneled through a number of refugee contractors but also multinational corporations and a non-governmental organizations (NGO) backed by former Presidents Bill Clinton, George W. Bush, and Barack Obama.

The Clinton-Bush-Obama NGO is expected to work with Biden in privatizing refugee resettlement so that NGOs and corporations can bring refugees to the U.S.