Some of the injuries they have caused are hideous, with at least one person nearly blinded, and a woman of 70 knocked to the floor with a broken hip and pepper sprayed in her face, as ABC News reported.

But don’t worry, it’s OK: it’s all being done for the good of Australia’s health.

The latest confrontations between police (heavily armed, dressed like Robocop) and demonstrators have taken place at the city’s Shrine of Remembrance, as local outlet Nine News reports.

Police fire rubber bullets at people gathering at the Shrine of Remembrance War Memorial in Melbourne to protest against lockdowns.pic.twitter.com/o8O9zyatrS

NOT in my AUSTRALIA

For heavily armed Vic Police to be pointing & firing guns at peaceful, unarmed protesters as they leave Melbourne’s Shrine of Remembrance

A direct attack on our Democracy

But social media is abundant with footage of protests which have been taking place in cities across Australia in the last few days, including violent confrontations with the police, as Breitbart News reported. 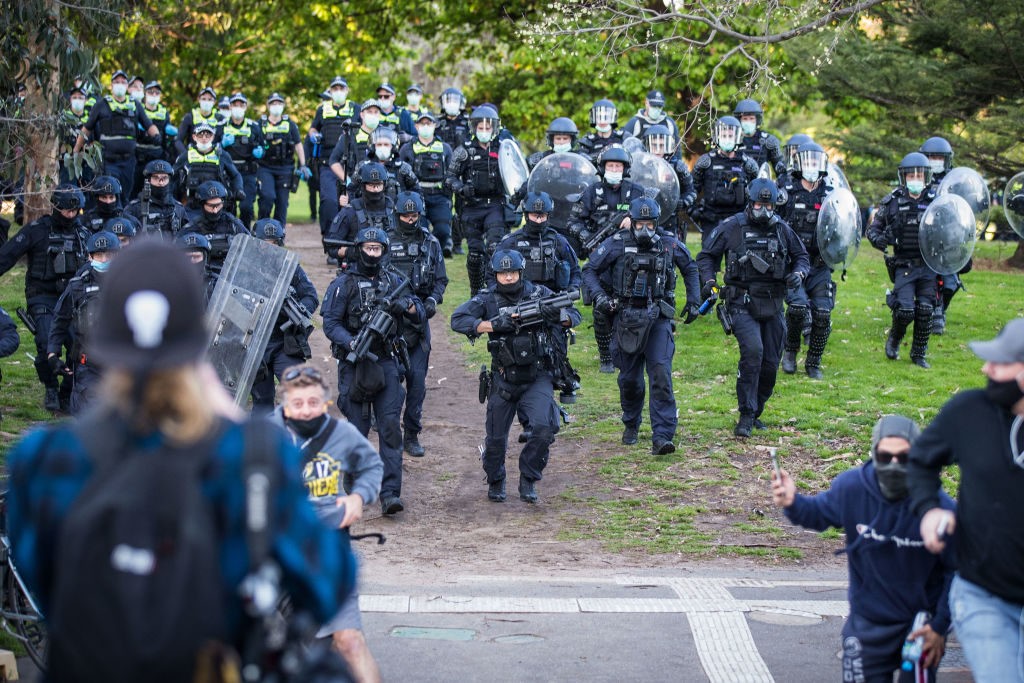 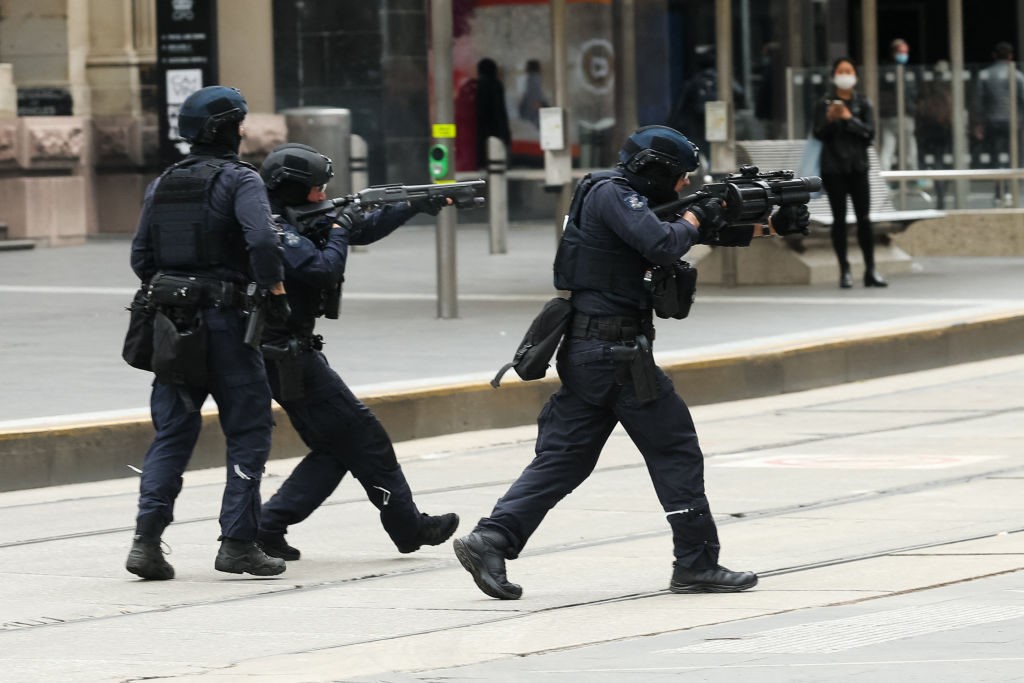 Melbourne police have sought to disguise the extent of the protests by ordering a ban on helicopter flights so the rally cannot be filmed from overhead, under tight new rules that temporarily shut down the city’s airspace.

The restrictions from the Civil Aviation Safety Authority, made at the request of Victoria Police, are effective until Sunday, the Melbourne AGE reports.

Victoria Police is allegedly attempting to prevent media from showing aerial pictures of the Melbourne protests.

Yes. The police are attempting to stop media from broadcasting news and information.

The protests escalated this week after one of Andrews’s traditional left-wing power bases, the CFMEU (the Construction, Forestry and Engineering Union), turned against him and their union leaders.

The tradesmen – ‘tradies’ as they are known in Australia – took to the streets and besieged their union headquarters in protest at the imposition of compulsory vaccines for construction workers.

the revolution will not be televised.

A 70 year old lady, beaten to the ground meters from my house in Melbourne, defenseless, tear gassed by two aggressive male officers, with hundreds of police storming in the background.

This tragic image will forever define and haunt the political legacy of Daniel Andrews. pic.twitter.com/Mnx0RD6chl

For the last 18 months Australia has remained largely cowed and compliant in the face of ever-increasing coronavirus restrictions.

These have included quarantine camps, curfews, CCP style surveillance in the form of “forced” facial recognition and geolocation scanning sent to the government within 15 mins of a text. 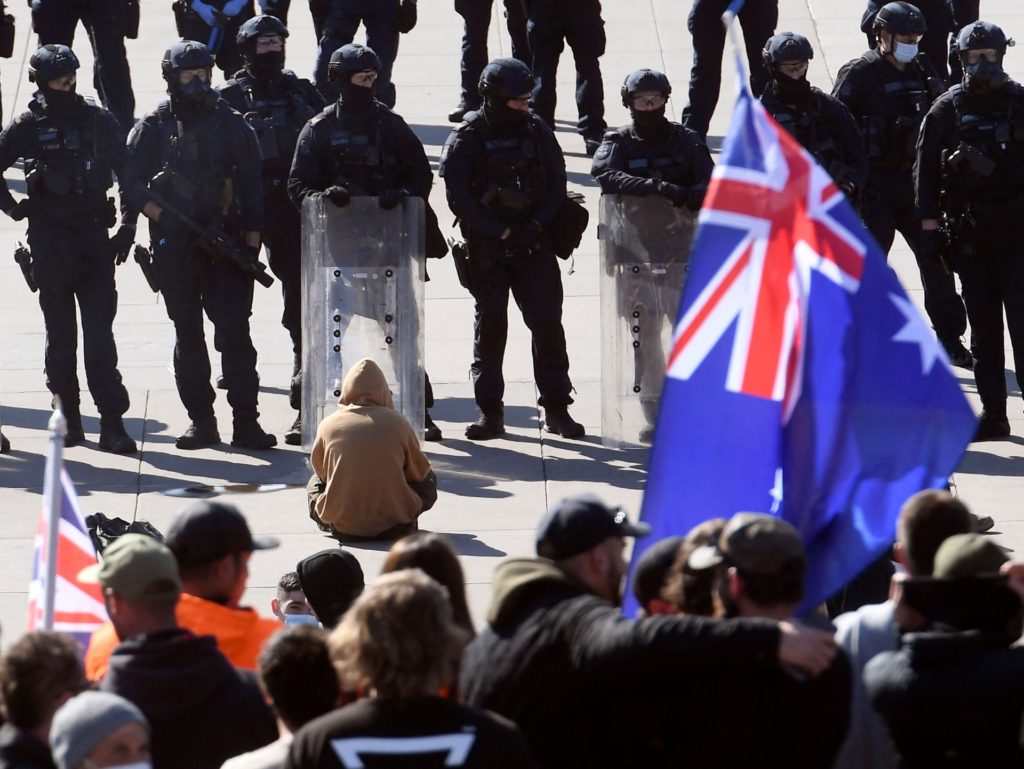 Police stand guard as construction workers and demonstrators on the steps of the Shrine of Remembrance protest against Covid-19 regulations in Melbourne on September 22, 2021. (WILLIAM WEST/AFP via Getty Images)

Other restrictions include quarantine signs on people’s doors as if they were Medieval plague victims, denying services to the unvaccinated and treating them like pariahs,  arbitrary restrictions on the quantity of beer you are allowed to order for home delivery, and ever escalating police brutality.

Here’s the incident I referred to in a previous tweet. This head stomp was found to be lawful use of force.

But at least a portion of the Australian population is waking up and fighting back with spirit.

What’s happening now in Australia is almost unimaginable in a nation which, till recently, gave the impression of being a liberal Western democracy.

Perhaps this explains what could be a divine signal of disapproval…