A San Antonio-based abortionist admitted at the Washington Post he performed an abortion on a woman after her baby’s fetal heartbeat had been detected, an act that has drawn two lawsuits which, he said, could serve to test “this blatant unconstitutional” law.

Alan Braid referred in his op-ed Saturday to his business of performing abortions on unborn babies “up to the legal limit of 22 weeks” as “providing compassionate care.”

He wrote that “on the morning of Sept. 6, I provided an abortion to a woman who, though still in her first trimester, was beyond the state’s new limit.”

“I acted because I had a duty of care to this patient, as I do for all patients, and because she has a fundamental right to receive this care,” he said, adding he “fully understood that there could be legal consequences – but I wanted to make sure that Texas didn’t get away with its bid to prevent this blatant unconstitutional law from being tested.”

Braid, who asserted abortion “is an essential part of health care,” said he knows he is “taking a personal risk, but it’s something I believe in strongly.”

“Represented by the Center for Reproductive Rights, my clinics are among the plaintiffs in an ongoing federal lawsuit to stop S.B. 8,” he wrote.

Pro-Life Victory! The Texas legislature passed a bill that will outlaw abortions in the state once a fetal heartbeat is detected and sent it to the governor. https://t.co/NWPqKkGPhU

The Texas law, which went into effect September 1, prohibits abortions once a fetal heartbeat is detected, generally at six weeks’ gestation.

The measure, however, contains a unique enforcement mechanism whereby any private citizen may file a civil lawsuit against an abortion provider or any other individual who “aids or abets” a “criminal abortion.” Abortionists and those who “aid or abet” an abortion after a fetal heartbeat is detected must pay damages of at least $10,000 for each abortion performed or assisted.

As Agence France-Presse (AFP) reported Monday, the first lawsuit filed against Braid was with a district court in Texas “by a self-described ‘disbarred and disgraced’ former lawyer in the neighboring state of Arkansas.”

Oscar Stilley, who is serving a 15-year sentence for tax fraud under home confinement, delivered what AFP referred to as a “rather eccentrically worded complaint against Braid.” 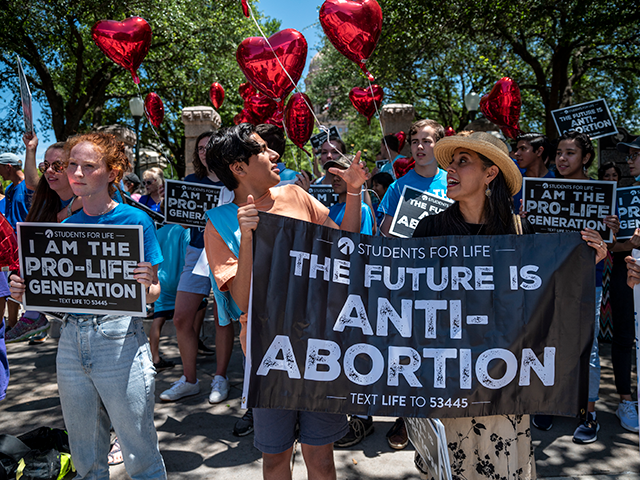 Pro-life backers stand near the gate of the Texas state capitol at a protest on May 29, 2021. Thousands of protesters came out in response to a new bill outlawing abortions after a fetal heartbeat is detected signed on Wednesday by Texas Governor Greg Abbot. (Sergio Flores/Getty Images)

“I don’t want doctors out there nervous and sitting there and quaking in their boots and saying, ‘I can’t do this because if this thing works out, then I’m going to be bankrupt,’” Stilley said, according to the Associated Press.

The Chicago Tribune reported Wednesday that former lawyer Felipe Gomez also filed a lawsuit against Braid with the intention of “holding officials in Texas accountable by having the law be examined in the courts.”

“I don’t have a difference with the defendant, per se,” Gomez said. “The difference is with the writer of the law.”

“Part of my focus on this is the dichotomy between a government saying you can’t force people to get a shot or wear a mask and at the same time, trying to tell women whether or not they can or can’t get an abortion,” said Gomez, whose license is suspended, reported the Tribune. “To me, it’s inconsistent.”

Neither of these lawsuits are valid attempts to save innocent human lives.

Texas Right to Life said in a statement Monday neither of the lawsuits by “two disbarred attorneys” against Braid “are valid attempts to save innocent human lives.”

“Both cases are self-serving legal stunts, abusing the cause of action created in the Texas Heartbeat Act for their own purposes,” the pro-life organization asserted, adding, “We believe Braid published his op-ed intending to attract imprudent lawsuits, but none came from the Pro-Life movement.”

“Texas Right to Life is resolute in ensuring the Texas Heartbeat Act is fully enforced and we believe Braid’s effort will fail just like the abortion industry’s other legal attacks on the law so far,” the group said.