Rep. Dan Crenshaw (R-TX) says he is “quietly talking to Democrats” about cutting the Catch and Release process that many border crossers and illegal aliens utilize to be released and live illegally in the United States.

In an exclusive interview Thursday with SiriusXM Patriot’s Breitbart News Daily, Crenshaw told Breitbart News Editor-in-Chief Alex Marlow that allowing federal immigration officials to hold border crossers and illegal aliens for an extended time, rather than being forced to release them into the interior of the U.S., would be a “simple” fix to illegal immigration with massive impact.

The issue stems from the 1997 Flores Settlement Agreement, which judges have since expanded, where federal immigration officials are limited to holding child border crossers in custody for no longer than 20 days — regardless of whether or not they are accompanied by adults.

As a result, adult border crossers have used Flores by bringing children with them as they come to the U.S.-Mexico border in the hopes to claim “credible fear” and eventually get released into the U.S. interior with only the promise that they will show up to asylum hearings in the future.

“You just have to increase the number of days that we’re allowed to hold migrants … until processing,” Crenshaw said.

“Right now, that limit is 21 days, and because it’s 21 days, and this is for family units, this is why they bring kids with them because it guarantees them that Catch and Release status because you can’t hold them past that 21 days,” Crenshaw continued. “And you can’t adjudicate a fake asylum claim in 21 days, you need 60 to 90 days.”

There are some Democrats, Crenshaw said, that he is “quietly” speaking with to support bipartisan legislation that would allow federal immigration officials to hold adult border crossers with their children for longer than the 20-day period that Flores requires.

“I’m quietly talking to Democrats asking ‘Is there anybody who will at least change this one thing and add money for more immigration judges and facilities?’ So you know let’s make the process work … I’ve gotten some interest on that,” Crenshaw said.

“I’m going to work that,” he continued. “It would be a very simple one-page bill but would massively change what we’ve got going on right now.” 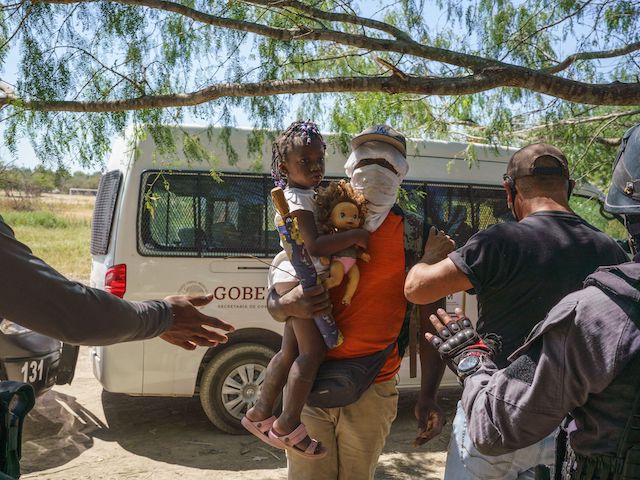 Mexican police stop a Haitian man with a young girl from crossing the Rio Grande back to the United States in Parque Ecologico Braulio Fernandez, Mexico, on September 23, 2021. (Paul Ratje/AFP via Getty Images)

President Joe Biden is currently grappling with a surge of Haitian border crossers arriving in the U.S. through the southern border. His administration has claimed that Haitians would be deported to their native country, though reports this week revealed that the Department of Homeland Security (DHS) is facilitating the release of thousands of border crossers into the U.S. interior via flights and buses.

On Thursday, White House Press Secretary Jen Psaki defended the release of Haitians into the U.S. interior, calling the process an “alternative to detention.”

“Individuals who are not immediately removed are either placed in an alternative to detention or transported to an ICE facility,” Psaki said.