After the first-ever presidential proclamation for Indigenous Peoples’ Day — which honors Native American peoples — was issued by President Joe Biden on Friday, Popovich praised the move, which has long been pushed by the left, calling it “appropriate, important, needed and all those sorts of things.”

Ahead of Friday’s Spurs-Heat preseason matchup, he also expressed confusion over San Antonio’s decision to celebrate the newly-proclaimed day along with the long-observed Columbus Day, claiming he was “a little confused about our city and why it’s [marking] Indigenous Peoples’ Day slash Columbus Day.”

He then slammed the Italian navigator who is credited with the discovery of North America.

“Columbus?” he asked mockingly. “I mean he initiated a new world genocide; that’s what he did.”

“Beginning with him and what he set in motion, what followed, [was] the annihilation of every indigenous person in Hispaniola, which was Haiti and the Dominican Republic today, that’s what he did,” he continued.

“He took slaves, he mutilated, he murdered, and we’re going to say ‘slash’ and honor him?” he added.

Praising the major Texas city’s independent school district for having, at the very least, chosen to recognize the more recent Indigenous Peoples’ Day, Popovich knocked the school district of the incorporated city of Alamo Heights.

“Well, I’ve got to give the San Antonio Independent School District a little bit of credit because at least they added Indigenous Peoples’ Day along with [Columbus Day] and that’s a step in the right direction,” he said.

“But what the hell is Alamo Heights thinking?” he added. “It’s Columbus Day, that’s why they’re off on Monday?!”

Claiming that he may be ignorant and there may be “something I’m missing,” the virulently left-wing coach said he feels “like [the school district personnel are] living in a phone booth — and they’re educating our kids.”

“Columbus Day?! And we’re going to honor that?” he added.

Calling it “no knock on Italian Americans,” he then equated support for marking Columbus Day with pride in Nazi leader Adolf Hitler.

“That’s a silly argument,” he said. “It’s like saying we should be proud of Hitler because we’re German.”

“I mean it makes no sense,” he added. “It’s about Columbus, it’s not about Italian Americans.”

Citing many states that “have come out and scratched Columbus Day and made it Indigenous Peoples’ Day” instead, he expressed amazement that the San Antonio school district would continue to recognize Columbus Day.

“In our city, are we that backward that we have school districts that do that?” he said. “I’m amazed, amazed.”

For generations, Federal policies systematically sought to assimilate and displace Native people and eradicate Native cultures. Today, we recognize Indigenous peoples’ resilience and strength as well as the immeasurable positive impact that they have made on every aspect of American society.

The president also issued a separate proclamation for Columbus Day, casting it as a holiday of importance to “Italian Americans,” but adding that it marked “the painful history of wrongs and atrocities that many European explorers inflicted on Tribal Nations and Indigenous communities.” 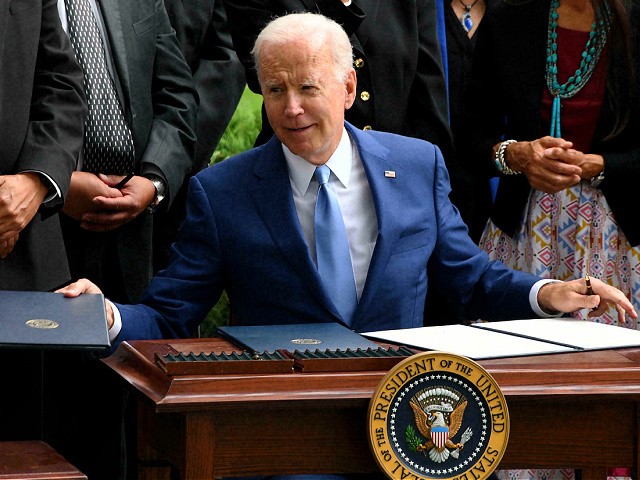 US President Joe Biden looks on after signing three proclamations on the North Lawn of the White House on October 8, 2021 in Washington, DC. (Photo by OLIVIER DOULIERY/AFP via Getty Images)

As Breitbart News’ Frances Martel observed, Columbus himself was indirectly responsible for the creation of the doctrine of human rights, through the extension of Christianity to the New World:

In the past few decades, the holiday has been sabotaged by leftist movements seeking to turn Christopher Columbus into the sacrificial lamb of European America, calling for statues of the man to be taken down and the second Monday in October to be renamed “Indigenous Peoples’ Day.”

While Columbus was the first European with the courage to venture west enough to find this hemisphere — hence becoming a lightning rod for anti-white sentiment — he was no successful conquistador, and his adventure is largely responsible for America (and greater Latin America) being a heavily Christian land. The discovery of the Americas by the Spanish empire, and not the English, also led directly to the formation of what is now modern human rights theory, and it was a Spaniard who applied the budding human rights concepts in Catholic doctrine to Native Americans for the first time.

It is important to note that the abuses for which the Spanish would one day be famous for on mainland North America — the attempts to convert Native monarchs like Atahualpa and Montezuma — occurred long after Columbus had authority in the eyes of Spain.

Biden also observed Indigenous Peoples’ Day on the campaign trail in 2020, and completely ignored Columbus Day, issuing a statement declaring, “Our nation has never lived up to our full promise of equality for all — especially not when it comes to the rights of the indigenous people who were here long before ships arrived from Europe.”

Last year, many Democrats, including Speaker of the House Nancy Pelosi (D-CA) condoned the destruction of a statue of Christopher Columbus in Baltimore, Maryland, by a mob of Black Lives Matter (BLM) protesters. 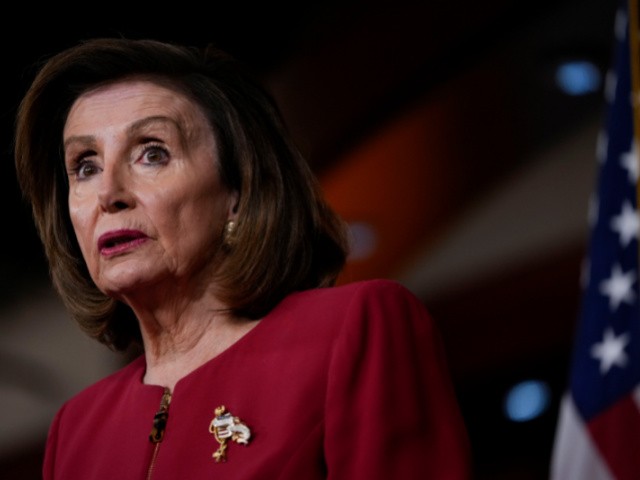 Speaker of the House Nancy Pelosi (D-CA) speaks during her weekly news conference at the U.S. Capitol on September 8, 2021 in Washington, DC. (Photo by Drew Angerer/Getty Images)

Popovich, a frequent Trump critic, has a history of controversial statements.

In March, he ripped Texas Gov. Greg Abbott for lifting the state’s mask mandate, vowing his team would continue to mask up.

“As far as the players go, we listen to the NBA, not the governor,” he told reporters.

In January, he praised the effort of House Democrats to impeach Trump for a second time, calling it a “good move,” and “the least we can do” to destroy Trump.

In August of last year, he heaped praise upon Austin, Texas, after it voted to defund the police, adding that he hoped San Antonio would follow.

As mobs rioted in dozens of American cities in the aftermath of George Floyd’s death last year, Popovich lambasted then-President Trump, calling him a “deranged idiot,” while insisting that the rioting is concurrent with a “lack of leadership” in the White House.

An active supporter of the BLM movement, he also said that Hispanics have also been the victims of systemic racism.

Protestors stand as mattresses are set on fire in front of the North Precinct Police building in Portland, Oregon on September 6, 2020. (Photo by ALLISON DINNER/AFP via Getty Images)

In March last year, the outspoken coach attacked then-President Trump over the U.S. response to the coronavirus pandemic, accusing him of being a “coward” because of his COVID policies, yet found himself unable to criticize China for its crackdown on the pro-democracy movement in Hong Kong or its long record of human rights abuses.

In 2019, he stated that former NFL quarterback Colin Kaepernick “was very courageous” for starting the NFL anthem-kneeling movement. He also called his protest of the anthem “a very patriotic thing.”

In 2017, in response to then-President Trump denouncing national anthem protests, he called the U.S. “an embarrassment,” adding that white people are privileged and “especially” need to be made “uncomfortable” for any change to be made.