Crowds are increasingly expressing their disapproval of President Joe Biden, not only in the U.S. but across the globe as demonstrators shout “fuck Joe Biden!” from American college football games to protests in Rome.

During an anti-coronavirus mandate protest in Italy, protesters reportedly shouted “fuck Joe Biden” as they passed the American Embassy in Rome Saturday:

🇹🇺🇲 Protesters in Rome chant "Fuck Joe Biden" as they march past the American Embassy 😅👊 pic.twitter.com/mxAkastFtW

The phenomenon has swept the United States. One of the most recent scenes occurred last week during Biden’s arrival to Howell, Michigan, where Trump supporters held signs reading, “Fuck Biden,” “Biden is a Traitor,” and “China Joe Must Go!” 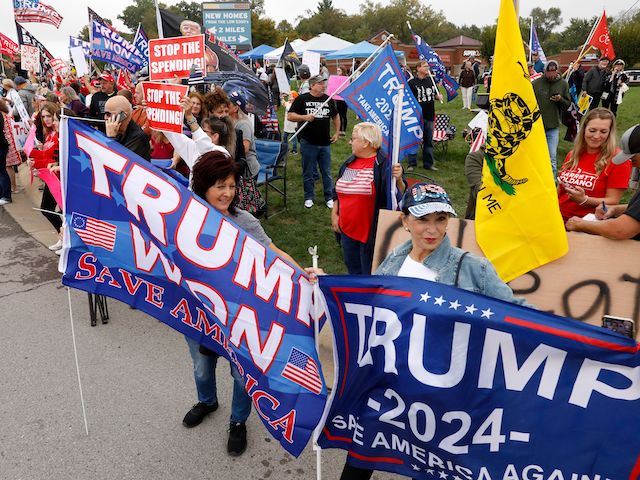 Demonstrators protest the visit of US President Joe Biden to Howell, Michigan, on October 5, 2021. (Jeff Kowalsky/AFP via Getty Images)

All the while, the phrase has been erupting at college football games week after week:

Another FUCK JOE BIDEN 🗣 chant, this time at the Virginia Tech game

Earlier this month, NASCAR fans also engaged, breaking out into the chant during NASCAR’s Xfinity Series at the Talladega speedway. However, the NBC reporter on site bizarrely asserted fans were shouting “Let’s Go Brandon.” Video shows that is clearly not the case: