Former Gov. Terry McAuliffe (D), who persistently denies Critical Race Theory (CRT) exists in schools, oversaw the Virginia Department of Education in 2015 when it encouraged using CRT, according to a slideshow that surfaced this week.

The presentation is dated September, 22, 2015, and was published by the Education Department under McAuliffe, who is now running for governor again.

A third slide advises to “embrace Critical Race Theory” and “engage in race-conscious teaching and learning.”

This all began in 2015, when @TerryMcAuliffe was Virginia governor and initiated the first documented statewide Department of Education training program on "critical race theory." It's expanded through the Northam administration—and must be stopped.https://t.co/53HenbG65y

The new document showing that the state was implementing CRT under McAuliffe’s reign in Virginia comes as McAuliffe vehemently denies CRT is being taught in schools, despite a slew of recent evidence contradicting his position.

“Let’s just be clear. We don’t teach Critical Race Theory. This is a made up, this is a Trump-Betsy DeVos-Glenn Youngkin plan to divide people, and it really bothers me,” McAuliffe said Sunday on CNN, referring to his opponent, Republican gubernatorial candidate Glenn Youngkin.

In June, McAuliffe dismissed CRT as a “right-wing conspiracy” and called it “totally made up by Donald Trump and Glenn Youngkin.”

McAuliffe’s campaign did not respond to Breitbart News’s request for comment on the newly surfaced slideshow.

In response to McAuliffe repeatedly refusing to acknowledge CRT in schools, Youngkin’s campaign charged in a statement to Breitbart News on Thursday that McAuliffe wants to “keep parents out of the classroom so his special interest allies can force their radical political agenda into classrooms and tell children what to think instead of teaching them how to think.”

Youngkin, who has for months made education a focus of his campaign, began amplifying his messaging on the issue following the last gubernatorial debate, in which McAuliffe said, “I don’t think parents should be telling schools what they should teach.”

McAuliffe’s debate remark was met with mass backlash, and it prompted Youngkin to create a now-widely circulated campaign ad and launch a “Parents Matter” initiative, which involves the Virginia Republican hosting rallies across the state promoting his education policy, including his vow to ban CRT in schools. 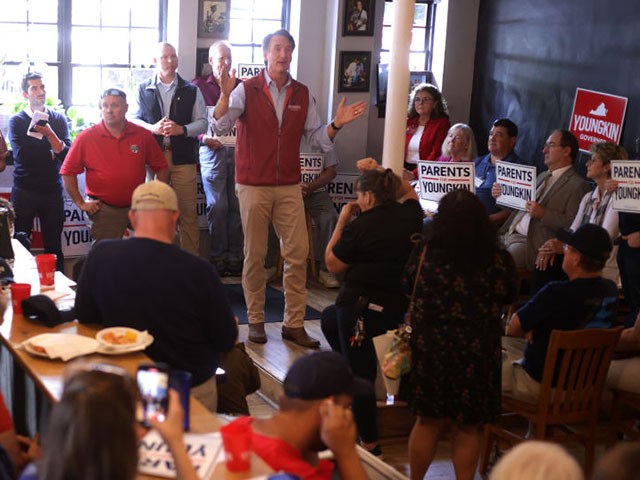 The gubernatorial contest in the blue-leaning state has become increasingly competitive between the two candidates in the final weeks of campaigning, and while most recent polls indicate McAuliffe has a slight edge, the latest poll, from the Trafalgar Group, showed Youngkin with a one-point lead.