President Joe Biden met with House Democrat leftists on Wednesday, pushing for a spending bill that would outlay $1.9 trillion, according to reports, down from his initial $3.5 trillion proposal.

The president wants to continue the child tax credit passed in his coronavirus rescue bill, but possibly for only one year to lower the final cost of the bill.

The president’s concessions demonstrate he is unable to meet his dream of pushing through major entitlement programs on the same level as former Democrat presidents Lyndon B. Johnson or Franklin D. Roosevelt. 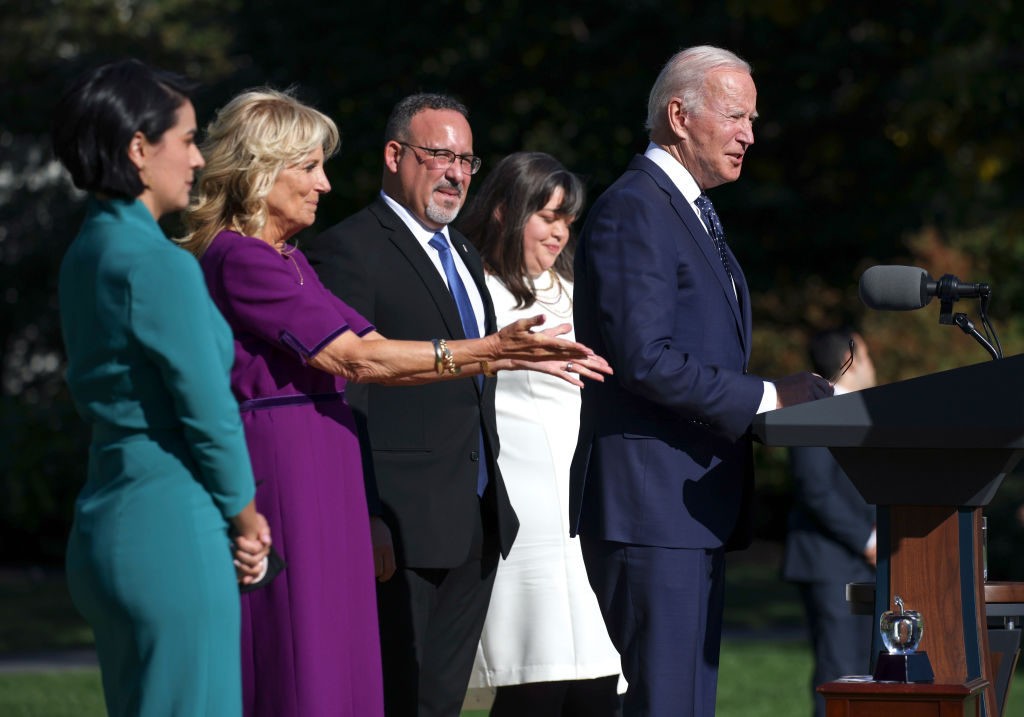 President Joe Biden delivers remarks at the 2021 and 2020 State and National Teachers of the Year awards ceremony at the White House on October 18, 2021 in Washington, DC. (Kevin Dietsch/Getty)

The president is now just trying to get a bill passed before he leaves for the G-20 meeting in Rome and the COP 26 climate summit in Glasgow, Scotland.

Biden’s attempt to deliver a widespread fundamental restructuring of the county’s economy is falling short of his initial $3.5 trillion request, but the nearly two trillion dollar bill contains a fundamental goal of taking money from the wealthy and redistributing to the poor and middle class.

Democrats are increasingly desperate to pass anything to show they can govern and deliver change for their voters.

The White House said Tuesday that Biden was “more confident” after holding “constructive” meetings with Democrat leftists and some Senate moderates.

Biden appears to have House progressives on board, a key voting block that has stalled passage on his bipartisan infrastructure bill until they get more social entitlement spending.

“I do feel like we’re getting closer. I think we’re all working really hard to try to get this done,” Congressional Progressive Caucus Chair Rep. Pramila Jayapal (D-WA) told Punchbowl News after meeting with Biden on Tuesday.

But instead of proving to leftists he can meet his promises to “Build Back Better,” especially on issues of climate change, Biden has to settle with a plan that only builds back a little better.

Biden needs all 50 Senate Democrats to join him to get his bill passed using budget reconciliation. Sen. Joe Manchin (D-WV) is still part of the conversation, even as he expressed doubts that a deal can be reached by the end of October.

The X-factor remains Sen. Kyrsten Sinema (D-AZ) who has not detailed what her parameters are for the bill in order to get her support.