A surgeon at a health clinic in Fergus Falls, Minnesota, was fired after speaking at a local school board meeting about parents’ rights to decide health protocols for their children, including whether to mask them. And now Minnesotans and scores of others beyond the state are rallying for Dr. Jeff Horak and freedom of speech.

Horak, who worked at Lake Region Healthcare for 15 plus years and has been practicing for six decades, made the remarks at a Fergus Falls school board emergency meeting to vote on a mask mandate. The meeting was on October 11 and he was notified that he had to resign or be fired on October 20.

“We live in America where freedoms are held close,” Horak said in a statement he released following his stepping down. “I am a man who believes individuals have the right to do their research and decide what’s best for them and their children when it comes to their health.”

“I don’t believe governments or institutions should dictate that,” Horak said. “It’s a position I’ve always taken. And when the science doesn’t make sense it’s hard for me to go along.”

A Fargo, North Dakota radio station reported on the development:

The board voted on a two-week mandate for elementary schools in the county, as a trial run to review the effects and [prevent] the spread of Covid 19. Despite the protests and statements from parents and faculty, the mandate was approved, but it expired on Wednesday, Oct. 20th.

“I’m used to wearing masks, I’m not trying to do it while I’m running, or playing in the gym or all that other stuff,” Horak said at the meeting. “These masks, you want to stop the virus.”

“The example of it is like trying to stop a mosquito with a chain-link fence, good luck,” Horak said. 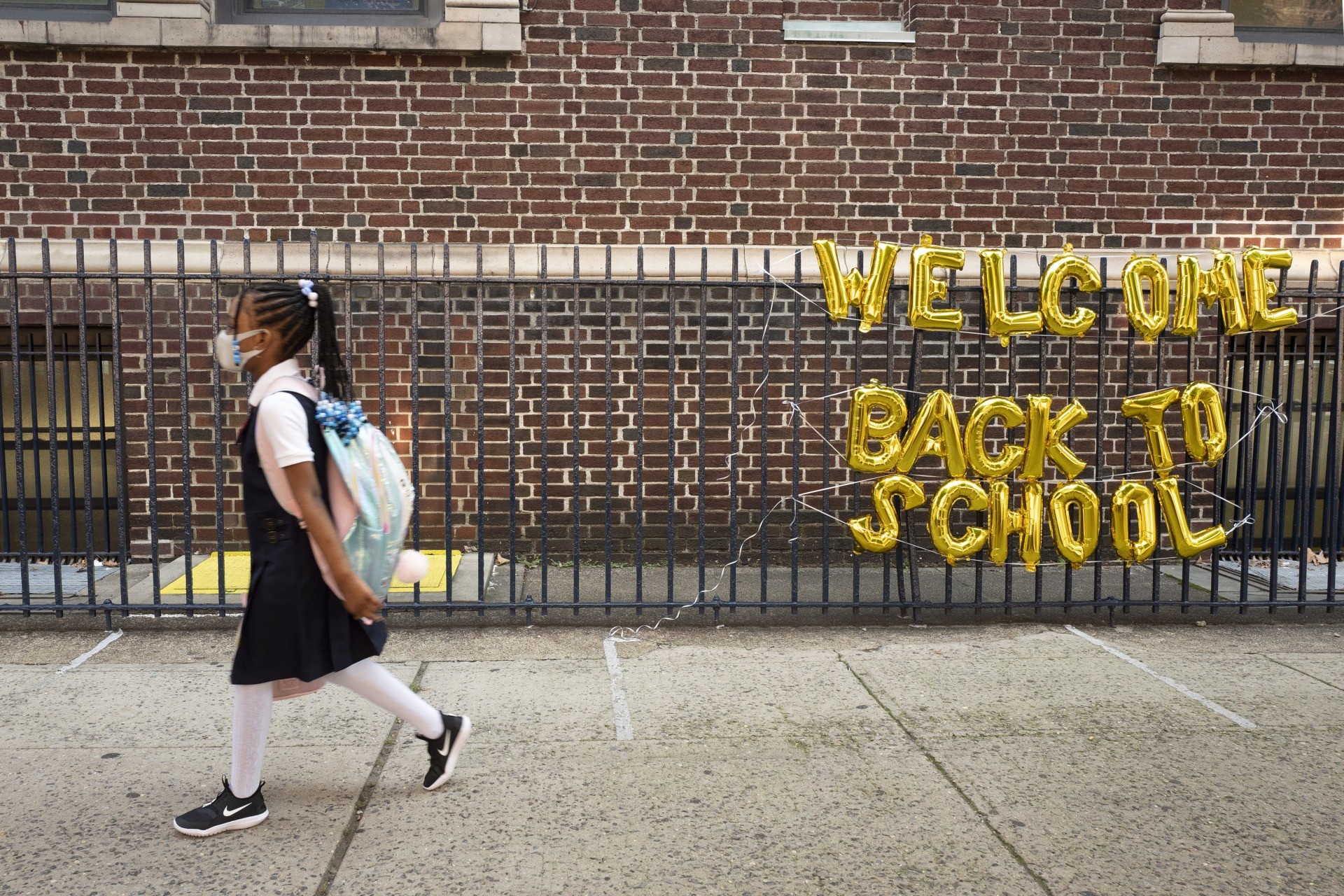 In this Sept. 13, 2021, file photo, a girl passes a “Welcome Back to School” sign as she arrives for the first day of class at Brooklyn’s PS 245 elementary school in New York. (AP Photo/Mark Lennihan)

The statement, or more like an open letter to the community and his former patients, said, in part:

The truth is, I don’t have any idea why I was fired. My contract states that they don’t have to tell me. I knew that when I signed it 15 years ago. So I have no idea…Was it because I didn’t always wear my mask at the hospital after the mandate for MN was lifted? Or because I stand for freedom of healthcare choice?

But what I do know is this is an amazing community. Debbie and I are so grateful for the support we’ve gotten – literally hundreds of texts, phone calls, and emails from our friends, colleagues, as well as my patients, whom I had the privilege to serve over these past 15 years.

It has been an honor to walk alongside you in your healthcare choices, some life-threatening, some simple surgical procedures, but also some of you who chose no surgery. I thank you for entrusting your care to me. I have been humbled to serve you. I feel blessed to live among you, work, and worship with you.

The Inforum website reported on Horak defending himself and the support he’s received since his job loss.

'I would not have done it differently’: Fired Fergus Falls surgeon does not regret speaking out on mask mandate in school https://t.co/7Mhl4p44Sz

“It’s been an emotional 48 hours for Dr. Jeff Horak,” the reports begins.

“Everybody has an opinion. I voiced my opinion — which is kind of, I guess, my right,” Horak said. “There is an amendment to the Constitution that says that,” he said. “I didn’t know what I had actually said until I watched the video, so no, I wouldn’t do it differently,” he said. “I would have done a lot of other things in the past differently, but those things have all brought me to this point.” he said.

News of the firing has created an uproar in the community, with the hashtag “I stand with Dr. Horak” gaining traction on social media. “Twitter or twiddle, or something, but I have a hashtag. It looks like a pound sign to me,” Horak said.

“(I) thank the the people who have trusted me, who have listened to me, who have guided me, and showed up. You won’t find a better place to live,” he said with his eyes brimming.