Huawei Chief Financial Officer and Chinese Communist Party (CCP) royalty Meng Wanzhou received a hero’s welcome when returning to company headquarters in Shenzhen, China, on Monday, a month after U.S. prosecutors made a deal to drop fraud and sanctions-evasion charges against her.

Meng’s deferred prosecution agreement essentially required her to admit the charges against her were true, and then she was allowed to walk away from committing fraud to subvert U.S. sanctions against Iran without paying any price whatsoever, aside from the almost three years she spent under very comfortable house arrest in Canada. 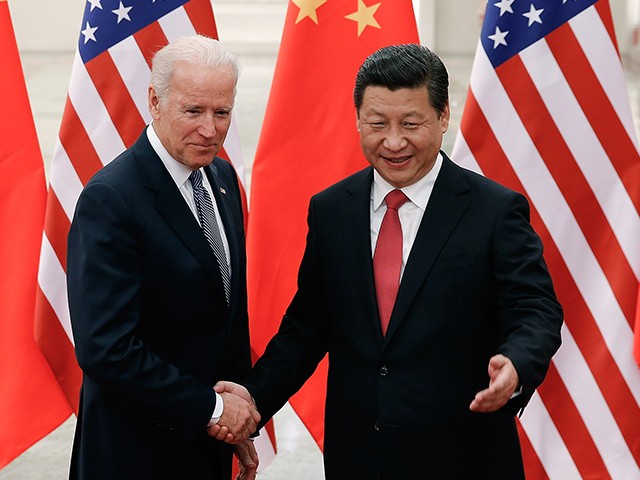 China’s state-run Global Times claimed that China sees Meng’s freedom as a huge victory over weak governments in the United States and Canada, and a throng of cheering employees celebrated Meng’s visit to her Huawei office after a mandatory three-week coronavirus quarantine as the return of a conquering hero.

After 21 days of quarantine, Huawei's Meng Wanzhou got a warm welcome from her colleagues when she returned to work in Shenzhen today.#Huawei #mengwanzhou pic.twitter.com/NNkqV6NM4a

Meng’s return was timed to coincide with the 77th birthday of her father Ren Zhengfei, Huawei’s founder. The Global Times reported Chinese social media was consumed with chatter about the CFO’s triumphant homecoming:

Thanks to sustained efforts by the Chinese government and support from the Chinese public, Meng was freed from Canada on September 25. This once again shows the country’s steadfast position in defending the rights and interests of Chinese citizens in its diplomacy with the US and overall foreign diplomacy, Chinese officials and experts have said.

Chinese netizens also welcomed Meng’s return to work on Chinese social media on Monday, with related posts having been viewed nearly 50 million times on Sina Weibo, ranked among the most-viewed posts as of press time on Monday.

“There’s always the rainbow after the storm,” one netizen said, noting that Meng’s going back to work has lifted the spirits of Huawei staff amid the US-led crackdown on its technologies.

CNN described an “outburst of national pride” in China over Meng’s homecoming, noting that Meng gave a speech at her red-carpet welcome to Shenzhen in which she thanked the Communist Party and Xi Jinping for securing her release. 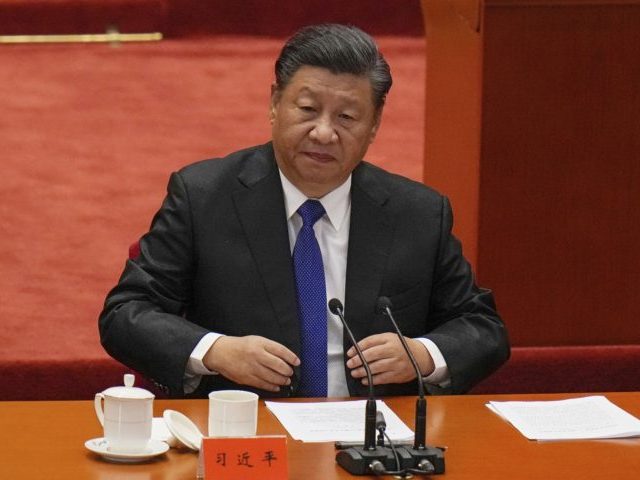 Chinese President Xi Jinping looks as he arrives at an event commemorating the 110th anniversary of Xinhai Revolution at the Great Hall of the People in Beijing, October 9, 2021. (AP Photo/Andy Wong)

“As an ordinary Chinese citizen who had suffered this plight and been stranded abroad for three years, there was never a moment where I did not feel the care and warmth of the Party, the motherland and the people,” she said.

“Chairman Xi cares about the safety of every Chinese citizen, and he also keeps my situation on his mind. I am deeply moved,” Meng declared.

“Where there is a Chinese flag, there is a beacon of faith. If faith has a color, it must be China red,” she said.

Chinese state commentators and social-media users denounced Meng’s detention in Canada as an act of “political persecution,” and hailed her release as a “major victory” and a “manifestation of China’s strength.” CNN noted that Chinese state media resolutely failed to mention that Meng admitted the charges against her were true as part of her agreement with prosecutors. 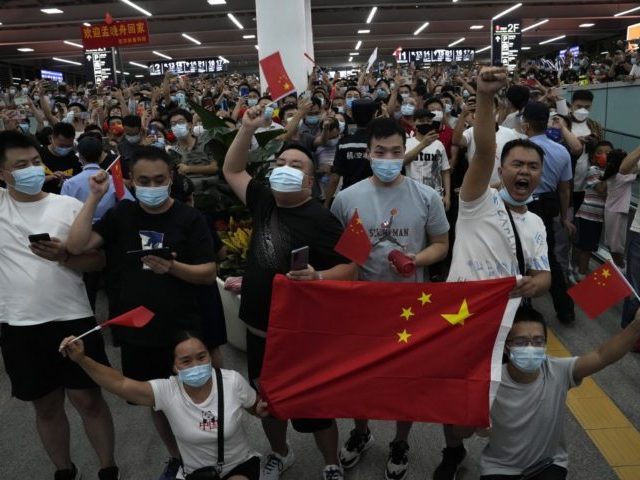 Residents holdings flags and chanting cheer as they wait for the arrival back to China of Meng Wanzhou, an executive of Chinese tech giant Huawei who was held by Canada for more than two years at America’s request, at the airport in Shenzhen in southern China’s Guangdong Province, on September 25, 2021. (AP Photo/Ng Han Guan)

Another Global Times editorial on Sunday set Huawei up as the plucky underdog in a battle against cruel U.S. sanctions, celebrating the company’s release of a smartphone operating system to compete with Google’s Android and Apple’s iOS as a great victory for resourceful and hard-working Chinese engineers over America’s attempts to throttle the company.

“I’m still cautious over whether the firm can still lead the future and win the battle with U.S. tech giants, but I can feel its story is now inspiring more firms in China to join the fight. Perhaps more foreign firms could follow suit to break the U.S. monopoly together,” Shen Weiduo wrote for the Global Times.