“The realities of things like… wage pressures… supply chain pressures… all these things are going to continue to contribute to this wage inflation that we’re seeing,” Scharf said to Yahoo Finance.

“That’s all very, very real… all these things will level out. Supply chains will get solved, I personally just think it’s going to be six-to-12 months,” Scharf added when talking about the supermarkets forecasting higher prices.

Nationwide supermarket chains, such as Albertsons last week, told analysts that they expect to see prices rise for food items and everyday goods due to the supply chain crisis, in addition to small businesses being forced to raise prices. A small business owner in Dallas said, “It’s a mess, and there’s no quick fix… Prices have definitely increased, and they seem to still be increasing.”

United Airlines is raising prices as well. Last week CEO Scott Kirby said, “Airfares are going to come back from the really, really low levels they got to during the pandemic.” 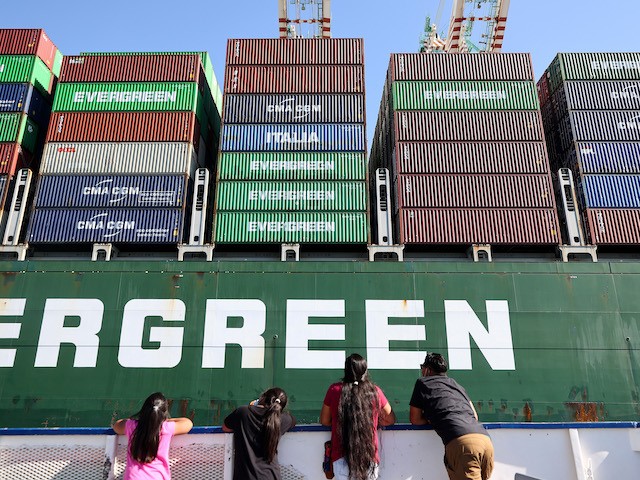 People ride on a tour boat beneath cargo containers stacked on a container ship at the Port of Los Angeles, the nation’s busiest container port, on October 15, 2021, in San Pedro, California.(Mario Tama/Getty Images)

The report said the administration “didn’t previously announce it, but Buttigieg’s office told West Wing Playbook that the secretary has actually been on paid leave since mid-August to spend time with his husband, Chasten, and their two newborn babies.”

Chief shipping analyst at a shipping trade group, Copenhagen-based BIMCO, previously told Yahoo Finance, “We expect… strained supply chains to last until the early parts of 2023. … We are basically seeing a global all-but-breakdown of the supply chains from end-to-end.”

“When inventory levels get lower, who’s going to get the shipment versus who’s not? Who’s able to spend? Who’s able to pay for the increase in wages?” Scharf explained. “It’s something that we’ve got to watch and continue to figure out how we help them.”