Youngkin spoke to an audience of hundreds packed into a ballroom here at the Westfields Marriott Washington Dulles in Northern Virginia just after 1:00 a.m., and shortly after several mainstream media outlets had called that he won the race.

The now future governor first thanked his wife, Suzanne, who had come out on stage ahead of him along with their children, and then thanked his supporters and his “beloved commonwealth of Virginia.”

This is a “defining moment,” Youngkin said, after he defied early expectations of a Democrat sweep in the blue-leaning state due in large part to Virginia’s overly energized suburban electorate. Overall turnout in the race was record-breaking; more than 3.2 million turned out, about half a million more than in 2017’s race. With 99 percent of precincts reporting as of this writing, Youngkin led McAuliffe by about two points.

“Together, we will change the trajectory of this commonwealth, and, friends, we are going to start that transformation on day one,” Youngkin announced.

Youngkin entered the race as an underdog but gained ground in the last couple months of campaigning as he capitalized on President Joe Biden’s dismal approval ratings and tapped into local issues inspiring voters like parents’ rights in education policy and lowering taxes.

“We’re going to restore excellence in our schools,” he said, referencing the issue of education policy that dominated the last month of the race. Youngkin listed out his education priorities, including expanding the education budget to invest in teachers’ pay, school facilities, and special education, and implementing an ambitious initiative to expand charter schools. 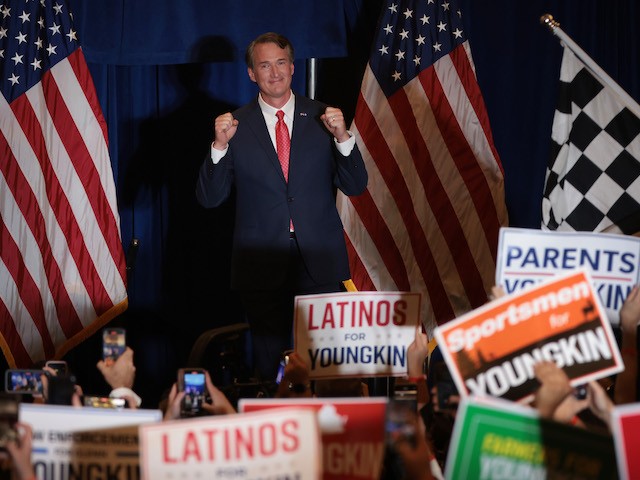 Youngkin continued, “We’re going to embrace our parents, not ignore them. We’re going to press forward with a curriculum that includes listening to parents’ input.” Youngkin was fueled in the final weeks of his campaign — as indicated by shifting polling — after McAuliffe was exposed in a debate for standing on the side of school administrators in the national fight between concerned parents and school boards.

Youngkin went on to list out his “day one” priorities that he has been highlighting for weeks on the campaign trail. His priorities include lowering taxes, specifically eliminating Virginia’s grocery tax, suspending the state’s most recent increase in the gas tax, and doubling Virginia’s standard deduction. Youngkin also promised to cut taxes on the retirement income of veterans.

In contrast to extremist calls to defund the police — which were soundly rejected Tuesday night in George Floyd’s Minneapolis via a vote against a ballot measure to replace the police department — Youngkin said, “We are going to keep our communities safe. We’re going to comprehensively fund law enforcement because they stand up for us, and we are going to stand up for them.”

Youngkin, who spent 25 years at the Carlyle Group and more than two years as its CEO, said of his jobs plan, “On day one, we’re going to jumpstart our jobs and reinvigorate this economy so it lifts up all Virginians. We’re going to get this economy moving again, growing 400,000 new jobs, fostering 10,000 start-up businesses. Friends, Virginia will be open for business.”

He continued, “It’s time for Virginia to be the place where everyone wants to live, not leave, a place where the relentless pursuit for a better life for prosperity is not burdened or blocked by self-interested politicians who are more focused on their futures than those they were elected to serve.”

Down the ballot, both the Republican candidates for lieutenant governor and attorney general, Winsome Sears and Jason Miyares, also won their races, and the House of Delegates was handed over to Republicans in a shocking flip. Youngkin concluded his remarks by describing Republicans’ overwhelming wins in Virginia as a “new day.” 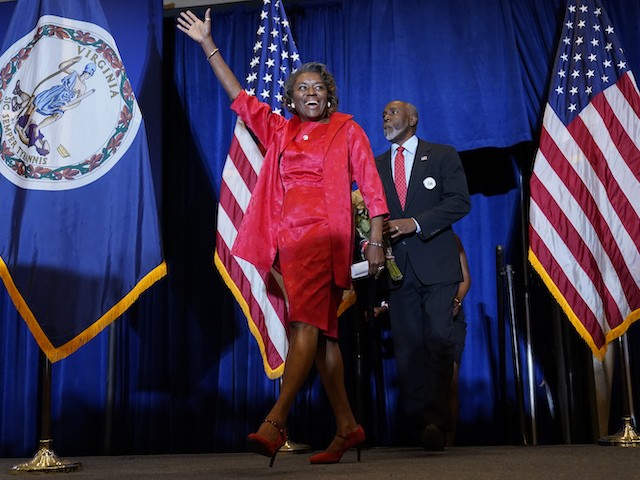 “We can build a new day, a new day for Virginians where, yes, we soar, and we never settle, a new day where all Virginians, all of us, can deserve to look forward to grabbing, to aspiring, to dreaming, and then achieving that great Virginia promise,” Youngkin said. “God bless you all, God bless the commonwealth of Virginia, and let’s go.”