“McAuliffe’s loss is a victory for all Americans. Why? Because it was a resounding rejection of efforts to divide us by race, the stripping of parental rights, and arrogant, deaf leaders. This benefits us all,” she tweeted on Wednesday.

McAuliffe’s loss is a victory for all Americans. Why? Because it was a resounding rejection of efforts to divide us by race, the stripping of parental rights, and arrogant, deaf leaders. This benefits us all.

Republican Glenn Youngkin coasted to a resounding victory to become Virginia’s next governor on Tuesday night, stunning election experts everywhere when he earned 50.9 percent of the vote with an 80,000-vote lead over McAuliffe.

Former Rep. Tulsi Gabbard (D-HI) has been in a heated battle with the Democratic Party’s establishment ever since she ran for president in 2020 when her more moderate approach to various issues reaped a whirlwind of hatred from the party’s hardcore leftist base. A feud even erupted between Gabbard and failed presidential candidate Hillary Clinton. The former first lady said that Russia was grooming a female Democrat candidate for a third-party run during an appearance on the podcast Campaign HQ. Though Clinton did not mention Gabbard by name, the implication was clear.

“I think they have got their eye on someone who is currently in the Democratic primary and are grooming her to be the third-party candidate. She is the favorite of the Russians,” Clinton said. “They have a bunch of sites and bots and other ways of supporting her so far.”

“That’s assuming Jill Stein will give it up, which she might not because she’s also a Russian asset. Yeah, she’s a Russian asset — I mean, totally,” Clinton continued. “They know they can’t win without a third-party candidate. So I don’t know who it’s going to be, but I will guarantee you they will have a vigorous third-party challenge in the key states that they most needed.” 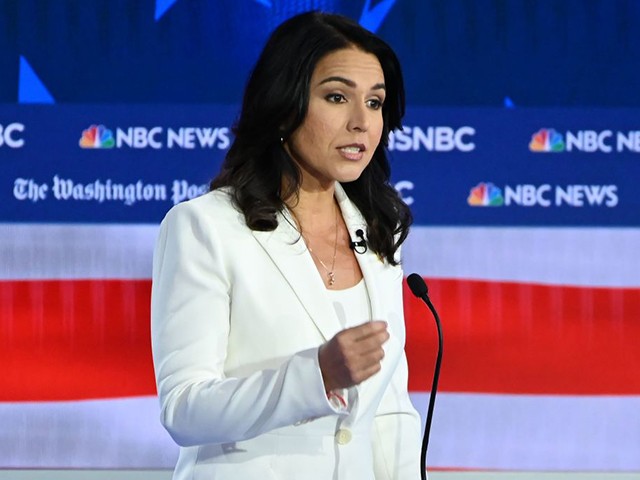 Democratic presidential hopeful Representative for Hawaii Tulsi Gabbard speaks during the fifth Democratic primary debate of the 2020 presidential campaign season co-hosted by MSNBC and The Washington Post at Tyler Perry Studios in Atlanta, Georgia on November 20, 2019. (Photo by SAUL LOEB/AFP via Getty Images)

Gabbard immediately took to Twitter to blast Clinton as “the queen of warmongers.”

“Great! Thank you [Hillary Clinton],” Gabbard said. “You, the queen of warmongers, embodiment of corruption, and personification of the rot that has sickened the Democratic Party for so long, have finally come out from behind the curtain.”

“From the day I announced my candidacy, there has been a concerted campaign to destroy my reputation. We wondered who was behind it and why,” she continued. “Now we know — it was always you, through your proxies and powerful allies in the corporate media and war machine, afraid of the threat I pose.”

“It’s clear that Democratic primary voters have chosen, Vice President Joe Biden, to be the person who will take on President Trump in the general election,” she said. “I’m confident that he will lead our country, guided by the spirit of aloha respect and compassion, and thus help heal the divisiveness that has been tearing our country apart.”

Fmr. Rep. Tulsi Gabbard: Biden admin is emboldening drug cartels and coyotes with our new open-border policy. This is a security and humanitarian crisis. And every day, the country loses faith in this government more and more. pic.twitter.com/wzf8hVejsB

Tulsi, however, changed her tune just last month when she told Jennine Pirro of Fox News that the Biden administration had been lying to the American people over the pandemic and the Afghanistan debacle.

“The faith and trust that the American people need to have in our leaders is dropping every day,” Gabbard said. “The Department of Homeland Security Secretary recently told Congress our borders are secure. This is what he said, this kind of bold-faced lie whether it has to do with domestic issues or foreign policy issues.”