Asked by a reporter at a press conference if he intends to investigate the sexual assault incidents reported in LCPS, Miyares responded immediately, “Yes.”

“We’re going to be seeking a legislative change,” he added, noting Governor-elect Glenn Youngkin (R) has already indicated he would sign into law a bill that “would essentially say if the chief law enforcement officer in a jurisdiction, either the chief of police or the sheriff, makes a request because the commonwealth’s attorney is not doing their job, then I’m going to do their job for them.” 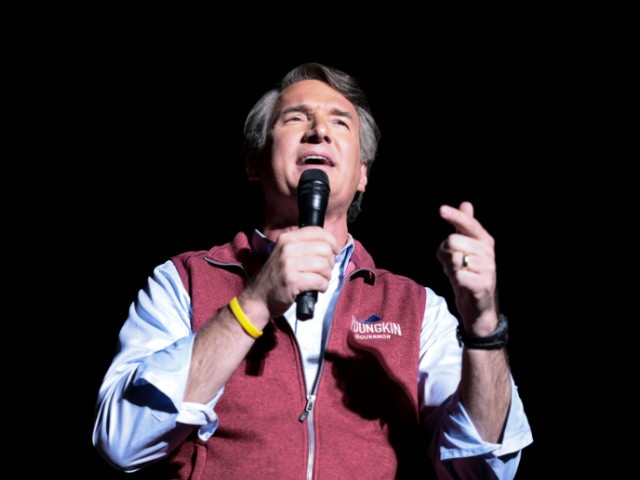 Glenn Youngkin speaks at a campaign rally at the Loudon County Fairground on November 1, 2021, in Leesburg, Virginia (Anna Moneymaker/Getty Images).

“And I’m thinking specifically of some of the so-called social justice commonwealth’s attorneys that have been elected, particularly in northern Virginia,” he asserted.

Miyares, joined by Loudoun County Sheriff Mike Chapman, said his office would have a “shift of focus” from that of outgoing Virginia Attorney General Mark Herring (D).

“Attorney General Herring was very vocal about the fact that he turned the office into a “progressive powerhouse” – those are his words, not mine – and I campaigned and went to the voters of Virginia asking them to hire me,” he said.

“I wanted to get it shifted back into more public safety and a law enforcement focus, precisely at a time when the murder rate’s the highest it’s been in over two decades in Virginia, and so that’s going to be a big focus for me,” Miyares added.

An investigation has been underway in Loudoun County since last week by the sheriff’s office after multiple reported incidents of a male student touching other students inappropriately at a district middle school.

LCSO is investigating multiple incidents that occurred at Harmony Middle School this week involving a male student touching other students inappropriately over their clothing. https://t.co/SI2rdaPEjm pic.twitter.com/WHBhUkxrIJ

News of the investigation came only two days after high school students in the scandal-ridden school district held a walkout in support of other sexual assault victims. The students left the school building chanting, “Loudoun County protects rapists.”

The walkout occurred one day after a Loudoun County judge found a boy guilty of sexually assaulting a 15-year-old girl in May. The boy was wearing a skirt and entered the girls’ bathroom at Stone Bridge High School.

Scott Smith, whose daughter was assaulted during the first incident, had been dragged out of a school board meeting and arrested on June 22 after hearing school officials supportive of transgender bathrooms deny there had been reports of sexual assaults in these spaces.

LCPS Superintendent Scott Ziegler also stated he was unaware of any assaults happening in the bathrooms.

However, as Breitbart News reported, Ziegler later acknowledged, following parents’ outrage, the school district has “failed” to provide safety for its students.