Lakers forward LeBron James has tested positive for the coronavirus, causing him to miss Tuesday night’s game against the Sacramento Kings.

James, reportedly asymptomatic, tested positive for the virus on Tuesday and immediately entered the NBA’s health and safety protocols. 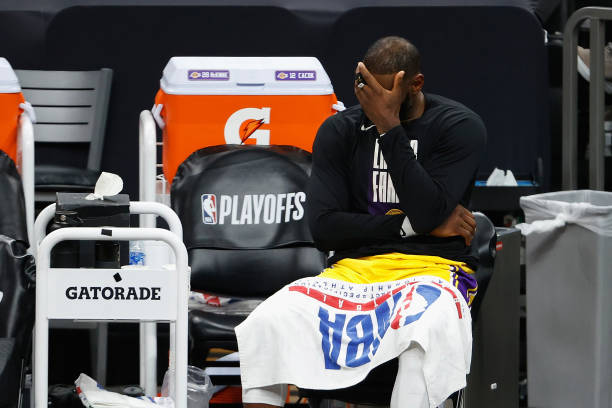 PHOENIX, ARIZONA – JUNE 01: LeBron James #23 of the Los Angeles Lakers reacts on the bench during the second half in Game Five of the Western Conference first-round playoff series at Phoenix Suns Arena on June 01, 2021 in Phoenix, Arizona. NOTE TO USER: User expressly acknowledges and agrees that, by downloading and or using this photograph, User is consenting to the terms and conditions of the Getty Images License Agreement. (Photo by Christian Petersen/Getty Images)

James is likely looking at a minimum of 10 days away from the Lakers unless he returns two negative PCR tests in a 24-hour span.

Being placed in the NBA’s virus protocols almost certainly means James, who said earlier this season that he is vaccinated, either tested positive for COVID-19 or had an inconclusive result.

The NBA, in a memo obtained by The Associated Press, also told its teams Tuesday that it has documented 34 cases in which a fully vaccinated player, coach or staffer had a breakthrough case of COVID-19. The league has said about 97% of players are fully vaccinated. Brooklyn’s Kyrie Irving, who has not played this season because of his status, is among the exceptions.

Should James miss the entire ten days mandated by the league for a positive test, he will miss at least four games.