A wave of migrants swarmed the southwest border from Arizona to Texas as the Biden administration prepares to restart former President Donald Trump’s Migrant Protection Protocol. The source, speaking on the condition of anonymity, says Border Patrol agents apprehended nearly 20,000 migrants since Friday. The source believes the migrants are rushing the border to avoid being subjected to the “Remain in Mexico” program for asylum seekers being implemented this week by Biden administration officials.

The “Remain in Mexico” program, officially dubbed the Migrant Protection Protocols kicked off on Monday as the result of a recent federal court order. The Biden administration negotiated with Mexico to allow the return of a yet undisclosed number of migrants under the program. The administration will begin the program in spite of its continued attempts to cancel it entirely.

#BREAKING I just talked with Yuma Co. Sheriff Wilmot who tells me they have seen at least 1000+ people cross the river into Yuma illegally a day the last two days. He says @CBP can’t process people quickly enough—The sheriff estimates more than 2,000 people are gathered there now pic.twitter.com/xZAZA1Aidj

The source says the surge is contributing to the overcrowding in facilities, exacerbating efforts to find suitable detention spaces for the migrants. Many of the migrants have yet to be entered into computer registry systems that record apprehensions. The source says nearly 15,000 migrants, the majority of whom are single adults, are currently being detained in Border Patrol stations and soft-sided processing facilities along the southwest border. 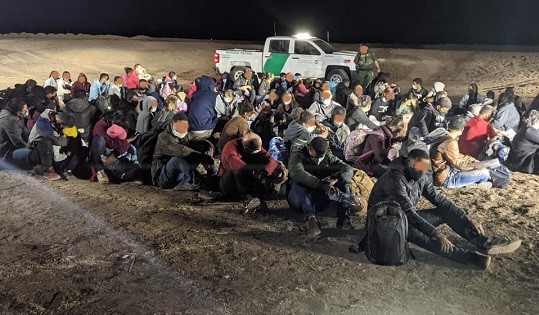 The border apprehension numbers cited above are “just what’s been entered into the system, we are holding several thousand more that we have not been able to enter into the computer systems to accurately track detention numbers” the source explained.

In Del Rio, Texas, an outdoor encampment under the international bridge near the city is being used almost daily to temporarily detain migrants until scant detention space and limited transportation resources become available to move the migrants.

Over 3,500 encountered since Friday!

Undocumented migrants continue to enter illegally throughout our area…and in large numbers! In one event, nearly 200 crossed together and were arrested in Eagle Pass this weekend. The numbers we have in custody continue to increase… pic.twitter.com/P20IJ4c5H9

That outdoor encampment was recently used to detain more than 15,000 mostly Haitian migrants. The source says the overcrowding at Border Patrol facilities is widespread and is occurring within almost all sectors.

According to the source, the Border Patrol in Yuma is currently detaining more than 2,500 migrants on official detention records. This figure does not include those migrants awaiting transportation at arrest locations.