Twice-failed presidential candidate Hillary Clinton is pulling her would-be 2016 presidential victory speech out of the archives as part of a “MasterClass lesson,” which is what TODAY described as “the power of resilience.”

In the full class, which will be released Thursday, Clinton focuses on the speech she would have delivered on November 8, 2016, had she defeated former President Donald Trump.

“In this lesson, I’m going to face one of my most public defeats head-on by sharing with you the speech I had hoped to deliver if I had won the 2016 election,” Clinton said, emphasizing she has “never shared this with anybody.”

According to TODAY, which received snippets of the speech, Clinton would have told the masses they “sent a message to the world” that “our values endure. Our democracy stands strong. And our motto remains: e pluribus unum. Out of many, one.”

Hillary Clinton reads parts of the victory speech she hoped to deliver in 2016https://t.co/hl6nLamdLo

“We will not be defined only by our differences. We will not be an us versus them country. The American dream is big enough for everyone. Through a long, hard campaign, we were challenged to choose between two very different visions for America,” her speech reads.

“How we grow together, how we live together, and how we face a world full of peril and promise together,” it continues.

“Fundamentally, this election challenged us to decide what it means to be an American in the 21st century. And for reaching for a unity, decency, and what President Lincoln called ‘the better angels of our nature.’ We met that challenge,'” her speech continues, highlighting her would-be status as the first elected female president in the United States:

Today with your children on your shoulders, your neighbors at your side, friends old and new standing as one, you renewed our democracy. And because of the honor you have given me, you have changed its face forever. I’ve met women who were born before women had the right to vote. They’ve been waiting a hundred years for tonight.

I’ve met little boys and girls who didn’t understand why a woman has never been president before. Now they know, and the world knows, that in America, every boy and every girl can grow up to be whatever they dream — even president of the United States.

This is a victory for all Americans. Men and women. Boys and girls. Because as our country has proven once again, when there are no ceilings, the sky’s the limit.

Notably, Clinton’s speech appears to focus on the theme of unity, despite her contentious, divisive campaign, where she coined the famed phrase “basket of deplorables” to describe Trump’s supporters. 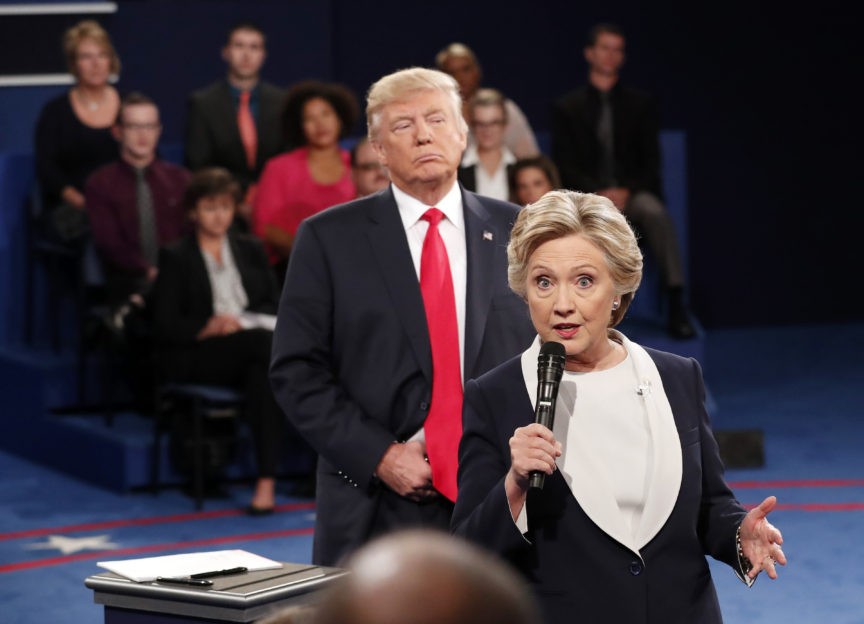 “If you dig deep enough through all the mud of politics, eventually you hit something hard and true,” the speech reads. “A foundation of fundamental values that unite us as Americans. You proved that today. “

“In a country divided by race and religion, class and culture, and often paralyzing partisanship, a broad coalition of Americans embraced a shared vision of a hopeful, inclusive, big-hearted America,” it continues, as Clinton would have spoken of an “America where women are respected and immigrants are welcomed. Where veterans are honored, parents are supported, and workers are paid fairly.”

“An America where we believe in science, where we look beyond people’s disabilities and see their possibilities, where marriage is a right and discrimination is wrong. No matter who you are, what you look like, where you come from, or who you love,” it continues.

Clinton has recently gone to bat for President Biden, whose approval ratings continue to sink, concluding last month that Americans do not “appreciate” Biden’s accomplishments in the country.

“Democracy is messy. People got kind of frustrated looking at the messy process of legislation. They didn’t really appreciate that within a year, the Biden administration has passed two major pieces of legislation through both the House and Senate,” she said during an appearance on MSNBC last month.

“They’ve passed another major piece through the House that will soon be in the Senate. By any measure, those are extraordinary accomplishments and they will help millions of Americans with health care and prescription drug prices, as well as climate change and so much else,” she continued,

“But because of the way we are getting our information today and lack of gatekeepers, and people who have a historic perspective who can help us understand what we are seeing, there is a real vulnerability in the electorate to the kind of demagoguery and disinformation that the other side is really good at exploiting,” Clinton added.