A visibly agitated Canadian Prime Minister Justin Trudeau on Monday night belittled members of the Freedom Convoy who have descended on the capital Ottawa in their thousands, claiming “A few people shouting and waving swastikas does not define who Canadians are.”

The left-wing Trudeau was addressing an emergency session of Parliament in Ottawa when he went on the attack against opponents of vaccine mandates, adding to previous sneers that characterized trucker protesters and supportive demonstrators as “conspiracy theorist” wearers of “tinfoil hats.”

“It has to stop,” Trudeau pleaded in the House of Commons on his return to parliament after isolating for a week due to a positive coronavirus test.

“This pandemic has sucked for all Canadians,” AFP reports Trudeau said, before claiming “Canadians know the way to get through it is continuing to listen to science, continuing to lean on each other.”

Trudeau pledged federal government support “with whatever resources the province and city need,” without elaborating what measures might be planned.

As he spoke it was clear that the protest convoy members have growing support across the country while maintaining they want to engage with the prime minister so he can address their concerns.

They are also sick of the manufactured hate that has been used to define them in the legacy media.

Even as the protest wound into its second week, it shows no sign of winding down.

A truck-convoy protest near the Ambassador Bridge, the busiest border crossing between Canada and the U.S., caused long traffic backups Sunday into Monday along the span from the Detroit side of the Detroit River.

And in Alaska, more than 100 truck drivers rallied in support of their counterparts in Canada by driving the 10 miles from Anchorage to Eagle River, the Anchorage Daily News outlined.

As Breitbart News reported, on the street in front of Parliament Hill were thousands of signs ranging from “no more mandates” and “freedom of choice” to “truck you Trudeau” as protesters gathered in peaceful groups to make their voices heard. 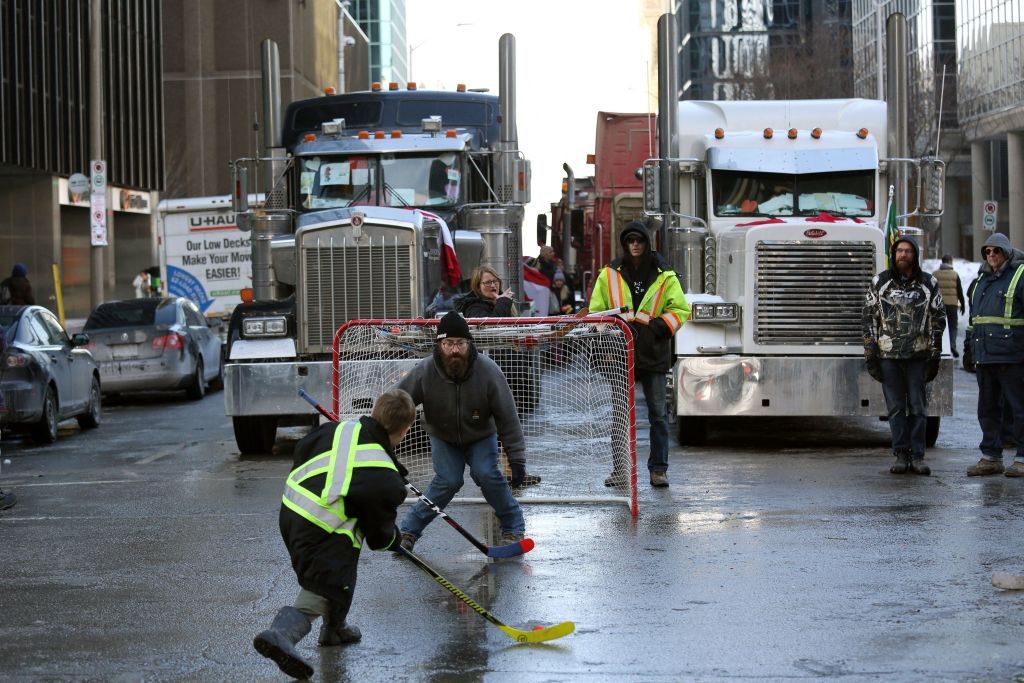 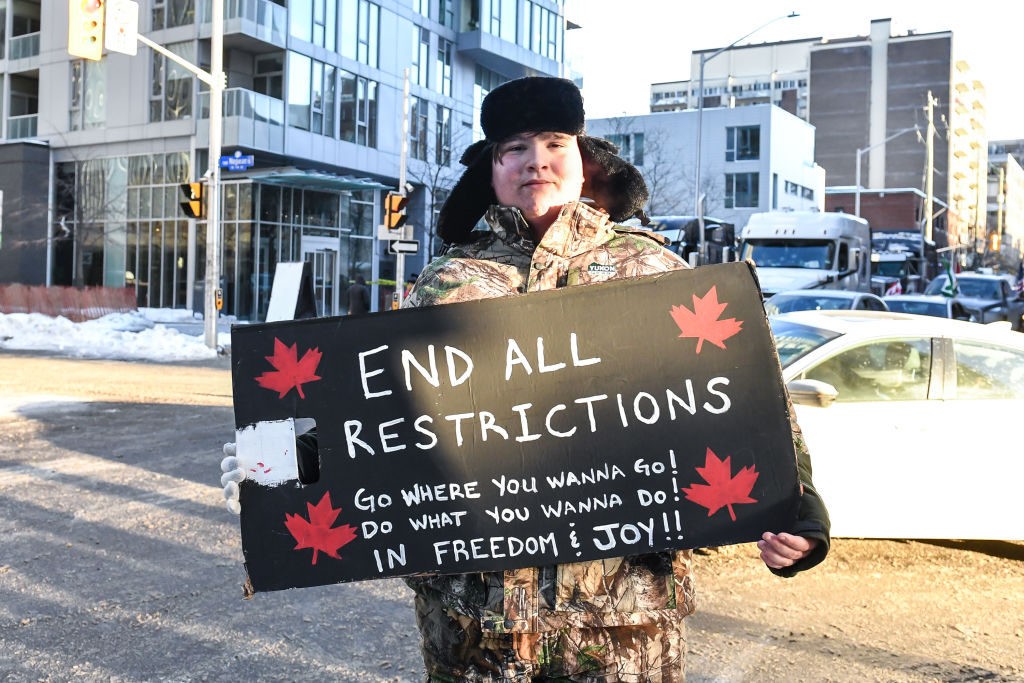 A protester holds up a sign demanding an end to all restrictions imposed by the Canadian Prime Minister Justin Trudeau in Ottawa, Canada. (Minas Panagiotakis/Getty Images) 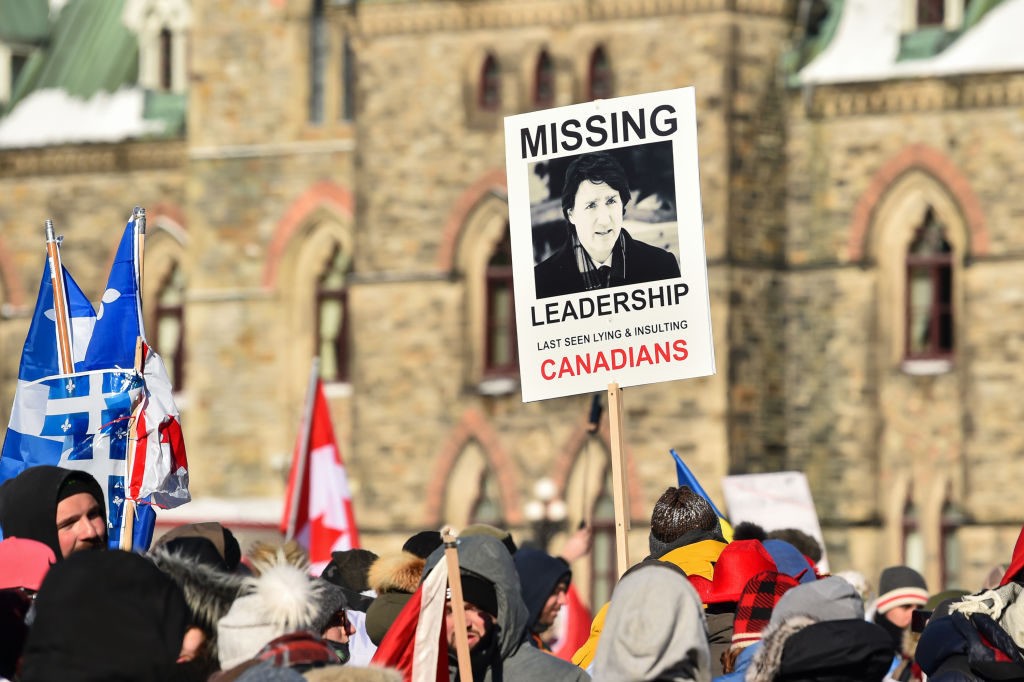 A poster condemning the mandates implemented by Canadian Prime Minister is seen on Parliament Hill on February 5, 2022 in Ottawa, Canada. (Minas Panagiotakis/Getty Images)

Trudeau has previously dismissed the protesters as a “fringe” group with racist backers, but he faces calls by the opposition Conservative party to extend an “olive branch” to them.

Some Conservative lawmakers, including one running to lead the party, have met and posted pictures with them.

Embattled Ottawa Police Chief Peter Sloly called the demonstration an “unprecedented protest never seen in Canada” and acknowledged that authorities failed to plan for it to last more than three days.

The Freedom Convoy demonstrations began January 9 in western Canada as protests by truckers angry with vaccine requirements when crossing the U.S.-Canadian border.

It has since spread across the country, into the U.S. and around the world.

Protest organizer Tamara Lich said activists were willing to engage with the government to find a way out of the crisis, but insisted that pandemic restrictions be eased. 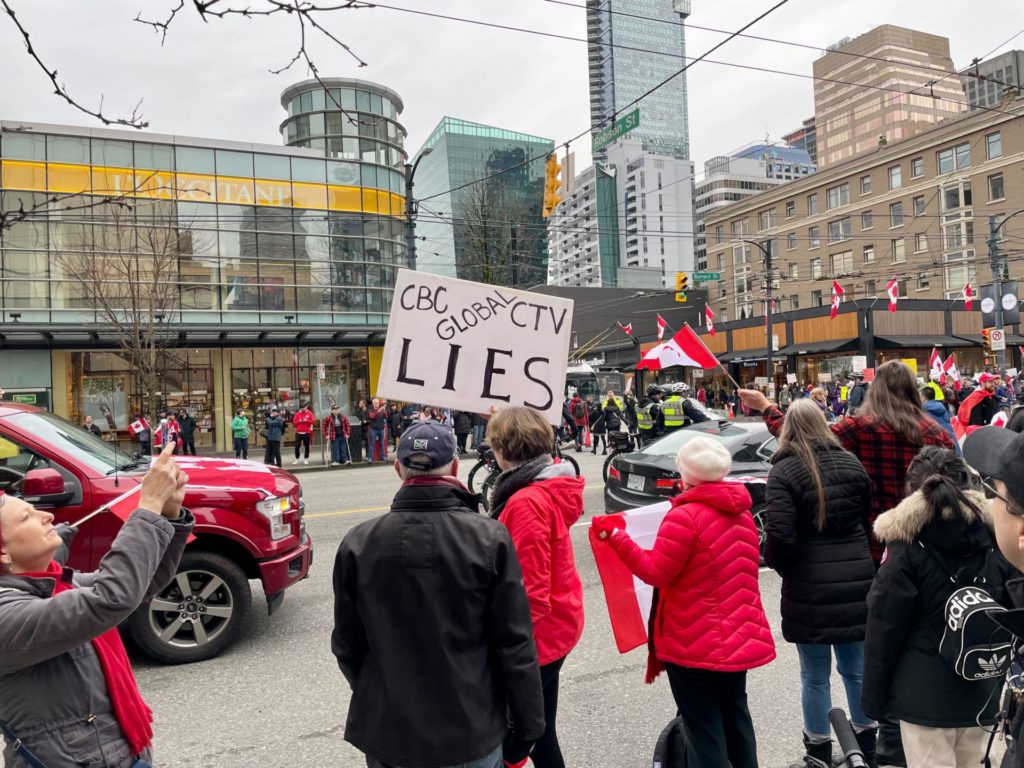 Time’s up: A message for the legacy media in Vancouver (Ethan Letkeman/Breitbart News)

“What we’re trying to do right now is reaching out to all of the federal parties so that we can arrange a sit down,” Lich said during a meeting streamed on YouTube as she added her voice to those disappointed in Trudeau’s response.

He previously denigrated Canadian citizens politically opposed to him, sneering at members of “anti-vaxxer mobs” who are “racist,” “misogynistic,” and “don’t believe in science.”