Much of Western media is currently riveted by concerns that Russia will launch a full-scale invasion of Ukraine triggered by Biden announcing that the United States would not intervene in the event of a “minor incursion.” Biden’s remarks occurred at a January press conference in which he said he believed Russian leader Vladimir Putin had already decided that he would launch such an invasion. Alarmed observers noted that the Russian military had stationed tens of thousands of troops in Russian and Belarusian territories surrounding Ukraine.

Zelensky attempted to calm the climate following Biden’s “minor incursion” remarks by noting that the number of Russian troops near Ukraine during the same time period in 2021 was not significantly different. He has also highlighted that, when he has attempted to alert the world of actual imminent threats to his country in the past, such as his revelation of an alleged coup plot against him in November, the world largely ignored him.

Zelensky and Putin has since engaged in two extended phone calls about the situation that have led to reports of personal conflict and mixed messages from the White House and the office of the Ukrainian president.

An unnamed senior Biden administration official confirmed on Wednesday that Harris would be attending the Munich Security Conference in that city this weekend and a sideline meeting with Zelensky was on her schedule.

Ukraine on Monday dismissed the Biden State Department's withdrawal of the families of U.S. embassy staff in Kyiv as "premature." https://t.co/6nyqLuyAi7

“Obviously, we’re focused mostly on the very serious threat to the country of Ukraine. But it goes beyond that. Russia poses a threat, in what it’s doing here, to the European and international order,” the administration official said. “And the Vice President will underscore that and make it clear.”

“One is that she’ll meet with President Zelenskyy of Ukraine,” the official continued, “And that’ll be a real opportunity to underscore our commitment to Ukraine’s sovereignty and territorial integrity, and to further coordinate the diplomatic efforts that have been underway to provide economic and defensive security assistance to Ukraine.”

Harris suddenly stopped meeting foreign leaders in early 2022 amid reports of a “reset” of her relationship with Biden.

Kamala Harris was accused of faking a French accent during her visit Tuesday to the Pasteur Institute in Paris. https://t.co/1r2PwAScrU

Biden’s personal relationship with Zelensky has also given indications that it could use its own “reset.” Zelensky has been expressing outrage and disbelief at Biden’s foreign policy since at least June, when the American president announced he would lift sanctions on the Nord Stream 2 project, a gas pipeline that would connect Germany to Russia directly, enriching the latter greatly and sidelining Ukraine’s natural gas market.

Zelensky told the Washington outlet Axios that he found out about the move from the media, not from any American government sources, and that he was “unpleasantly surprised” and “disappointed.”

The Ukraine leader also demanded to meet with Biden before the latter scheduled an in-person meeting with Putin, a demand Biden ignored.

Interactions since Biden’s “minor incursion” remark have not appeared less tense. The two had a phone conversation in late January that launched a barrage of rumors that Biden had ranted to Zelensky about the Russians “sacking” Kyiv, the national capital, and Zelensky had pleaded with Biden to “calm down.” The White House and the Ukrainian government denied the reports. Zelensky published photos of the discussion on social media that did not indicate he had enjoyed the conversation. 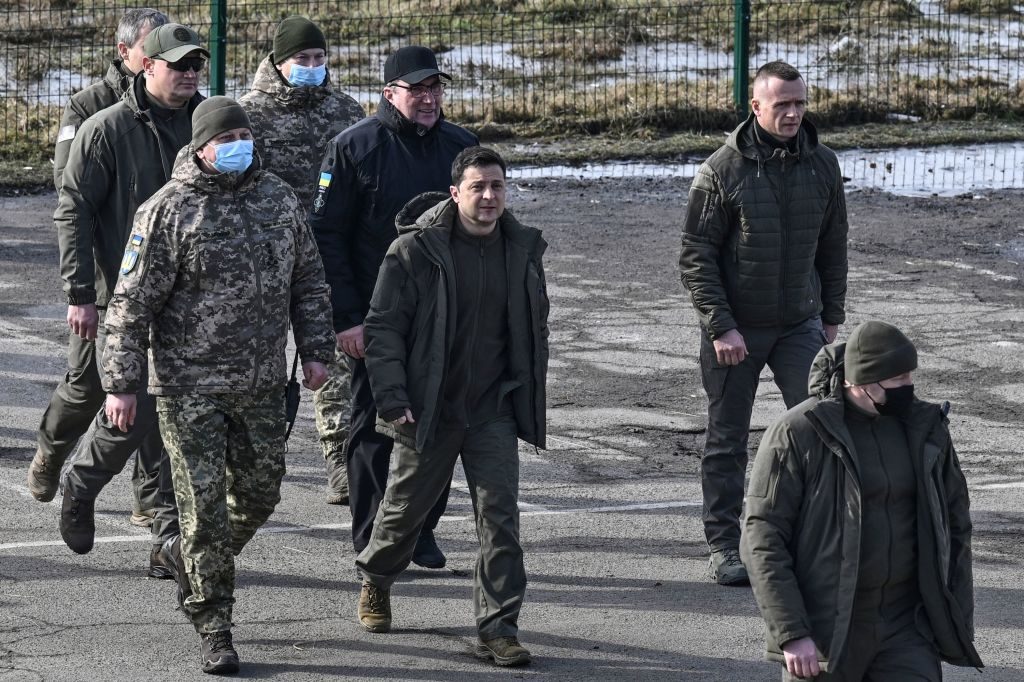 Zelensky later told reporters that Biden’s war hysteria had cost Ukraine hundreds of millions of dollars in foreign investment and lamented the lack of tact and diplomacy in discussing a potential extension of the war.

“I mentioned this to President Biden … we need to stabilize the economy of our country because of those signals which say that tomorrow there will be war,” Zelensky said, “because these signals were sent by even leaders of the respected countries, sometimes they are not even using diplomatic language! They are saying, ‘Tomorrow is the war.’”

Zelensky invited Biden to Kyiv during a call this weekend, according to his press office, to show the world that Kyiv was not on the verge of collapse. The White House readout of the call did not mention the invitation and Biden has, as of press time, ignored it.