Hawaii Democrat Rep. Kai Kahele has avoided voting in-person “due to the ongoing public health emergency” since January in Washington, DC while collecting his salary as a commercial pilot for Hawaiian Airlines, an international airline that lobbies Congress for legislation he has jurisdiction over.

Kahele — who previously attacked former Hawaii Democrat Rep. Tulsi Gabbard for “giving up” on her district when she ran for president in 2020 and promised to be different — has voted by proxy, meaning he gives his vote to other members of Congress to vote in his place, since January.

In fact, Kahele has only voted in-person in the House of Representatives five times this year, which all happened during a three-day period in January. The Honolulu Civil Beat reported that the other 120 votes that occurred were done by proxy, including “his” vote on April 2 to decriminalize marijuana which he later touted in a press release.

Civil Beat’s analysis of the congressman’s voting record revealed that he also skipped President Joe Biden’s State of the Union address in February. He was also reportedly the only member of the delegation that was absent when Hawaii city officials were at the capitol to talk about Honolulu’s $10 billion rail project with the Federal Transit Administration. And Civil Beat noted that he was a “no-show” during last week’s House Armed Services Committee hearing to talk about the Department of Defense’s budget request.

While the proxy voting rule is permitted, Kahele’s office would not answer if he was voted by proxy when he moonlighted for Hawaiian Airlines. 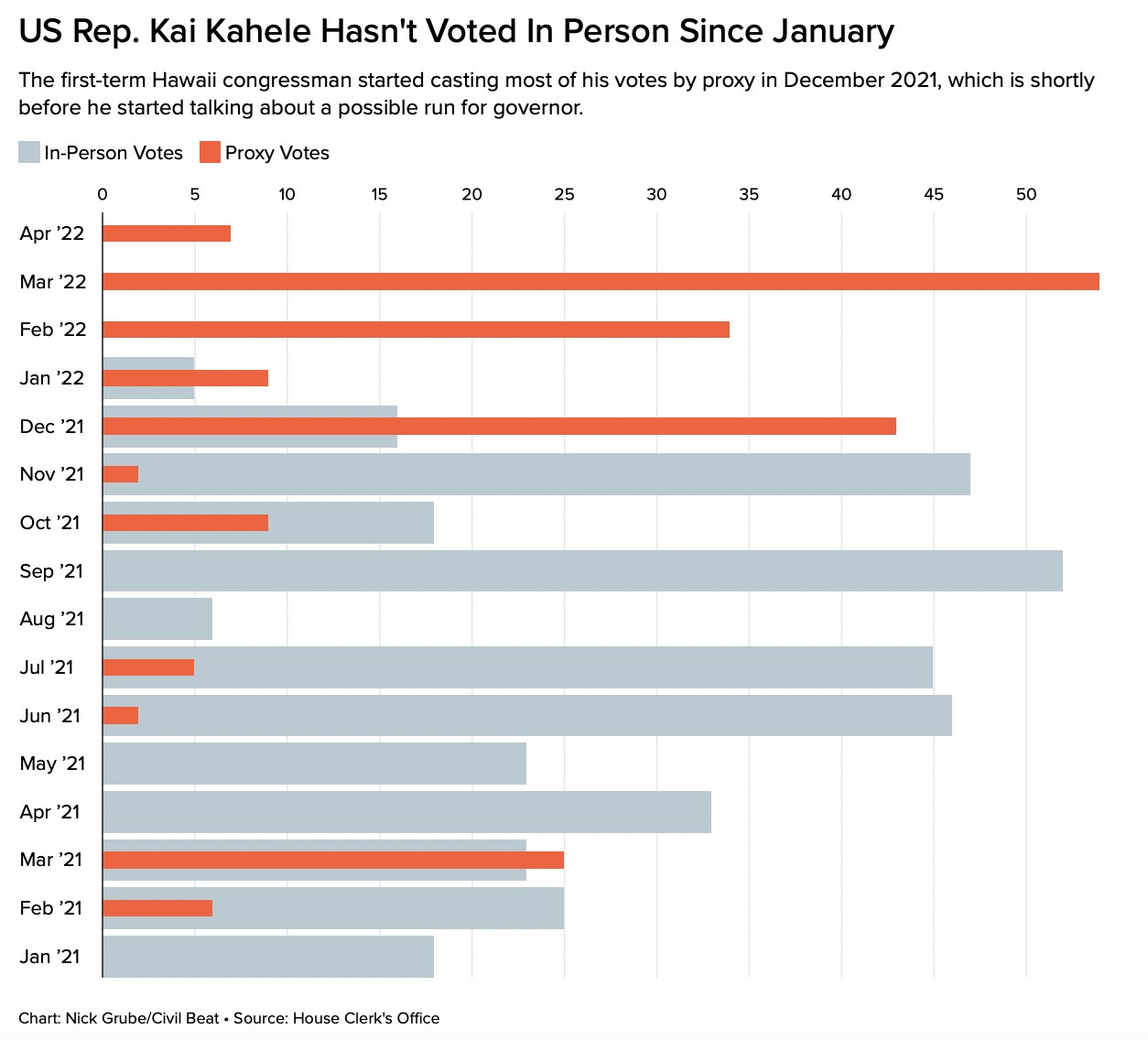 Screenshot from the Honolulu Civil Beat of Chart with Data from House Clerk’s Office.

However, before this year, Kahele has only proxy voted 49 times, as the majority of them were done in March of last year when Hawaii saw historic flooding.

Interestingly enough, his office “refused” to give Civil Beat a copy of the congressman’s schedule for the last four months to show how much time he has spent in the district or to show he has been in DC — despite his voting record — since his social media has shown him traveling around the various Hawaii islands. 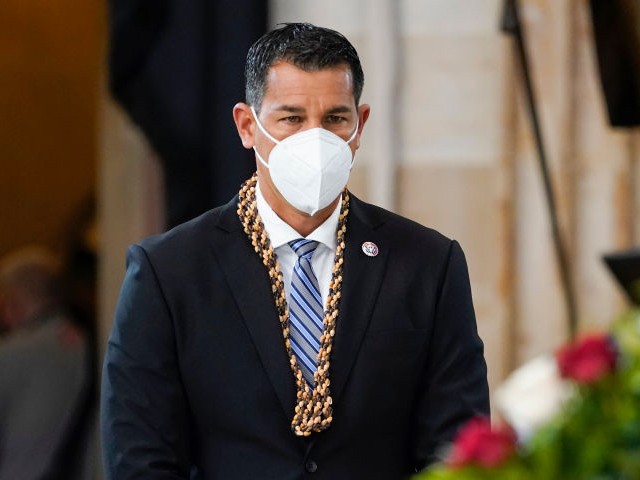 But, Kahele, who is paid an annual salary of $174,000 with taxpayer dollars as a member of Congress, is only allowed to make less than $29,595 in outside income like every other member of Congress and some senior staff. His office confirmed to Punchbowl that he is earning less than the allotted amount and that the House Ethics Committee approved some type of arrangement but could not produce documentation when asked.

Hawaiian Airlines, which Kahele works for, has lobbied for legislation with the Transportation and Infrastructure Committee, which the congressman is a part of. As Punchbowl noted, “this means that Kahele is collecting a salary from a company that is trying to lobby the federal government, and more specifically the committee on which he serves.”

In one instance, when the congressman showed up for work, he talked about Hawaiian Airlines during a congressional hearing by voicing frustration with the airline over the number of furloughs happening at the time.

I have decided to sit here through almost 3 hours of this hearing because I not only sit here representing the Second Congressional District in Hawaii, but I also sit here representing 810 Hawaiian Airlines employees who all received warning involuntary furlough notices just a few days ago, of which 647 flight attendants and their families and 99 pilots and their families both received those same involuntary notices. American Airlines will be issuing 13,000 involuntary furlough notices beginning tomorrow. And so this is something that I am deeply concerned about.

Kahele’s office told Punchbowl News that Ethics has “cleared” the arrangement to have the Hawaii Democrat “moonlight” as a Hawaiian Airlines pilot while he’s a member of Congress.

“They have not produced a shred of evidence that is the case,” Punchbowl News’s Jake Sherman wrote.

The House Ethics Committee has not commented on this situation:

FWIW: Kahele’s office says Ethics has cleared this arrangement — whereby he moonlights as a Hawaiian Airlines pilot while he’s a member of Congress that is intricately involved with overseeing the aviation industry. They have not produced a shred of evidence that is the case. https://t.co/KdmiO6gqgX

Kahele also has vast financial ties to Hawaiian Airlines in terms of his personal wealth and his campaign contributions. 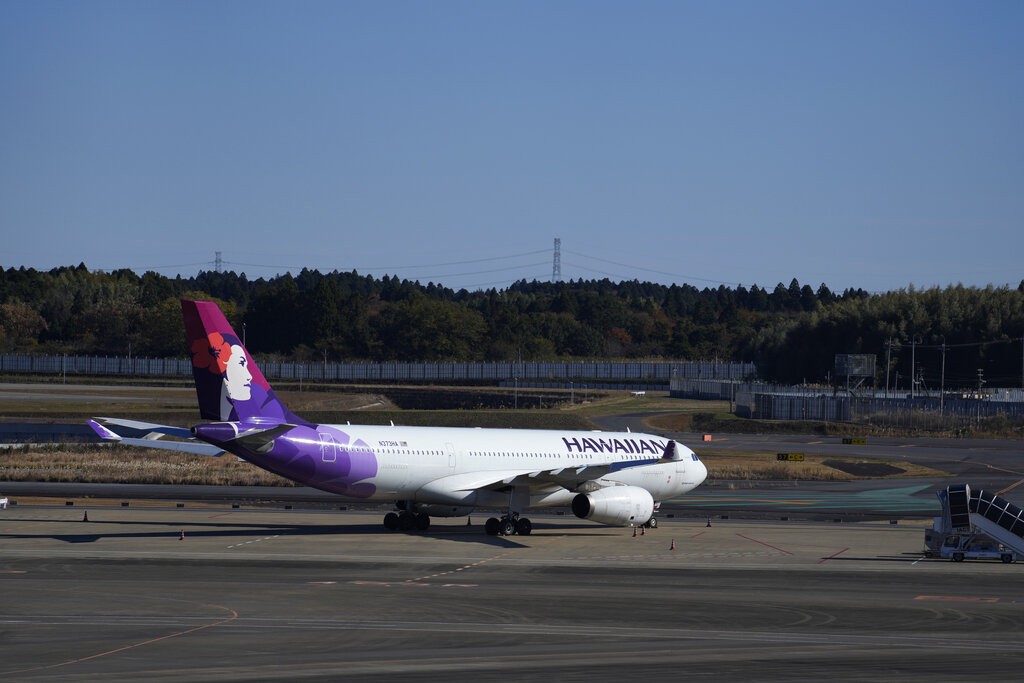 Many of Kahele’s top donors come from the airline industry.

Interestingly enough, he received in June 2021 a $2,500 donation from the Hawaiian Airlines Inc. PAC, the very company that he allegedly moonlights as a pilot while serving in Congress.

In total, Kahele has received $5,500 from the Hawaiian Airlines PAC.

Local and national pundits have noted the strange circumstances surrounding Kahele’s relationship with proxy voting, Hawaiian airlines, and his role in Congress.

John Hart, a professor of communications at Hawaii Pacific University, said, “It’s unusual to have someone gone this long with no explanation. I presume Democratic leadership would prefer for him to be there so I think it’s legitimate for the public to question why he’s not. For most of us if we don’t show up for work people ask why. If we don’t have a good reason then there are consequences.”

James Hohmann, a columnist for the Washington Post, wrote on Monday, “It’s time to end proxy voting in the House. This is ridiculous. Rep. Kai Kahele (D-Hawaii) hasn’t voted on any bills since January. Disengaged on approps. But he’s posting pictures of himself at marijuana dispensaries and still working as an airline pilot.”

Mike Berg, deputy communications director for the National Republican Congressional Committee, wrote, “Kahele can’t show up to Congress because of the ongoing pandemic. But can do the job that requires him to fly around in an enclosed plane with hundreds of people regularly?”

Kahele can’t show up to Congress because of the ongoing pandemic.

But can do the job that requires him to fly around in an enclosed plane with hundreds of people regularly? https://t.co/LswutZHqP5