Former President Donald Trump has watched the travails of President Joe Biden and former Secretary of State John Kerry trying – and failing – to ride a bicycle.

Seeing them both come to grief spurred Trump to make a solemn promise of his own to the people of America on Saturday.

As the video on this page illustrates, Trump wished Biden well and added he hoped he recovered from his fall near his vacation home in the U.S. state of Delaware. Trump added:

I hope [Biden] has recovered because as you know, he fell off his bicycle. No, I’m serious. I hope he’s okay. Fell off a bicycle. I make this pledge to you today – I will never, ever ride a bicycle.

Trump was speaking during one of his rallies on the America Freedom Tour after recently teasing a U.S. presidential bid in 2024.

As the oldest U.S. president, Biden’s health is the subject of constant attention, particularly as speculation rises on whether he will seek a second term in 2024.

In November 2020, shortly after his election but before taking office, Biden broke a foot while playing with his pet German shepherds. 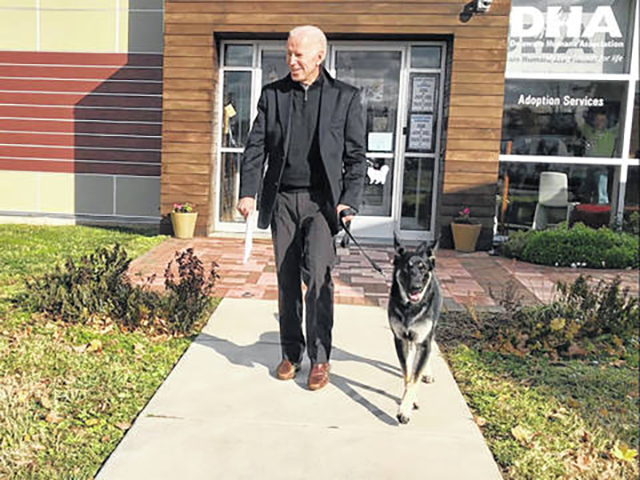 This Nov. 16, 2018 photo shows Joe Biden and his German shepherd Major in Wilmington, Del. The president-elect subsequently wore a walking boot for the next few weeks after breaking his right foot while playing with Major after exiting the shower. (Stephanie Carter/Delaware Humane Association via AP)

In 2015, then U.S. Secretary of State John Kerry had a mishap with a bicycle all of his own, as Breitbart News reported.

He broke his leg after falling over while cycling in Switzerland.

Kerry subsequently flew back to Boston for treatment where he vowed to pursue an “aggressive but responsible” recovery schedule.