Disgraced former Senator Al Franken (D-MN) is nothing if not consistent. A full five years since he resigned amid accusations of sexual misconduct, he used a guest-hosting spot on Jimmy Kimmel Live! to take pot shots at an old enemy in the form of Sen. Ted Cruz (R-TX).

A self-introduction led the way Tuesday night, with Franken telling his audience he saw himself as “the only former U.S. senator to guest-host Jimmy Kimmel Live!,” before insisting, “Tonight is not about politics, it’s about comedy and having fun.”

Then he immediately contradicted himself and waded into politics.

Franken ignored the fact President Joe Biden had just signed the Inflation Reduction Act into law. He also chose not to mention Rep. Liz Cheney (R-WY) who he had personally backed for reelection and was clearly losing the Wyoming primary to Trump-backed candidate Harriet Hageman.

Instead he turned his fond gaze on Cruz, saying:

I really think that one of the most serious issues facing our country today is just how big a dick Ted Cruz is.

The free character evaluation of Cruz did not stop there, nor the graphic allusion to the sum of his private parts.

Franken went on and warmed to his theme:

Now I’ve said it before, but I probably like Ted Cruz more than most of my colleagues like Ted Cruz, and I hate Ted Cruz […] Ted Cruz is probably one of the most famous senators, because as I mentioned, he’s a huge dick.

Watch the opening sequence for yourself below:

Franken did muse on the fate of Donald Trump, pointing out he is “under investigation for potential violations of the Espionage Act and obstruction” following the FBI raid on Mar-a-Lago.

“Now some are saying Trump could be a flight risk, which is crazy that the former president of the United States is a flight risk,” Franken added. “But the good news is that at least Donald Trump’s official presidential portrait is back up at every airport in the United States,” he said, as a photo of Trump with the words “No Fly List” above his head appeared on screen.

Al Franken served in the U.S. Senate from 2009-2018, when he resigned after being accused of inappropriate conduct by several women. 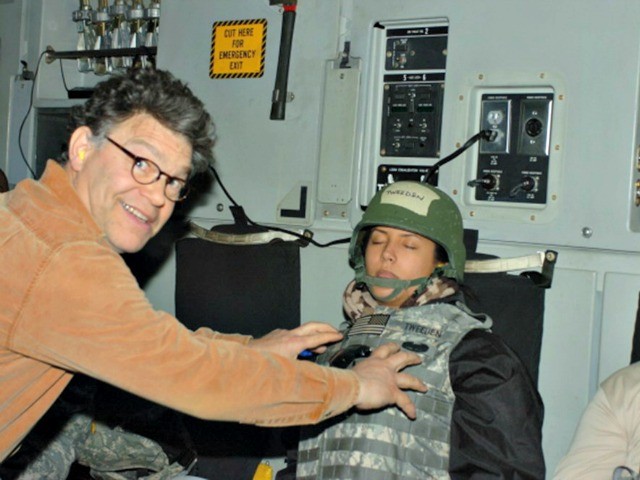 Sen. Franken’s numerous sexual assault scandals first broke when Leann Tweeden, a journalist who anchors at TalkRadio 790 KABC in Los Angeles, California, accused Sen. Franken of fondling her while she slept and shoving his tongue down her throat without her consent.

In his resignation speech, Franken claimed several of the women accusing him of sexual assault were lying. Franken said the accusations gave people the “false impression that I was admitting to doing things that I, in fact, haven’t done.”

Before his Senate career Franken was a best-selling author and sometime comedian.