According to a source within U.S. Customs and Border Protection, a recent email addressed to all CBP personnel from Commissioner Chris Magnus warns of potential violence directed at law enforcement due to the “false perception that the U.S. Government in not working to maintain security along the US-Mexico border.”

Breitbart Texas reviewed the email circulated to all Border Patrol Agents and CBP staff. Magnus further states the “false perception” that the federal government is not working to maintain security along the border is fueling the potential for domestic extremist violence. 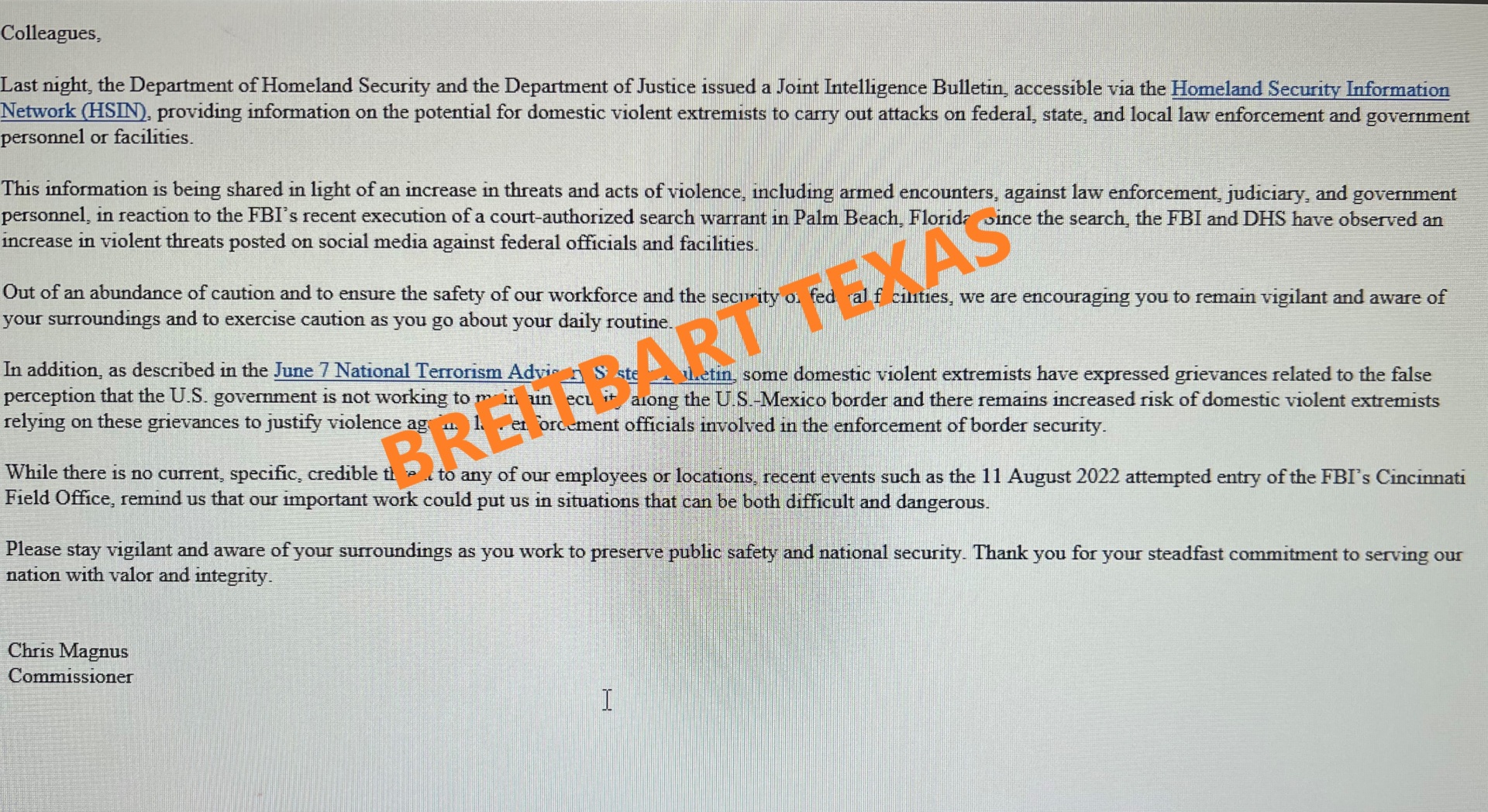 Some domestic violent extremists have expressed grievances related to their perception that the U.S. government is unwilling or unable to secure the U.S.-Mexico border and have called for violence to stem the flow of undocumented migrants to the United States. We assess that there is increased risk of domestic violent extremists using changes in border security-related policies and/or enforcement mechanisms to justify violence against individuals, such as minorities and law enforcement officials involved in the enforcement of border security.

The source within Customs and Border Protection, speaking on the condition of anonymity, says the message had a stinging effect on already sinking morale. They note that perceptions of lacking enforcement on the border are grounded in truth. The source complains about relatively few Border Patrol agents able to perform conventional duties.

The influx has stymied the agency’s ability to detect and record migrant got-aways according to the source, with nearly half a million eluding apprehension since October 2021.

The increase in migrant apprehensions is staggering. As of July, with two months remaining in the current fiscal year, Border Patrol agents apprehended more than 1.8 million migrants. In 2021, 1,659,206 migrants were arrested during the entire year. The current running total shatters the previous agency record along the southwest border.

As reported by Breitbart Texas on Sunday, nearly 700 migrants waded across the Rio Grande in one border city. Breitbart Texas posted at major migrant crossings and observed large and small migrant groups surrendering to Texas Army National Guard soldiers, Highway Patrol and Border Patrol around the town of Eagle Pass.

According to the source, on Sunday, more than 2,000 migrants were apprehended in the Del Rio Sector, mostly in Eagle Pass. They were usually released to pursue asylum claims.

The releases have frustrated mayors and city officials around the country who now face rising costs to accommodate arriving migrants. The City of San Antonio expressed similar concerns and attempted to reduce the daily influx. Local authorities issued threats to turn buses around to the border if left unsatisfied by the CBP.