David DePape, the man accused of attacking Paul Pelosi with a hammer, lived inside a school bus parked outside of his former lover’s home in the weeks leading up to the attack, according to his neighbors.

DePape’s neighbors said he slept back and forth between a broken-down camper van and a school bus parked outside pro-nudist activist Gypsy Taub’s home in Berkeley. According to DePape’s neighbors, Margarita and Julio Gonzalez, he used to live inside the house with Taub and her family before staying off and on in the buses parked outside.

In the driveway, there is a broken-down camper van. On the street is a yellow school bus, which neighbors said DePape occasionally stayed in. Both are filled with garbage typical of such structures in homeless encampments. pic.twitter.com/hmvYK8f1F6

DePape, who shares two children with Taub, was in a romantic relationship with the pro-nudist activist before she married someone else. DePape served as best man at Taub’s nude wedding, which ultimately led to Taub’s arrest for being naked in public. 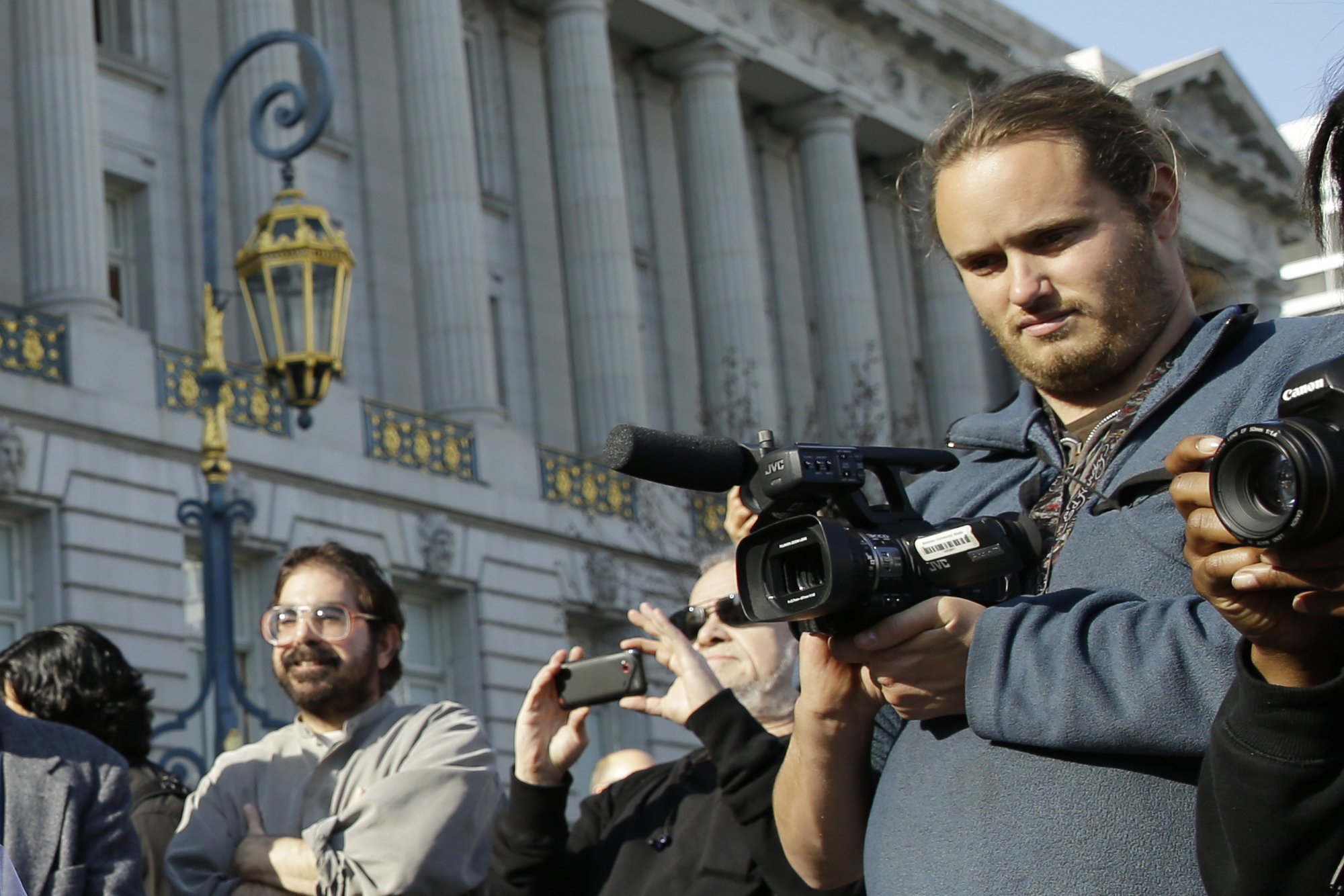 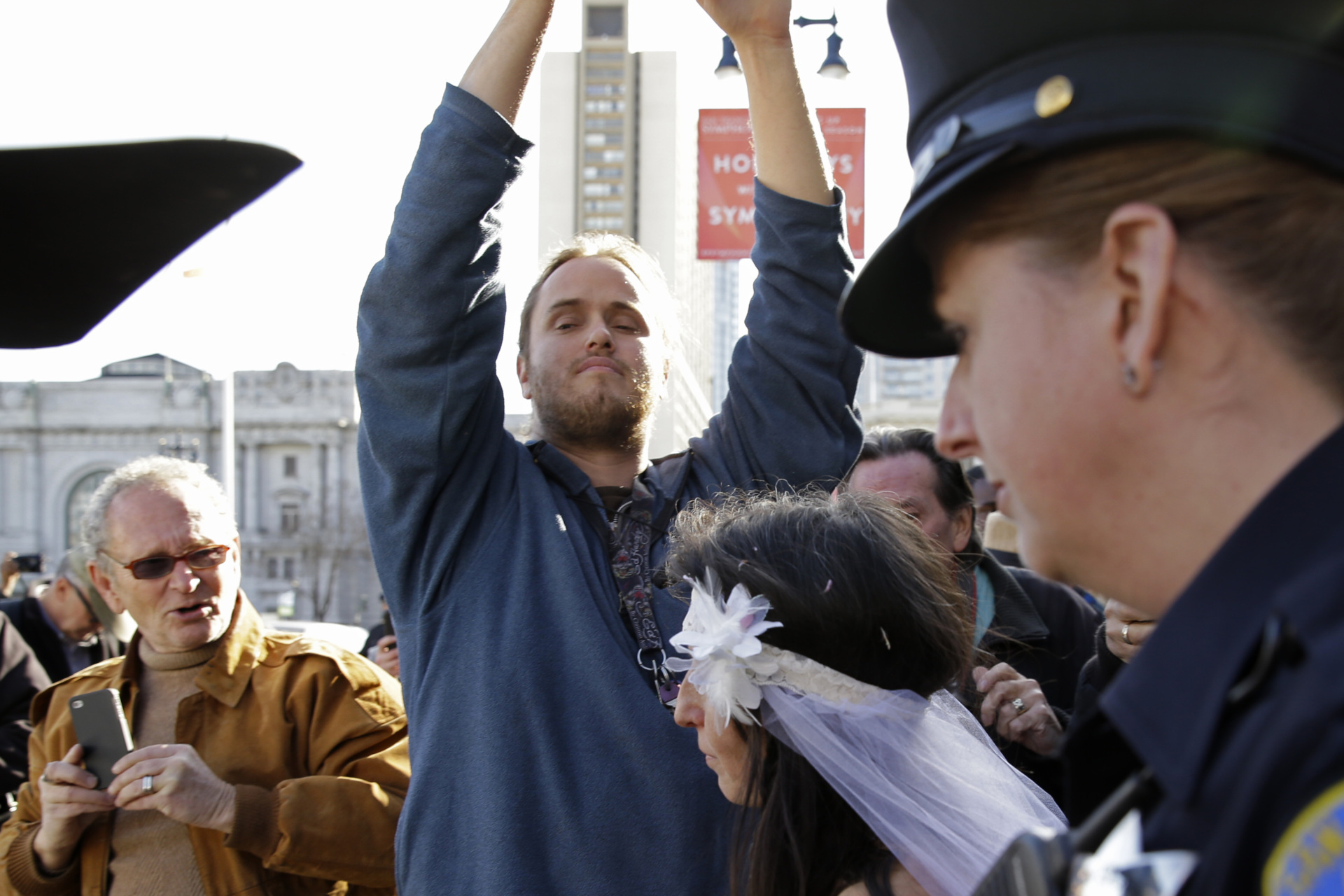 David DePape, center, records Gypsy Taub being led away by police after her nude wedding outside City Hall on Dec. 19, 2013, in San Francisco. DePape was known in Berkeley, Calif., as a pro-nudity activist who had picketed naked at protests against local ordinances requiring people to be clothed in public. (AP Photo/Eric Risberg)

According to DePape’s neighbor Ryan La Coste, “there was a huge fight” at the Taub-DePape compound one day after Taub’s wedding.

La Coste said he “wasn’t surprised at all” after learning that DePape was the man accused of breaking into Pelosi’s residence and attacking Paul Pelosi.

“I wasn’t surprised because another crazy story is coming from someone in that house,” La Coste said. “They are always toxic and always up to something. They are always on the news and trying to be ‘activists.’ They always want to be in the spotlight.”

A closer look at Taub’s residence and the busses DePape reportedly slept in revealed an affinity for left-leaning political causes, which stands in contrast to attempts to link the attacker to “MAGA extremists.”

For example, an American flag with rainbow colors and marijuana leaves can be seen in front of the house. Looking closer, a handwritten “Black Lives Matter” sign can be seen hanging in one of the home’s windows.

Further, another sign posted in a different window reads, “Berkeley Stands United Against Hate,” which refers to a Berkeley-based organization that aims to “stop the hate and implicit biases that are a dangerous threat to the safety and civility of our neighborhoods, towns and cities.”

A closer look at the van parked in Taub’s driveway showed more signs of support for left-leaning political causes.

And, as I discovered yesterday, DePape lived with a notorious local nudist in a Berkeley home, complete with a Black Lives Matter sign in the window and an LGBT rainbow flag, emblazoned with a marijuana symbol, hanging from a tree. pic.twitter.com/qxNvgWXSaG

One sticker on the van read, “Ain’t no sunshine until capitalisms gone.”

Another sticker had a sarcastic dictionary entry for the word “liberal,” which defined it as “One who is generous; one who favors greater freedom in political or religious matters; one free from prejudice or narrow thinking.”

The sticker said antonyms of “liberal” could be “stingy, mean, bigoted or conservative.”

The camper van also had an advertisement for a “natural addiction treatment” hanging over it, which according to reports, advertises the use of the psychedelic drug ibogaine that the DePape family brought back to the United States from Mexico.

Another neighbor told reporters that the DePape family are “very radical activists.”

“They seem very left. They are all about the Black Lives Matter movement. Gay pride. But they’re very detached from reality,” said one neighbor who identified as Trish. “They have called the cops on several of the neighbors, including us, claiming that we are plotting against them. It’s really weird to see that they are willing to be so aggressive toward somebody else who is also a lefty.”