“Christmas is essential to our understanding of Western Civilization and our values,” said Breitbart News’s Senior Editor-at-Large Rebecca Mansour on Sunday.

“The symbols and celebration of Christmas have shaped our history [and] Western Civilization,” said Mansour.

Reflecting on “the dawn of Christianity,” she noted Christianity’s “transformative” impact on the old pagan world and the culture of Germanic barbarian warrior tribes.

Chivalry — rooted in ethical monotheism — spread the concept of valuing all human life as having dignity, said Mansour:

Chivalry was introduced to Western feudalism [via Christianity]. It made feudalism actually livable and bearable. What chivalry called for, what the concept of chivalry was, it was about the defense of the weak. It said that the strong had to be champions of the right and the good against injustice and evil. That was the code of chivalry.

This only came about because of the Judeo-Christian West, and I say Judeo-Christian for a very specific reason; all of this is rooted in the ancient Jewish scripture, what the Christians would call the Old Testament. You can see it right from the beginning. The God of the Old Testament, the God of Jewish scripture instructs that every single human being has worth and dignity — even the foreigner, even somebody outside of your tribe, even the widow and the orphan. They all have worth and value — the weakest among you as well as the strong. This is a radical concept, and it is from the Jews that we have monotheism, and it is from that that Christianity evolved.

“The idea of protection of the weak and innocent,” said Mansour, entered Western culture via Judeo-Christian ethics, which radically “changed the way that we have looked at the rights of the weakest among us.”

Bannon agreed, noting that the “Rough Roman justice” of the old pagan world had “no sense of you as a person or an individual.”

Christianity’s spread to the Germanic lands on the frontiers of the Roman Empire, noted Mansour, set the stage for the evolution of conceptual human rights and created the foundation for the Western values we cherish today.

Mansour tied this to the symbols and celebration of Christmas by explaining that the “most iconic” and ancient Nativity image is the Madonna and Child.

The ubiquity of depictions of the Madonna and Child as “the highest expression of art” in European countries, said Mansour, vividly illustrates Christianity’s transformation of the “Viking-type” “warrior tribe” cultures that valued only the strong and worshipped war gods. People who once subscribed to an ethos of “might makes right” had transitioned to a civilization that elevated the image of a woman holding a child to preeminence in their artistic expressions.

Christian symbolism — particularly pertaining to the Christmas-themed image of the Madonna and Child — played an indispensable role in rallying Christian forces to victory against Islamic enemies in determinative battles, said Mansour. Pointing to the Battles of Vienna (1683) and Warsaw (1920) as examples, she noted the centrality of Christian symbolism to the war efforts of European nations in defending against Islamic and communist invasions, respectively.

In both battles, Mansour explained, Catholic Poland’s devotion to a depiction of the Madonna and Child known as the Black Madonna of Częstochowa served as a rallying point and source of consolation. It also served as a unifying symbol for Lech Walesa’s Solidarity Movement in their struggles against their communist rulers in the 1980s, she noted. Walesa famously wore a lapel pin bearing the image of Our Lady of Częstochowa.

Mansour and Bannon went into particular detail about the epic Battle Vienna in 1683. As Mansour explained, the Polish King Jan III Sobieski rallied his forces to liberate the besieged city of Vienna from the Islamic army of the Ottoman Turks by encouraging them to fight for “God and Our Lady” and to invoke the Madonna’s help in securing their victory and protecting their homeland, which he had entrusted to her care when he visited the shrine at Częstochowa before departing for battle.

The allied Christian forces, known as the Holy League, under Sobieski’s command knew that if Vienna fell, the Turks would then turn their sights on their ultimate goal which, Mansour explained, was “the greatest city in Christendom — Rome,” and “if Rome fell, Holy Mother Church would fall.” The Christian forces were fighting to preserve their faith, she said.

Sobieski himself led the cavalry charge to liberate Vienna — the largest cavalry charge in history — with 18,000 Polish and allied knights, including 3,000 of the famed “Wing Hussars.” The allied forces of the Holy League smashed the Turkish army and sent them scurrying over the Danube. The victorious Sobieski sent the Pope the Turkish army’s green Islamic banner along with a message paraphrasing the words of Julius Caesar: “Veni, vidi, Deus vicit.” (“I came, I saw, God conquered.”)

“The Christians had turned the tide against the sword of Islam” in the Battle of Vienna, said Mansour, quoting Ludwig Heinrich Dyck. The Turks would never again venture that far into Western Europe. 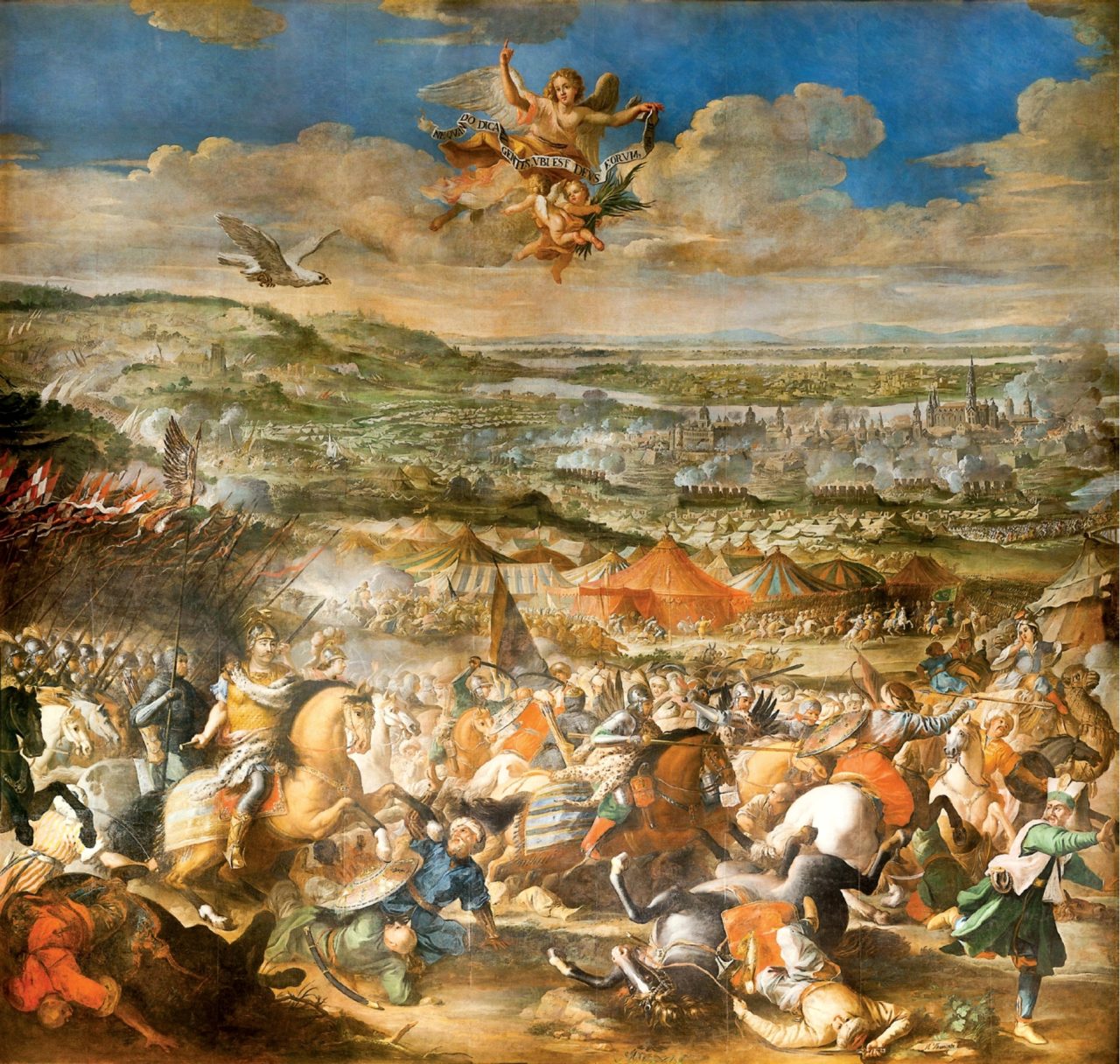 The Battle of Vienna, oil on canvas, circa 1688, by Martino Altomonte (Wikimedia Commons)

“It was on September 11, 1683 that the conquering armies of Islam were met, held, and thrown back at the gates of Vienna,” wrote the late Christopher Hitchens, describing the rationale behind the date selection of the 9/11 Islamic terrorist attacks on the United States in 2001.

“The radicalized Muslim world,” said Bannon, views the Battle of Vienna as a symbol of Christian victory that must be overcome. “It was one of the symbols of the September 11 bombing seventeen years ago, this Battle of Vienna.”

“We would all be in mosques today” if not for Christianity and Christmas as galvanizing forces among Western societies against hostile Islamic societies, said Bannon.

Although civilizational conflict between Western and Islamic societies has modified across space and time, it continues through the present day with certain commonalities. Bannon explained:

The Siege of Vienna we’re talking about, with the Ottoman Empire — which is Turkey, and the Muslims — this whole invasion of the West, occurring literally today with the same migrant issues coming up through Syria, through Turkey, and you see the countries of Poland, and Hungary, and the Czech Republic, and Slovakia taking the lead here in trying to reverse this.

“These fights haven’t really changed all that much. It’s still Iran and the West. It’s still Persia and the West,” said Bannon, noting the similar conflictual flash points between Western forces and ISIS of today and the Roman and Persian empires of nearly two thousand years ago.

Christianity and broader Judeo-Christian values, suggested both Bannon and Mansour, reinforce Western Civilization’s sense of purpose in the face of internal and external threats.

The migration of tens of millions of Muslims to Europe in recent decades, said Bannon, is an existential threat to Europe and modern iteration of aforementioned civilization conflict between Western and Islamic societies: “The entire situation with this mass migration and refugee situation, which is really, there is no doubt, is starting to destroy Europe.”

Listen to the full audio of Mansour and Bannon’s discussion on Breitbart News Sunday above.