“I’m the only Republican that represents New York City in Washington,” she said. “So my message — when I speak on the floor of the House — is don’t do to the country what we’ve seen happen in New York City. … I know what it’s like to live under one-party rule.”

Qualified law enforcement officers were being lost to the Democrat-supported “defund the police” campaign and vaccine mandates, Malliotakis noted.

She remarked, “We’ve lost people already in [New York City’s] police department, because of the defund the police movement cutting a billion dollars from their budget, tying their hands. They have seen record retirements, particularly from detectives, people who are seasoned [and] that are experienced. We need those crime solvers in the NYPD. Now, you’re coupling that with a new announcement today by [Mayor Bill de Blasio] that they’re going to mandate the vaccination, and there’s no longer that option of being weekly tested, [or] you will be fired.

“This is creating even more problems with losing qualified people in our police department, our fire department, [and] teachers,” she added. “It’s  a total mess. This is all on top of what we’re seeing in terms of giving people more to be on unemployment than to stay home, which has led to a lack of workers in other industries. They are literally punishing production and work in this country.”

She continued, “That is what the socialist mindset is, to penalize people who produce, and they’re doing it, and we’re seeing the results of all of it. We’re seeing the supply chain shortage. We’re seeing the inflation [and] rising costs, the cost of everything going up. We are seeing our cities less safe, and it’s all a result of Democrat-run cities and states and policies that have been put in place that are disastrous.”

She stated, “The ports are open, but there aren’t enough workers, particularly when it comes to warehouseing, [and] particularly what it comes to truck driving, and that is why we’re seeing this … Incentivizing people to stay home by giving them more money than to report to work and mandating these vaccines now are going to take an additional toll, and that’s that’s what occurred. It’s affecting every single person.”

Malliotakis concluded by highlighting the White House’s mockery of the impacts of inflation and supply chain breakdowns on Americans’ quality of life. 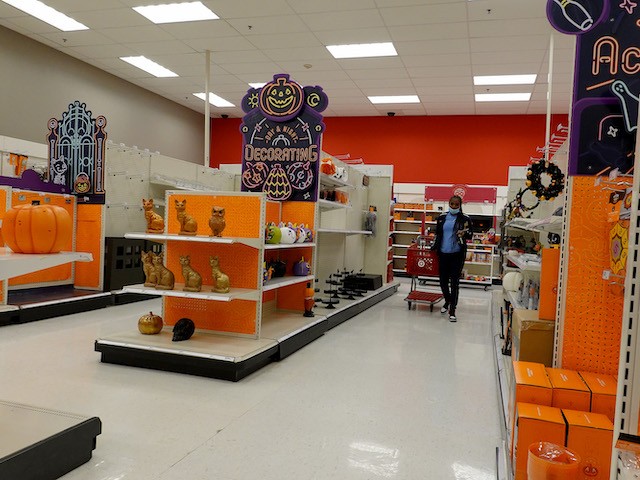 Empty shelves dominate the Halloween section in a Target store on October 13, 2021 in Miami, Florida. Shoppers are being encouraged to shop for costumes and supplies early as stores struggle to maintain holiday stock due to disruptions in the supply chain. (Joe Raedle/Getty)