Ohio Republican Senate candidate J.D. Vance spoke on Breitbart News Saturday about the tremendous political double standard that exists. His comments came after his Democrat opponent, Tim Ryan, called to “kill and confront” supporters of former President Donald Trump and the MAGA movement, and he noted that Ryan and other Democrats who are using this divisive rhetoric are essentially saying Americans “become an enemy of the United States government” if they vote for the “wrong person.”

This week, Ryan took the divisive rhetoric against the MAGA movement espoused by President Biden a step further, stating that Americans must “kill and confront” the movement. Vance first pointed out the great hypocrisy of the left, imagining what the news cycle would look like if he said the same thing about Democrats or Biden supporters.

“The New York Times would not be writing a story about the Trump rally today. They would be writing a story about me being a violent extremist who is trying to get my political opponents assassinated. So first of all, let’s, like, just take stock of the double standard of the media, the fact that they would completely lose their minds if a Republican said that,” he said.

But what is, perhaps, more stunning, Vance, said, is the fact that his opponent has tried to posture as “some sort of moderate Republican or even a conservative Republican.”

“He talks about how he agreed with Trump on this or that issue. … But he says that he believes these things. So he’s trying to posture as this, like, conservative MAGA guy in his TV commercials, and yet, when he’s unscripted, he lets loose and says we need to kill and confront this radical movement,” Vance said, calling Ryan an “unbelievable fraud.”

“What an unbelievable thing to talk out of both sides of your mouth within a week, to run TV commercials, on the one hand, saying that you support all of these Trump policies, and then to say that the movement needs to be confronted and killed. I don’t know how anybody can do that and look at themselves in the mirror, but I’m not a Democrat politician. So I don’t have to do that,” Vance said, discussing how Democrats do this often, insulting half the country.

“We disagree with one another, but you don’t have the leader of the country attacking half of the country because they voted for the wrong person,” he continued, explaining that Trump and other notable Republicans did not do that to Hillary Clinton voters.

“That’s exactly what Joe Biden is doing. This is really unprecedented. And I think it’s pretty dangerous. Effectively, what they’re trying to do is say that if you voted for the wrong person, you have become on the outside looking in of your own government. You become an enemy of the United States government. And that’s pretty ridiculous, given how many people who voted for Trump in 2016 or 2020, serving the military, have their kids serve the military, actually do a lot of the jobs to keep this country running and working on time,” Vance said, deeming this all part of the “Tim Ryan playbook.” 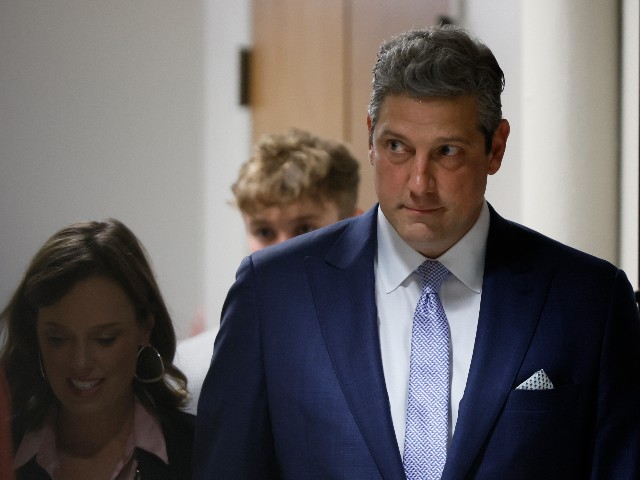 U.S. Rep. Tim Ryan, a Democrat running for an open U.S. Senate seat in Ohio, waits to go on stage to speak to supporters after the polls closed on primary election day Tuesday, May 3, 2022, in Columbus, Ohio (AP Photo/Jay LaPrete).

“He’s a progressive Democrat. He always votes with a left wing. He’s not a Joe Manchin guy, where you at least have a doubt in your mind about whether he’s going to bend the knee to Joe Biden and Nancy Pelosi and Chuck Schumer. He always does exactly what they tell him to do,” Vance said, pointing to Ryan’s far-left voting record.

“It’s all made up. It’s all a big joke. That’s meant to trick the people of Ohio into electing one of the most radical members of Congress into the United States Senate,” Vance added. “The good news for me, and the bad news for Tim Ryan, is that we in Ohio are not the idiots that he thinks that we are; we’re not letting him pull the wool over our eyes. We’re not gonna let him pull this.”