LeBron James’ transition from owner of one of the best stories in sports history to becoming one of the most thoroughly unlikeable celebrities in America is nearly complete.

As Sports Illustrated’s “Sportsperson of the Year,” James capitalized on his cover photo and attached a safety pin to his coat to make a political statement against Donald Trump. The safety pin signifies solidarity and support for women, minorities, and immigrants. 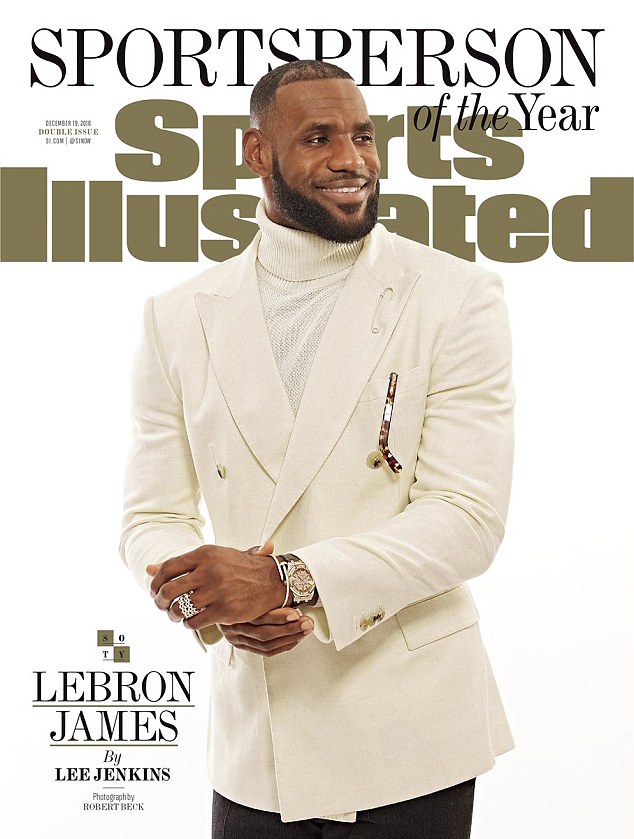 James campaigned with Hillary Clinton, and recently refused to stay at one of Donald Trump’s hotels when the Cavaliers came to New York to play the Knicks.

James accepted the award while paying tribute to black athletes of the past, and their stands on racial justice. James said, “This award is for the great Muhammad Ali, for Bill Russell, for Jim Brown, for Kareem Abdul-Jabbar. They sacrificed everything that could’ve happened to them. [They] could have been stripped of everything that they had accomplished to that point. But their calling and their reasoning for doing what they had to do was for a night like tonight.

“That in 2016 in Brooklyn, New York, we all can sit up here as African-Americans, white Americans… that we all can sit in one room and just say, “wow, this is an unbelievable night in not only sports, but in life.” It’s never about the individual, it’s always about the people behind him.”

While borderline narcissistic in claiming that he represents the culmination of the racial justice movement, James cloaking himself in the racial justice warrior ethos of the past is no accident. James has fully embraced the modern racial justice ethos: James and his teammates took a picture with their hoodies on in tribute to Trayvon Martin, wore an “I Can’t Breathe” t-shirt in solidarity with Eric Garner, and took the stage at the ESPYS to speak out against police violence.

In many ways, LeBron has fully embraced becoming the anti-Michael Jordan. Jordan, the player whom LeBron is most often compared to, was viciously criticized for not using his celebrity for political activism. LeBron, who has openly stated his goal is to chase Jordan’s “ghost,” has re-written his own activist history by participating in the political activism that Jordan shunned.

How much of LeBron’s political activism stems from what he believes, and how much is the result of his attempts to “right Jordan’s wrongs,” no one knows. All we do know is that LeBron will somehow make minorities safe by wearing a giant safety pin.

That should make everything better.