A Saudi cleric named Mohamed Alarefe has tried to spur FIFA towards imposing an official ban on players who make the sign of the cross during games.

Alarefe, a professor of religion at King Saud University in Riyadh, Saudi Arabia, posted his call on Twitter. Alarefe wrote: ‘I’ve seen video clips of athletes, soccer players running, shooting and when they win they make the symbol of the cross on their chests and my question is if FIFA’s rules forbid this.’

Alarefe apparently has no such concern over the several different Muslim players who have been known to drop to their knees and perform Muslim prayer after they score a goal. A fact that Twitter users reminded Alarefe of: 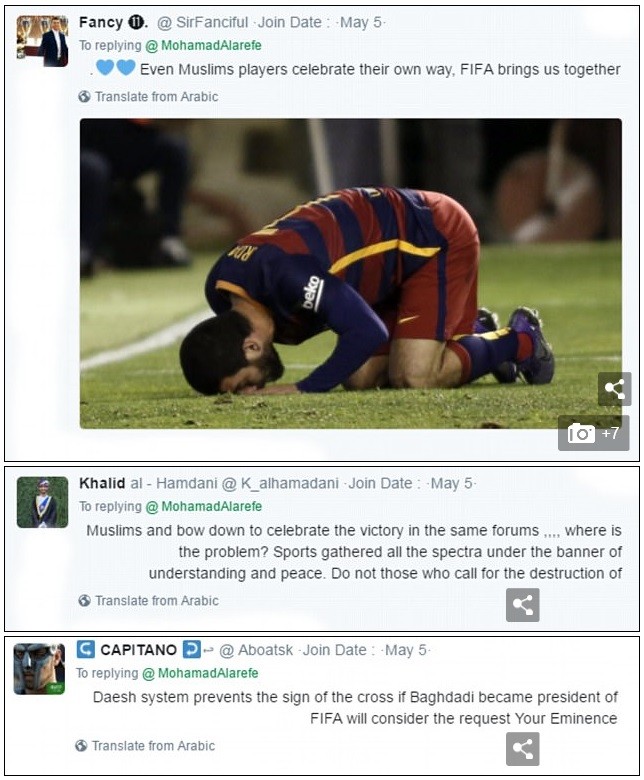 The term “Daesh,” in the tweet from user “Capitano,” is primarily used in Europe and parts of the Middle East as another way of referring to ISIS.

This isn’t the first time that Muslim sensibilities have clashed with Christian expression. According to the Daily Mail, “In 2014, Real Madrid removed the Christian cross from its crest when used by its sponsor the National Bank of Abu Dhabi .

Alarefe holds no controlling financial interest in FIFA, an obvious distinction between his call for a FIFA ban against the sign of the cross and the Abu Dhabi bank’s removal of the cross from Real Madrid’s crest. However, FIFA has caved several times when Muslims have raised concerns over Christian symbolism.