An argument in Alabama over last weekend’s game between Alabama and Texas A&M ended in a deadly shooting, local police said.

Two men began arguing about the college football game inside a home in Bessemer, Alabama, a southern suburb of Birmingham. Bessemer Police Lt. Christian Clemons said that the argument was over which team was better, according to AL.com. 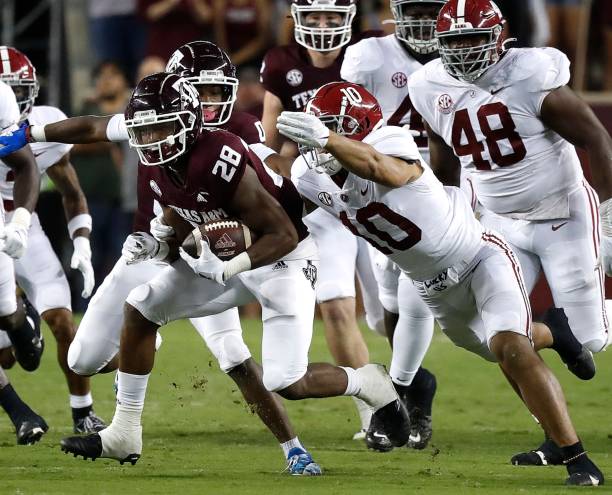 COLLEGE STATION, TEXAS – OCTOBER 09: Isaiah Spiller #28 of the Texas A&M Aggies rushes past Henry To’oTo’o #10 of the Alabama Crimson Tide in the first half at Kyle Field on October 09, 2021 in College Station, Texas. (Photo by Bob Levey/Getty Images)

The homeowner told officers that he told the men to take their argument outside, but minutes after the pair left, shots rang out, and 27-year-old Kealand Amad Pickens was lying on the ground shot.

“The two were arguing over which team was better and the homeowner told both to leave,” Lt. Clemons told WVTM 13. “Once outside the residence, shots were fired.”

Pickens was rushed to UAB Hospital but was pronounced dead at 3:23 a.m. on Sunday morning.

The police know the identity of the shooter, though he is not yet in custody.