American Caitlan Coleman, whom the Taliban took hostage while she was pregnant and held her captive in Afghanistan for five years, placed blame for the ordeal on her Canadian husband and fellow captive, Joshua Boyle, saying his sympathies towards the group led to their travel to the country and her having three children in captivity, ABC News reported Wednesday. 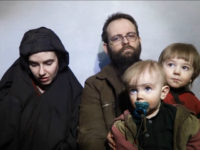