Actress and left-wing activist Bette Midler lamented the current state of political discourse – saying that “it feels as though we are all much less classy” and noting that “shame has gone missing” – but completely ignored the fact that she has been a leader of launching vicious attacks against President Donald Trump, his family, GOP lawmakers, and Trump supporters. 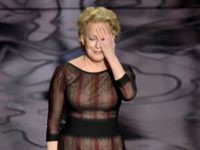