Sen. Elizabeth Warren (D-MA) plans to introduce a bill that would effectively rescind the Medals of Honors related to the Wounded Knee Massacre. 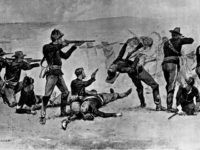 Three Democrats, a Republican, and Native Americans from several tribes are holding a press conference on Tuesday to push for passage of a new bill, Remove the Stain Act. The legislation would revoke the Medal of Honor that was given to members of the United States Army that fought in the battle of Wounded Knee in 1890.