On the face of it, “Why do so many angry women seem to have blue hair?” doesn’t seem like one of the most pressing issues of our time. Yet the more you think about it, and the more time you spend on the internet, the more you realise how much it matters.

If you’re young, were born with XX chromosomes, and want the world know you wield poison and you’re not afraid to use it, there’s no clearer or more immediate way to signal how dangerous you are than dipping your coconut into a vat of de rigueur Manic Panic.

Take one look at Twitter – or, worse, Tumblr – and you’ll see that, increasingly, the barmiest, angriest feminist cry-babies in the world are rallying together under the Blue Banner.

Now I’m not saying for one minute that every blue-haired woman is a man-hating, sociopathic bunny boiler, in the same way not all Twitter users with ‘I voted Corbyn’ across the bottom of their avis are not all sanctimonious, retrograde socialists who want to take the UK back to the warm beer/pork pie and sex-with-the-pet-whippet days of the 1960s. Some are no doubt perfectly well-adjusted and productive members of society.

But there are enough blue goons to make the case for the prosecution beyond reasonable doubt.

You’ll catch them at all high-profile anti-authoritarian events, because there’s no better way of rebelling against The System than looking exactly the same as everyone else.

They’re like rad-fem glow-worms: sending out little flares of despair that say: “Let’s join together through shared misery, contempt of straight-acting men, a preference of cake over cock and a slightly creepy dependence on cats.”

One must further ask: is this toxic slick of blue hair dye causing irreparable brain damage among those who seriously overindulge?

Early symptoms include an obsession with transgender pronouns, feminist conspiracy theories, rape culture, a belief that misogyny is everywhere if only you look hard enough… did I mention they’re obsessed with cats? 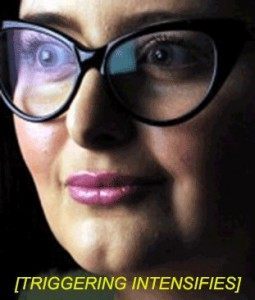 Does blue hair dye also have an effect on an abuser’s eyesight? What else can explain the True Blue’s obsession with compulsory feminist “statement spectacles”? These are usually peeked over, with an affected pseudo-intellectual, smarmy, shit-eating grin that shoots out a withering contempt for all but the right-on third-wave sisterhood.

Other symptoms include holes in lips and septums, plugged with metal rings, and sometimes massively distended ear lobes, which in extreme cases need to be filled with earrings the size of ice hockey pucks.

The overall effect is one of the most repellent acts of physical self-destruction in all of human history.

Nature has a name for wielding unusual colour as a warning sign: aposematism, from the Greek ‘away’ and ‘sign’. And blue is one of the most unnatural colours of them all.

In nature, there are no blue foods, so consequently we have no natural appetite for it. Even blue cheese is white cheese with mould on. 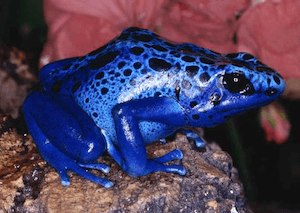 The adoption of blue hair by liberal SJWs is even more curious when you look at the history of blue hair.

The “blue-rinse brigade” used to be a derogatory term for coffin-dodging middle-class women, who formed the backbone of the 1970s British Conservative party. Today’s blue-haired teens are their polar opposite.

So who are the mane offenders in this disturbing internet trend? Well, too many to mention really but here are a couple I’ve spotted in the last twelve months. 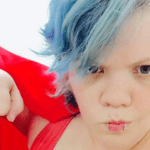 Plump anti-harassment activist Randi Harper turned most persistent and obnoxious troll on the internet Randi Harper is so fond of hair dye, she even dyed her dog, Leo, turquoise. Which must surely be illegal outside of San Francisco or at least Paris Fashion Week. 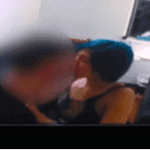 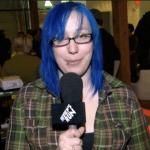 Over at #GamerGate, dyed hair is so commonplace on the anti-side, it has been called “the female fedora.” Professional Victim Queen Quinn has dipped her bonce in most dyes: blue, purple, neon pink – she is aposematism’s chameleon – but she looks most at home with this electric blue ‘do.

Take my word for it, Tumblr is awash with blue-haired weirdos. Riddled with trans and Otherkin nonsense, extreme suffers exhibit mermaid, unicorn and pixie delusions.

On Fuckyeahbluehair and Girls With Blue Hair there are hundreds of girls, several of whom almost smile. (Smiling and blue hair don’t seem to”go,” usually.)

Amidst these special snowflakes with their “magical unicorn hair” there are even a few solitary males: manginas, pierced geeks and a “queer baby pixie” who will make you want to give up on men for the rest of your days.

If you look hard enough, there are some hot girls with blue hair, just as there are several hot amputees. (Honestly, Google it.) Most, however, are the human equivalent of the poison dart frog: why eat them when it could prove to be deadly?

On Facebook, the group “Random hot chicks with blue hair” has a mighty seven blue-haired females, but then one of them is Katy Perry, and she is hot irrespective of hair colour. 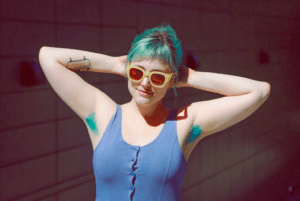 When blue hair alone isn’t enough, pray silence for the Free Your Pits “movement” (like a bowel movement, only less enjoyable) which encourages armpit hair to be dyed. Free Your Pits comprises a loose collective of Canadian gender studies undergrads, San Franciscan vloggers and tweens who think they were born pixies.

The Huffington Post’s Natasha Hinda gushed, “Who knew it could look so artistic? From purple and pink pits to, our personal favorite, a matching turquoise hair and armpit combo, it’s safe to say that these ladies have no qualms about growing and showing. These ladies see their colorful pits as a way of reclaiming their bodies from media perceptions.”

The trend was driven in late 2014 by feminist magazine Jezebel, who discounted the Islamic State and the Syrian refugee crisis as women’s issues and stated, “2015 is going to be about two things, and two things only: Armpit hair and colorful dyes”.

Reporting on a recent “pit-in,” Ashley Faulkner of The Feminist Society of Pensacola in Florida said, “We sipped mimosas, talked about feminist things and dyed our pits teal.”

The ultimate blue statement is when the carpets match the curtains and the valance: the terrible triage of dyed head, pits ‘n’ pubes. On the Tumblr dyed-pubes there are some 159 pictures of dyed pudenda. Often supplemented with blue vajazzles, statement clit piercings and heavy, labia-distending metal work, there is even an ominous blue strap-on that looks like a cross between a Smurf and Pinocchio. Honestly, who’d want to put your hand inside a pair of pants only to find something that looks like an angry extra from Fraggle Rock?