In celebration of Halloween, the Breitbart Tech team brings you our favorite scary games, both new and old. Some of these may not fall specifically under the umbrella of the horror game genre but made the list based on their intense or unsettling gameplay experiences. Happy Halloween! 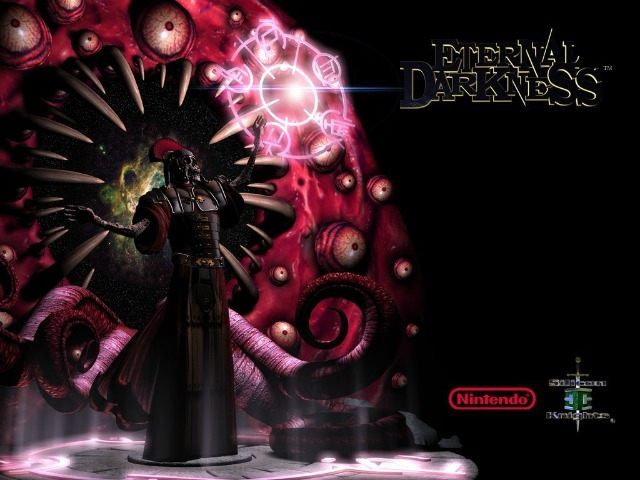 In order to decide which of the staff got to claim Eternal Darkness, we organized a series of duels atop a dark Transylvanian cliffside. Everyone who plays this game loves it, and I earned the coveted right of authorship only by murdering all of my foes. The Breitbart Tech writing staff may now be very thin, but I got my way. Priorities.

Eternal Darkness: Sanity’s Requiem sends you through history, across generations of a bloodline tasked with protecting the world from an evil that Lovecraft would no doubt appreciate. Indeed, it draws heavily from that lore beyond the stars, but does so with a panache from beginning to end that very few games can achieve for even a moment.

I’m not sure whether it was because I nearly destroyed my television when I foolishly decided to play in darkness and the game trolled me with the silhouette of a cockroach crawling across my screen. Maybe it was the way that even the most simple moments could turn inexplicably horrific at the drop of a hat.

The game deftly transitions between things that would horrify you as the character and things that are meant to directly unsettle the person holding the GameCube controller. One moment you’ve turned to see a bathub filled with blood, the next your savegame is seemingly being erased. The effect is perfectly, masterfully stressful.

It isn’t just one of my favorite horror titles, it is definitively one of the greatest games ever made. This entire list is thick with universally lauded experiences, but no other game has personally haunted me like the masterpiece that is Eternal Darkness. 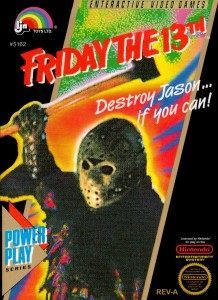 Let me slip on my nostalgia goggles for a bit here and go all the way back to 1989. Me and my friends are huddled around a 20 inch color television, scaring the bejesus out of each other. We have no idea we’re playing a game we won’t beat for 15 years. I’m talking of course about Friday the 13th for the NES, released before Jason Goes to Hell: The Final Friday, back when the movies were still pretty good (for an 8 year old anyway.)

I’m not going to hit any points a million reviewers haven’t hit before: the game is hard, the game is fun, and the systems are pretty advanced (and terribly dark) for an NES game of its time. I’m also not going to dwell on some of the odd “cannon” the game adds like zombies, floating heads, and rabid attack birds. I won’t even talk about how it was one of the first great jump scare games. (“SURPRISE, IT’S JASON MOTHERF*CKER!”)

Why it was scary to me is the word “Children” and a number next to it at the top of the screen. I remember working my way dutifully through the game and then seeing the number next to “Children” tick down once. Then again. It was then that I realized, “Oh my God, he’s killing KIDS,” and for the first time in a video game I MOVED MY ASS. There’s something about a game making you feel responsible for the innocent that’s both invigorating and unforgettable. 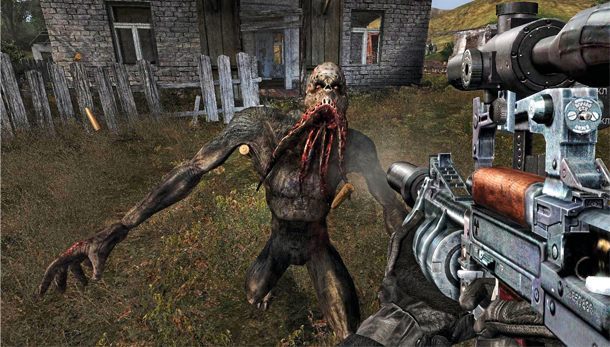 S.T.A.L.K.E.R. is a dark and bleak free-roaming FPS set in post-meltdown Chernobyl, meticulously handcrafted after the real world location(s). It is cold and miserable; scavengers, scientists, and mercenaries all roam the abandoned geography of Ukraine, searching for food, weapons, and artifacts.

Firefights, sirens, and mutated monsters howling in the distance are all audible as the dynamic AI moves throughout the game world, with bandits fighting off wild dogs as storms roll across the landscape and paranormal anomalies create deadly traps for the player. Abandoned buildings with leftover furniture, odd graffiti, and wildlife taking over what man has abandoned create creepy and memorable locations.

Drawn to exploring all of it, many will overstay their welcome, and the Zone is not forgiving.  Monsters lurk in the pitch black darkness of Chernobyl, changed by the radiation around it, and they hunt. Night falls, and only dread remains. 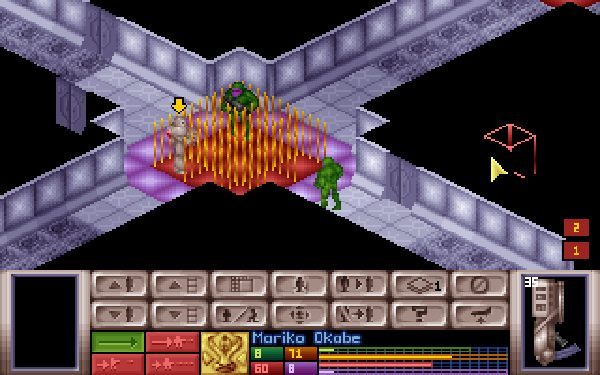 Although not a horror game, X-Com: UFO Defense is certainly the most horrific game I’ve ever played.

A typical X-Com playthrough was full of dread-inducing moments: fresh faced rookies rushing off the Skyranger with inferior equipment to investigate their first downed UFO or taking long range plasma rifle shots at a sectoid hoping beyond hope to kill him before he could launch a blaster bomb.

X-Com’s creepy music and sparse graphics, combined with the turn-based gameplay, draw the player deep into the game. Those that have played it remember staring carefully during the alien’s turn to detect clues as to their location.

Repressed in the deepest corners of my brain are the two worst events in the game. Firstly, watching an innocent civilian being converted into a zombie by a chryssalid, just as much nightmare fuel as anything from today’s horror games. Secondly, aliens taking over the mind of my squad mates, who would then gun down their brothers in arms while I watched helplessly.

Now if you’ll excuse me, I’m going to fire up this classic on Steam and celebrate Halloween by saving the earth. 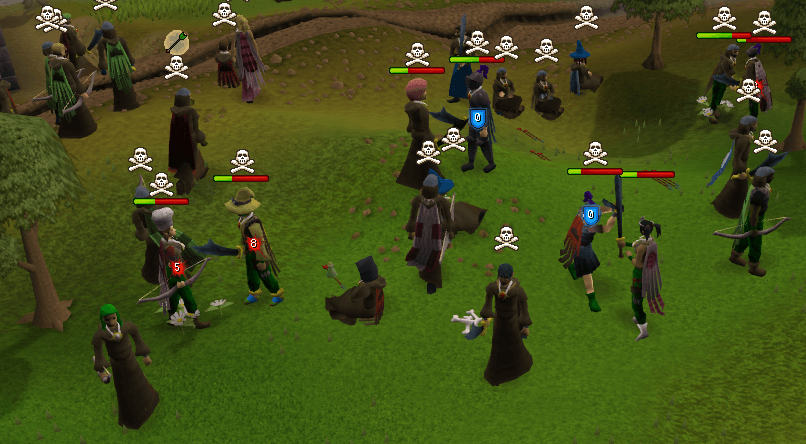 Runescape is an ancient MMORPG (Massively Multiplayer Online Role-Playing Game) that remains active more than 14 years after its creation. The game predates World of Warcraft and retains a unique character that is absent from many MMOs that sought to emulate WoW’s success. But is it scary?

While the game features all manner of ghosts and ghouls (and even a Luigi-style Haunted Mansion), the real sense of danger in the game comes not from monsters, but players. Runescape is one of the few MMORPGs that features a risk-vs-reward system of player-vs-player combat.

When you step into the game’s foreboding PvP zone, known as “the Wilderness,” there’s a good chance you could lose all your items to another player. And because Runescape is a grind-intensive MMO, obtaining those items could have taken anywhere from weeks to months. There’s nothing quite like the feeling of being stranded in the Wilderness wearing your best suit of armor, ten minutes from a teleport point. You’ll be jumping at shadows. 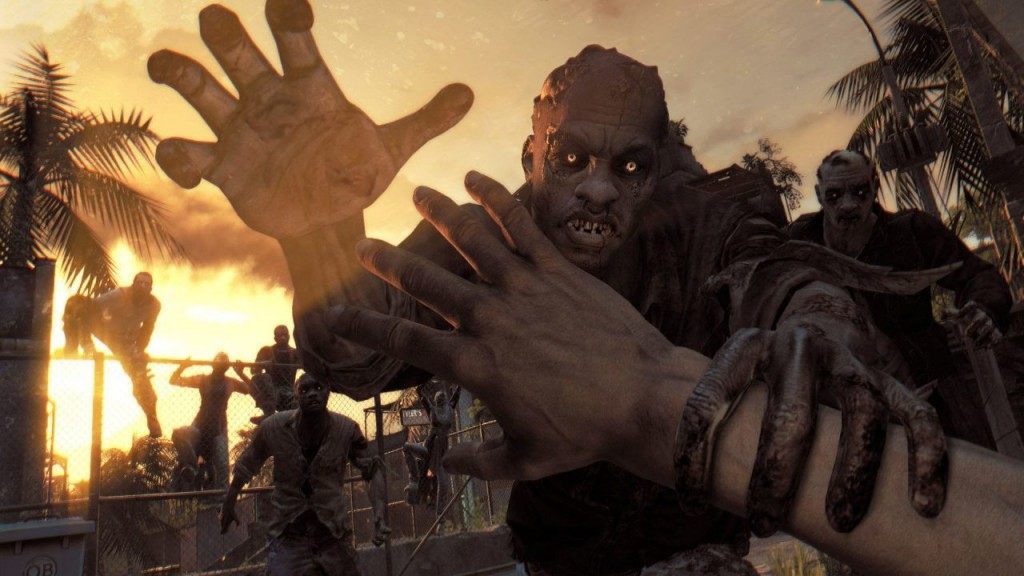 I was torn between writing about Dying Light, Rebellion’s 1999 horror FPS Aliens vs. Predator, or the original Dead Space, as all three are the only games I can think of that freaked me out so much that there were points that I had to shut down the game and walk away rather than keep playing. In the end, Dying Light is one of the best games I’ve played this year, and I couldn’t pass up the opportunity to gush over it.

I’ve been a fan of Polish developer Techland’s games for years, from the early days of Chrome to the criminally underrated Call of Juarez series (let’s just pretend The Cartel never happened, ok?). 2011’s Dead Island brought the studio more mainstream attention, but Dying Light was extremely polished and slick to match the game’s level of ambition, something that had been lacking from Techland’s earlier, more rough-around-the-edges releases.

Set in the fictional city of Harran which is under quarantine due to a zombie outbreak, Dying Light casts players as an undercover agent sent into the city to target a political firebrand that has emerged from the chaos and supposedly possesses information that will damage the multinational Global Relief Effort (your employer). Players start out ill-equiped to handle the city’s hordes of undead; a single zombie can present a significantly challenging fight to the death in the early hours of the game, let alone roving packs of multiple ghouls.

The game’s free-running movement system encourages you to use the environment to evade, escape, or fight enemies, and when faced with overwhelming odds, the fight-or-flight response kicks in and screams at you to scramble up a house and book it across the rooftops.

Even as your character levels up and gains new abilities and weapons to engage the ravenous hordes, the game continues to throw challenges at you to keep the tension up, from various “freak” zombies with special abilities to squads of human raiders and bandits armed to the teeth and ready to shoot you dead in the street.

And then there’s the darkness.

Dying Light features a full day/night cycle, and when the sun goes down, things go from bad to worse. Zombies become more aggressive at night, but the real danger comes in the form of the Volatiles, the ultimate zombies in the game’s universe. Able to kill you in a single attack, run just as fast as the player, and scale buildings and obstacles to track you down, the Volatiles own the night. Your best bet? Find shelter for the night and sleep until the monsters go away.

I’ve rarely felt fear playing a game like when you can see the sun going down in Dying Light, with your home base warning you over the radio to come back or seek safety as you frantically try to finish up whatever quest you’re working on. A number of the game’s quests can only be completed at night, forcing you to face the darkness and stealthily move through the city, praying that the roaming Volatiles don’t see you or that the noise you made fighting off a pack of regular zombies you stumbled into don’t draw them to your location.

With illumination provided only by the eldritch glow of my screen, the last of my sanity draining from my mind, I am determined to type my game review as a warning to mankind.

The plot is only vaguely referred to by the mad Arab Abdul Alhazred in the Necronomicon. It hints at beings bearing a striking resemblance to pictograms found in the pre-human ruins at the plateau of Leng as excavated by Dr. William Dyer of Miskatonic University.

The graphics are non-Euclidean monstrosities that should never be witnessed by man, created by an elder race who crossed starless aeons for unspeakable purposes. The music was surely prepared by Shub-Niggurath, The Black Goat of the Woods with a Thousand Young.

There is nothing more terrifying, nothing that induces powerlessness and helplessness or reminds players of the fragility of human existence or the monstrous, preternatural weakness we all feel in the face of soul-guzzling Huge Star Packs.

It’s a gaming experience that left me chanting to lord Cthulhu, who waits dreaming in his house at R’lyeh. 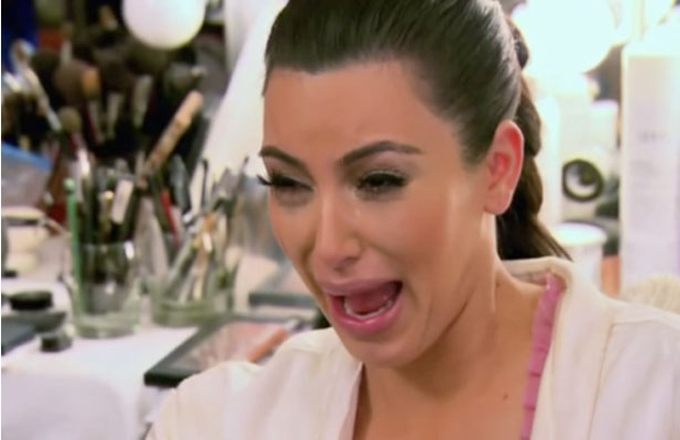