The blogging platform Tumblr has become a byword for the wackiest politics of the fringe left. It’s the touchy-feely home of people who identify with a vast range of allegedly oppressed demographics, including “otherkin,” “transethnics” and “demisexuals.” Yet for some, the site isn’t “safe” 0r progressive enough… so they’re building a competitor.

Dubbed “PillowFort,” the proposed Tumblr alternative promises “a place where fans and creators alike can share their work, create a community of their own, and do so in a positive and safe environment.”

PillowFort promises to combine the features of Tumblr with those of LiveJournal, an older blogging platform known for its eclectic communities. Its creators promise to add new privacy-oriented features including the ability to block users, the ability to make blog posts “unrebloggable” (on Tumblr, anyone can “reblog” another blogger’s post to their followers), and a Facebook-style “list” feature, which makes bloggers’ posts only viewable to a select group of people. Like Reddit, PillowFort will also have moderators who police its user-created communities.

In other words, its the perfect platform to create safe spaces. The proposal was instantly welcomed by online social justice warriors such as the cartoonist Andrew Dobson. 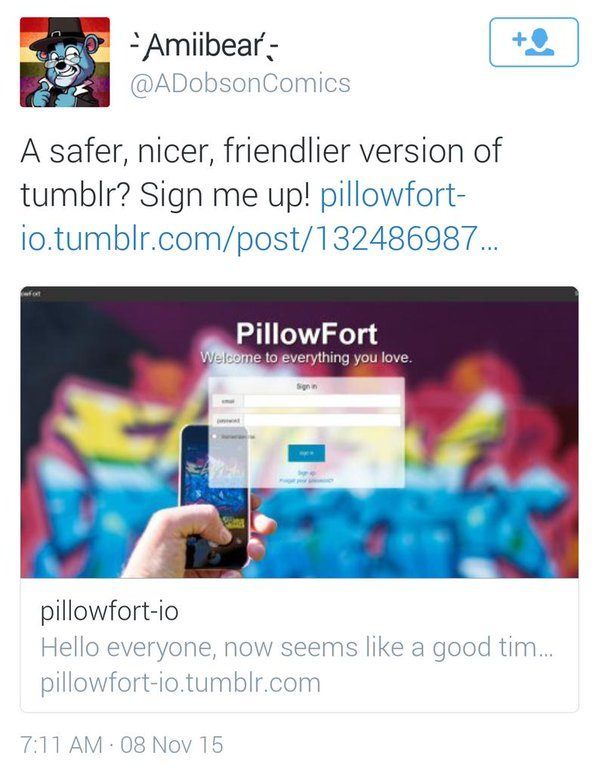 PillowFort also promises a harsh regime against harassment and far-right politics. “Nazi” bloggers who attempt to set up shop on PillowFort will have their accounts terminated, as will any blog that “threatens another user” or “encourages suicide.”

Tumblr has long been known as ground zero for wacky identity politics. Its communities go beyond even the most radical U.S. campus. The site’s various identities include otherkin (people who believe they are animals born in human bodies), transethnics (proto-Rachel Dolezals who believe they were born the wrong skin colour) and the “headmate community” (people who have imaginary alternate personalities and believe that anyone who doubts their existence is oppressive).

The blogging platform is so notorious for its radical identity politics and rabid social justice community that the most successful anti-SJW community on Reddit remains /r/TumblrInAction, a user-created “subreddit” dedicated to mockery of Tumblr’s excesses.

Nevertheless, claims that Tumblr is an unsafe platform could be bolstered by the recent case of Paige Paz, otherwise known as “Zamii,” which we covered at Breitbart Tech. Paz is a young artist who was bullied into a suicide attempt by the social justice community on Tumblr, after her artwork came under fire for being allegedly “problematic.”

If they want a truly safe platform, perhaps the creators of PillowFort should consider banning SJWs as well as “Nazis.”