The Associated Press (AP), the New York Times, and CNN’s Anderson Cooper were suckered by an online troll who claimed to be an eyewitness of the recent mass shooting in San Bernardino, California.

In a well-established pattern, the troll blamed the mass shooting on GamerGate, the movement against poor ethical standards and political zealotry in the world of video games journalism.

The troll, who claimed their name was “Marie A. Parker” told AP that one of the shooters said he was killing people “for necessary ethics” and wore a shirt emblazoned with a “GG” logo. Her comments, including her insinuation of GamerGate’s involvement, were published by the AP.

Parker was planning to meet her family to celebrate her birthday but got the address mixed up and ended up in front of the Inland Regional Center.

She realized her mistake and was walking back to her car when she saw a man decked out in tactical-style clothing carrying a long gun. He screamed something she couldn’t understand before bursting into the building and immediately opening fire.

Parker said she sprinted for a nearby building where she hunkered down with a handful of other people, some of whom who were hysterical or crying. Among them was a woman who had encountered the gunman in an alley as he prepared for his deadly rampage.

He told the woman not to move or say anything. When she asked what he was doing, he replied, “for necessary ethics,” according to Parker. The woman said he had a strange emblem on his shirt with the letters GG on it. He didn’t harm her, just asked her to stay quiet, Parker said.

When the shooting ended, Parker said she ran for her car and fled.

The AP’s story has already been republished by mainstream news outlets, including the New York Times, which republished “Marie’s” faux testimony in full.

The troll was also invited onto CNN, where she was interviewed by no less than Anderson Cooper.

Breitbart Tech obtained an exclusive interview with “Marie,” who told us that she was able to hoax the media with remarkable ease:

When the shooting occurred and made it’s way to the news, I tweeted saying how I was in hiding at the shooting and I had gotten a glimpse of what happened. Immediately a bunch of reporters kept following and dming [direct messaging] me asking me if I wanted to be interviewed. Then someone from CNN asked me to be on Anderson Cooper. I took that interview. Took a few hours but I finally got put on the air. I didn’t get to say anything I wanted but it was still pretty amazing how I somehow made my way on the broadcast.

According to Marie, the journalists who contacted her did not ask her to verify her identity or prove she was at the scene of the shooting: “The journalist asked me for my last name. I just gave him a fake name. Didn’t ask for any proof either.” Marie added that the AP journalist did not ask her follow-up questions after she claimed to have spoken to the shooter, and just “sent me a DM saying he published it.”

Twitter screenshots show she was contacted by multiple journalists prior to her appearance on CNN. 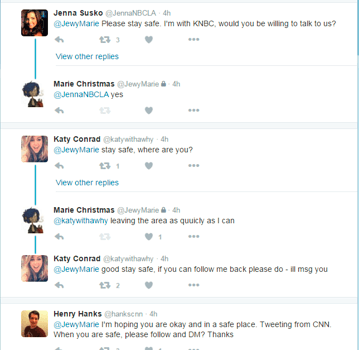 This is not the first time trolls have successfully convinced the media that GamerGate supporters have committed a horrific crime. Following the murder of two journalists in Virginia last August, online trolls convinced a local news outlet, WSBTV, that the shooter was a supporter of GamerGate. WSBTV later retracted their story.  Prior to that, multiple media outlets including Gawker and The Verge fell for a troll by Jace Connors, an associate of notorious hoaxster Sam Hyde, after he posed as a violent, gun-toting GamerGate supporter.

Media outlets have also fallen for other trolls in recent months. During the Baltimore riots, trolls falsely convinced a local FOX affiliate of the long-running myth that libertarian cartoonist Ben Garrison was a violent white supremacist and was en route to Baltimore.

On other occasions, the media has mistakenly labelled ordinary people trolls. The rise of anonymous Facebook pages for ‘White Student Unions’ on multiple North American campuses following racial unrest was widely and inaccurately reported as the work of online trolls with no connection to colleges. Breitbart Tech was able to debunk this narrative.