Analysis of over 150,000 NPR stories has shown a clear bias against men at the network, with stories about women’s issues covered far more frequently than men’s.

Blogger Chris Mumford wrote a computer program that analysed hundreds of thousands of NPR’s story “tags” – the metadata associated with articles that tells you which category of news the story is covering. The results, which covered stories from 2010 to 2015, were shocking.

Mumford found that there were only 45 tags related to men and men’s issues, compared to 115 for women and women’s issues. Furthermore, unlike the female tags, several of the male tags had negative connotations, including “black male privilege,” “yes men,” and the oddly specific “creepy men on motorcycles” tag. 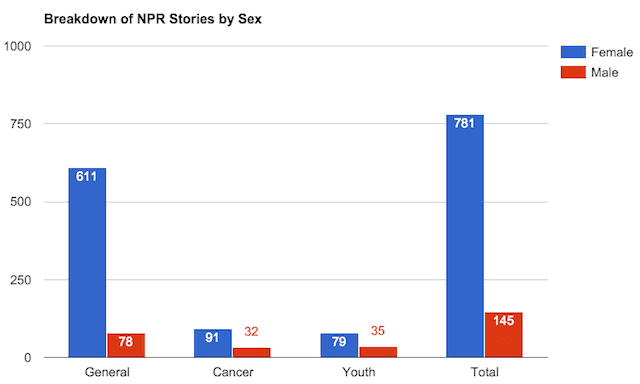 There was also a wide gap in how often articles about male issues appeared in NPR, compared to female issues. Mumford’s analysis found that there were 5 times as many articles about women and women’s issues as there were about men and men’s issues. That means that there are approximately 5 articles tagged as female for every 1 tagged as male. Now there’s a believable “1 in 5” statistic!

This isn’t surprising, as society’s bias towards female cancers is already well-known. It’s widely acknowledged that far more research funds are lavished on female cancers than male ones.

The problem seems to be getting worse, not better, with funding for prostate cancer activities slashed from this year’s CDC budget.  The UK is no better, with Cancer Research UK devoting more than twice as much its funds towards breast cancer as opposed to prostate cancer.

Savvy observers of gender politics have long since noticed that there’s a bias toward women, women’s issues, and feminism across western media, despite the male suicide epidemic and increasing concern about men dropping out of society and falling behind in education.

Journalists don’t care. National and international media are awash with obviously biased reporting, such as the media’s absurd demonisation of gamers during the GamerGate scandal last year, or Sabrina Rubin Erdely’s Rolling Stone debacle, in which she recklessly recounted an anonymous source who falsely accused one of the University of Virginia’s leading fraternities of conspiring to rape women on campus.

Now, however, we can rely on more than just anecdotal examples to demonstrate systemic gender bias, not only in the mainstream media but in publicly-funded broadcasters. Anyone fancy running the numbers for the BBC?