Some call him Ben “One Man Klan” Garrison. To others, he is “Zyklon Ben.” Elsewhere, he is known as Ben “Not White? Shoot On Sight” Garrison. And those are just his milder nicknames.

But Montana-based artist Ben Garrison isn’t a violent Neo-Nazi, or even a white nationalist. He’s a polite, accomplished cartoonist, with no history of overt or covert racism. His true political leanings are libertarian, anti-elitist, and anti-globalist.

Garrison is, in fact, the victim of one the most extraordinary and longest-running smear campaigns on the internet.

For a mixture of amusement and spite, in a trolling spree that has lasted over six years, thousands of online pranksters and real neo-Nazis have been remixing his cartoons into racist caricatures. Most Ben Garrison cartoons attack the government, corporations, and political movements.

However, almost immediately after one is published, it is remixed into a new version that attacks Jews, African-Americans, or other minorities. These are rapidly disseminated in troll communities and sometimes become more widely-shared than the originals. Like the bandit gang in The Magnificent Seven, who perpetually raid the same town for food and supplies, Ben Garrison’s trolls keep coming back for more.

An original Ben Garrison cartoon on the left, and an anti-semitic remix created by trolls on the right.

But Garrison has more to worry about than just remixed comics. The trolls are more dedicated to their craft than that. They have spent years spreading the myth of Ben Garrison the white supremacist. One painstakingly crafted fake profile of Garrison claims the following:

Not much is known about Garrison’s early years, or what inspired him to racial violence. Some argue he was a product of his time and locale in an era of sudden racial progress; others say he’s the bastard son of Hitler himself, reincarnated with a vengeance

In an age where we’re overloaded with information and likely to believe whatever the search engines tell us, the trolling campaign has been remarkably successful. Speaking to Breitbart Tech, Garrison said the trolls have ruined his business opportunities.

“Do an internet search of my name and you’ll see me in a Nazi uniform, which can be a tad off-putting to potential commercial art clients. I lost a lot of work as a consequence. I now must try to make a living drawing the cartoons and selling paintings.”

Garrison’s trolls have even convinced journalists – supposed paragons of accuracy and investigation – that he is a white supremacist. During the Baltimore riots earlier this year, trolls flooded the online chatroom of a live FOX 10 Phoenix broadcast, and convinced the presenters that Garrison was an “anti-Semitic political cartoonist.”

Garrison, who has drawn cartoons sympathetic to GOP frontrunner Donald Trump, also says he has been approached by left-wing news organisations and groups who are fishing for Neo-Nazi Trumpites. “I’ve recently had a couple inquiries from some popular far-left websites,” says Garrison.

“They are fishing to find a ‘Nazi’ who supports Trump so they can play their stupid ‘gotcha!’ game. They soon lose interest when they find out that no, I’m not a Nazi kook and I don’t officially support anyone.”

Garrison says he doesn’t endorse any political candidates, but commends Trump for “shaking up the neocon-controlled Republican Party.”

“He doesn’t require a teleprompter to speak his mind and he doesn’t give two shakes about ‘political correctness.’ That’s refreshing. He’s also fun to draw.” 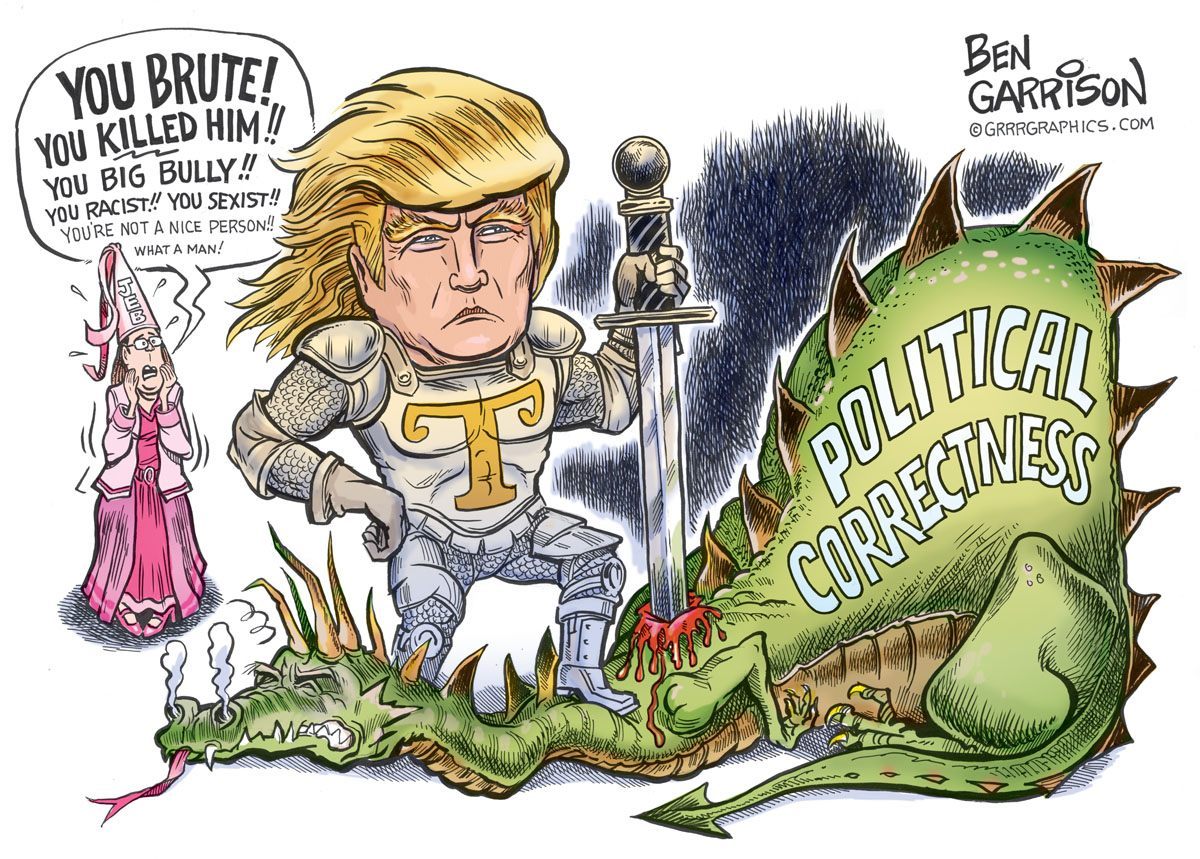 Both left-wing journalists and trolls want Neo-Nazi Ben Garrison to be real. But where, how, and why did the myth start?

“Around 2010, I found that one of my cartoons was vandalized after making an Internet search. Someone had pasted an anti-Semitic cartoon caricature over my work. My signature was left on it so that I’d catch the flak. It was easy to ignore the hate mail, but I could not ignore the defacement. I traced it to a personal website in New England. Someone was using it to illustrate his version of Nazism. It’s his right and free speech to promote such stuff, but the libel was actionable.

I politely asked him to remove the cartoon. He politely replied and said he would — and he did. But somehow other Nazi groups found out about it and my reaction triggered an avalanche of trolling. Various Nazi sites went on the attack.  I think a lot of that was led by [editor of The Daily Stormer] Andrew Anglin. By the way, Anglin is a troll who employs the Nazi schtick because it helps him generate more fear within his targets.”

It wasn’t only Nazis who were going after Garrison, though. 4chan, home of the internet’s most artful pranksters, quickly saw a chance for lulz. Garrison’s comics are a regular feature across the anonymous imageboard, a leviathan of web culture famous for turning obscure figures into memes – sometimes not for their own good.

“My wife also discovered another source,” Garrison explains. “4chan’s /b/ board.”

“I took a glance at that and found a lot of disgusting stuff. 4chan came with an iron-clad disclaimer. I could not sue the site and the posters were all ‘anons.’ I decided not to look at it again and I didn’t for several years. I ended up putting a disclaimer on my website and went back to ignoring the trolls.”

But the trolls didn’t stop, and the meme of Ben Garrison, The Violent Nazi continued to spread. Garrison had to fight for his reputation – but he says his efforts largely failed.

“When the dopplegänger pages began appearing on Facebook early in 2014, it marked a turning point. Trolls were using my name and face while calling for murder. I could no longer ignore what was being done to my reputation. I removed 10 dopplegänger pages on Facebook in 2014 alone and it didn’t help end the trolling.”

Garrison now says he “no longer cares” about convincing third parties that he is not a Nazi. “They can think what they like. I did the persuading in my first book and it was not successful. Maybe my second book will be.”

4chan might have nipped the problem in the bud when it first emerged. But it didn’t, and Garrison says he still retains retains “a bit of a grudge” against then-owner and admin Christopher Poole (a.k.a “moot”) for failing to do so.

“Christopher Poole, the former owner, could have stopped the trolling just like he did with GamerGate threads, but instead he seemed to encourage the off-topic attacks on me.”

The one entity with the power to save Ben now is Google. Many of the problems faced by the cartoonist could be undone with a simple adjustment of his search results, which currently return troll-edited results of him wearing Nazi outfits near the top of the page.

However, except in Europe, where it is occasionally compelled to under “right to be forgotten” laws, Google has never openly adjusted search results on behalf of an individual from the top down. Garrison’s case may be seen as an extraordinary one that merits an extraordinary, one-off response from the search engine. But on the other hand, it may well open the floodgates to others who are unhappy with their search results for less respectable reasons.

Legal options are unavailable to Garrison. “Several lawyers told me nothing could be done to stop libel on the Internet without spending a fortune.”

Garrison should by rights have powerful allies. For years, the forces of the progressive establishment have been marshalling their resources to combat what they sometimes call “online harassment,” sometimes “trolling” and at other times, absurdly, “cyberviolence.” The feminist crusade against all forms of internet hurt feelings has been covered extensively at Breitbart Tech. Surely Garrison, who has faced considerably more damage than mean words, should be their prime example?

I asked Garrison if he had ever been contacted by any of the individuals and organisations beating the drum about “cyberviolence.” The list, in no particular order, was Danielle Citron, Randi Harper, Anita Sarkeesian, Arthur Chu, Congresswoman Katherine Clark, Google Ideas, Twitter, Reddit, national governments and the United Nations.

Garrison’s response was unsurprising. “Nobody on that list has contacted me. Maybe they only want to help out SJWs and those on the left.” Meanwhile, Garrison offered yet another example of a giant tech company swinging into action to protect social justice warriors. “I was lectured by Facebook merely because I penned a cartoon that was critical of SJW student ‘crybullies.’ My cartoon and post were removed and I received a 24 hour ban.”

Garrison, an ardent libertarian, stresses that he does not want to see any government infringement on the internet to protect him from his trolls. “We need to use our free speech to speak out against such behavior. Each of us can choose to elevate the level of discourse on the Internet. We don’t need further government force to mandate that.”

After years of being tortured at the hands of the internet, there appears to be a glimmer of light on the horizon. That 4chan generation is growing up, and Garrison has become a cult figure of sorts for those who follow web culture. Indeed, that was why Breitbart Tech chose to launch with one of his cartoons on our front page.

The culturally libertarian, web culture-savvy generation have grown fond of Garrison, and in the wake of our commission, he has been receiving similar offers of work.

“I’m starting to see an expanding fan base for my “politically incorrect” cartoons. I didn’t really understand the culture war stuff, but after reading a book about SJWs written by Vox Day, my eyes are open. I’ll draw more cartoons pertaining to that subject.”

“Making a living as an independent political cartoonist is a notoriously difficult task, but it now seems possible. One collector has been buying up the majority of my original cartoons, and I can’t thank him enough.”

Garrison remains anything but a victim, and has taken a stoic attitude to his extraordinary predicament.  “As bad as the trolling has been, it has ended up making me draw even more cartoons in an attempt to recapture my own voice. It seems to be working and the trolls are finally losing.”

Ben Garrison can be commissioned for custom cartoons at www.grrrgraphics.com. His fine art can be found at www.bengarrison.com. Fans of his work can also donate to his Patreon.