A North American professional Counter-Strike player has found himself forced to attend an anti-bullying seminar by his employers after being caught verbally berating a fellow professional on a video stream.

The decision came after a huge backlash on social media from concerned fans, who created multiple Reddit threads and contacted sponsors demanding action be taken.

The Cloud9 player in question, Ryan “fREAKAZOiD” Abadir, had taken it upon himself to join a VOIP program to confront Ukrainian star player, Aleksandr “s1mple” Kostylev, who recently moved to America to play with Team Liquid. Since Kostylev’s arrival in America, he has been involved in a number of petty incidents of arguments with fellow professionals in the FACEIT Pro League, a pick-up games service where professional players compete against each other to win money.

Abadir, a self styled enforcer for his team, wanted to give Kostylev a taste of his own medicine. However, unknown to Abadir, his encounter was being broadcast via Twitch TV and the exchange was viewed by thousands. In truth, it was a very tame and childish exchange, the kind of insults you would hear on playgrounds the world over. “Do you have any friends,” was one such savage question, followed by the barb, “Get a tan.”

How this was spun as bullying is anyone’s guess, but that was how the resultant Reddit mob took it, resulting in a front page post calling for action. Initially this was a call for Cloud9 to sanction their player in some way, but as more and more people joined in the hysterical clamor for justice, eventually people felt the organisation should also be punished by contacting their sponsors. With one of Cloud9’s sponsors being Intel, who have increasingly spoken out against cyber-bullying and have partnered in a campaign called “hack harrassment,” people reasoned this was fair game.

A source from Cloud9 confirmed with Breitbart that three separate sponsors were contacted en masse with complaints about the player’s behaviour, with many of the messages saying they would boycott the sponsor’s products unless Abadir was removed from the team.

Perhaps more alarming for Abadir wasn’t that his position within the team was in jeopardy but that several people had taken it upon themselves to issue threats against his family. One particularly determined individual created a Twitter account called “rip freak’s family,” showing his family home in the Twitter banner, his address in the bio, and one tweet saying “you might want to move your parents into a hotel for the night because I’m coming to kill them.” 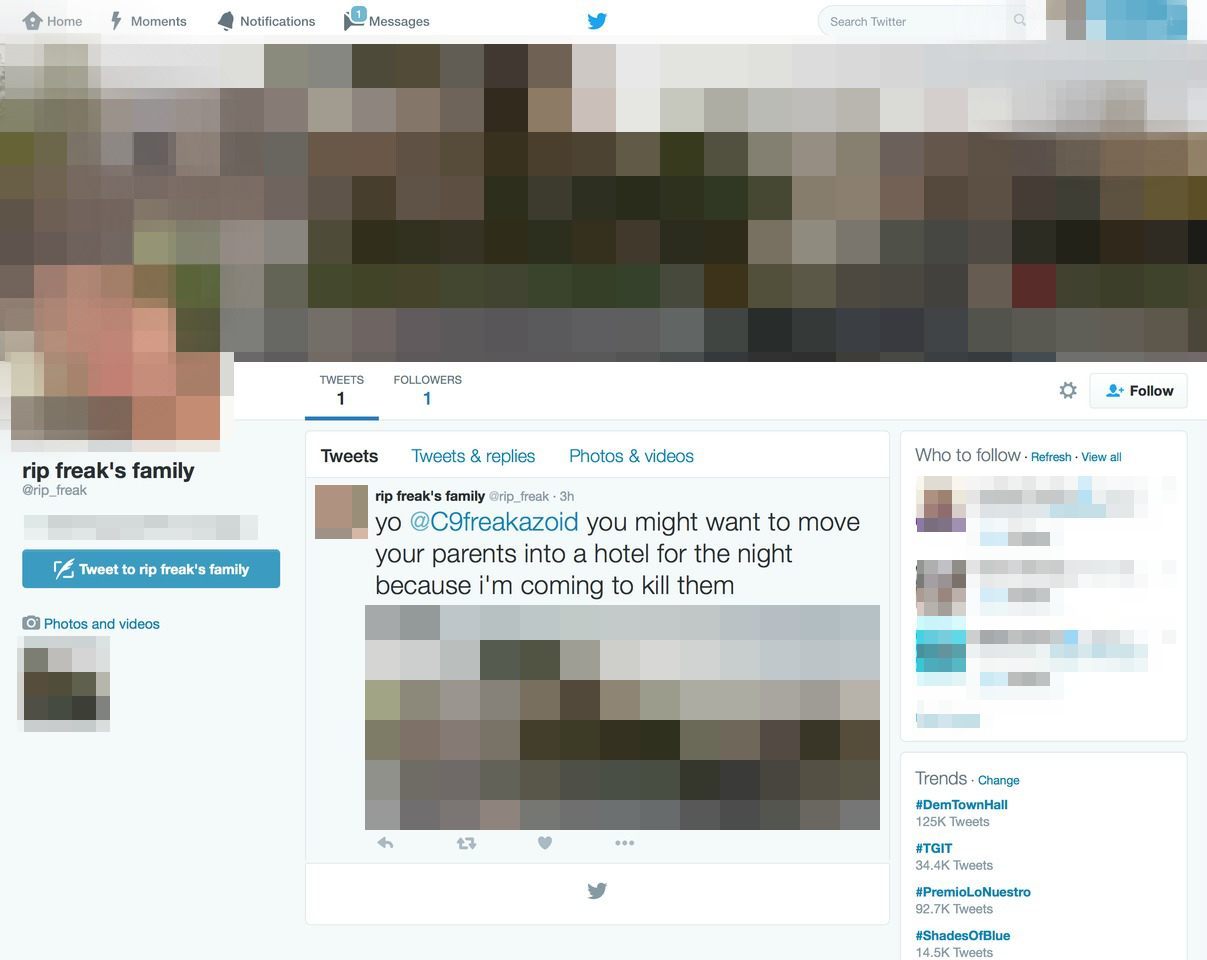 Cloud9 released a statement with an apology from Abadir. Cloud9 also issued a month’s fine, with half of it going to PACER’s National Bullying Prevention Center and the other half going to the Born This Way Foundation. The player was also told that he would have to attend an anti-bullying seminar.

While it is reasonable to expect professionalism from eSports stars, as you would any athlete, it does seem this one in particular received a disproportionate punishment for engaging in the type of behaviour most professional players do daily. Trash-talking is considered an integral part of Counter-Strike culture and it is hard to see how a one-off incident, occurring online, can be construed as bullying. And even if it were, surely it pales in comparison to the mob justice that was dispensed following faux moral outrage from anonymous individuals who surely engage in much worse behaviour on a regular basis.