There’s been a lot of pearl-clutching lately over Donald Trump’s tweet about Heidi Cruz, in which he compared a flattering picture of his own wife to a particularly dour-looking snap of Cruz’s. Critics say Trump’s not-so-subtle attack on Heidi’s looks was un-presidential and uncalled for.

The first point to be made is that Trump didn’t start the wife-baiting. Make America Awesome, a Trump-opposing PAC founded by the mannish Liz Mair, started circulating a particularly raunchy image of Melania Trump, urging GOP primary voters to back Cruz. While Cruz didn’t authorise the ad himself, it was retweeted by many of his supporters. As always, the super PACs acted like a ninja assassins for its candidate. “It wasn’t me, your honour – it was those dastardly, nefarious PACs!” 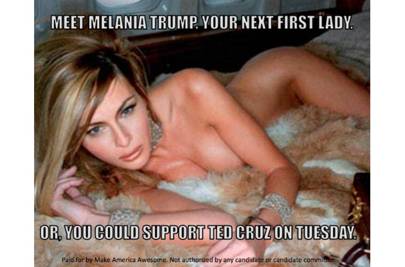 Feminists call this sort of behaviour slut-shaming. I call it sexy-shaming. I’m really not sure what’s achieved by pointing out that your opponent has an attractive wife. Isn’t that a sign of success? Indeed Melania isn’t just a great beauty: she’s proven herself to be eloquent and willing to speak up about immigration, and she is the only non-dwarf (sorry Jeb) spouse to have gone through legal immigration, unless you count Ted Cruz himself of course.

Is there any reason to attack her looks, besides the jealousy of women who apparently have neither looks nor brains?

Trump’s critics have accused him of being over-the-top in his response.  Surely, say his critics, insulting a rival’s wife for being too ugly is simply crass, classless, and rude.

I agree. It’s all of those things. But that’s a good thing.

For decades, politics has been a competition of grievance. Politicians and activists win public sympathy by pretending to be hurt and offended. Those who are the most convincingly wounded win the day — and it’s the left, the masters of faux-offendedness, who tend to beat the competition.

Trump’s crass tweets and objectionable comments may not be comfortable reading for old-fashioned conservatives who appreciate decency and good manners, but they are helping to break the language codes that were primarily set up by the left, for the left. Trump is destroying old notions of what’s acceptable and unacceptable to say, and the primary losers of his new paradigm will be left-wingers and establishment types.

If Republicans learn anything from the unbelievable failure of Mitt Romney’s 2012 campaign, it should be that “presidential” and “nice” don’t go together.  Isn’t it strange that elections follow the same rules as dating? Nice guys finish last.

Republicans typically reject the “everybody gets a trophy” mentality that has invaded our culture, but if you insist, we can add up to the attractiveness quotient of Cruz’s wife and all of his alleged mistresses and compare the total with Melania. That ought to at least earn him a participation trophy.

To beat Hillary, Republicans must focus on getting more people under the tent, which means snagging Democrats. Would Trump gain the support of blue-collar working Democrats by tearfully apologizing to Cruz after the senator’s minions attacked his wife? He could actually alienate them with that behaviour. Outside of the D.C beltway, respect is gained by standing up for yourself, and punching back twice as hard.
You also need balls to tame the beast of political progressivism. Trump is facing attackers from all sides. GOP establishment members planning convention shenanigans to steal the nomination, RINOs like Rick Wilson promising to vote for Hillary Clinton over Trump, and Soros-funded goons from Black Lives Matter and MoveOn planning attacks on the democratic process.  The Donald knows that the best defense is a good offense, and that’s exactly the style we need to win the election.

Trump isn’t just changing politics, he’s changing culture. The grievance wars have created a daily reality of fear for people who fall foul of the hyper-offended, even when the offense is unintentional. When actor Drake Bell cracked a joke about calling Caitlyn Jenner “Bruce,” he faced an internet lynch-mob of people who were offended on Jenner’s behalf and was forced to apologise.

Taking offense is a sort of one-upmanship. If you’re offended, especially on behalf of an allegedly “marginalized” group, it signals you’re a part of the educated, progressive elite. This, from people who’ve never read a book outside 2 years of a Gender Studies degree.

This is the consensus that’s prevailed in politics and culture for more than a generation. There are only two significant forces that are putting up a fight against it: the anonymous pranksters of the internet, who reside on websites like 4chan and 8chan and delight in deliberately offending people, and Donald Trump.

Because Trump’s campaign is almost entirely self-funded, he has leeway to be a total asshole on the public stage. He doesn’t have to worry about what polite society thinks of him, because unlike the other candidates, he isn’t thinking about the next fundraising dinner in D.C.

This has given him the unique ability to smash our culture’s stifling language codes with a sledgehammer. In the process, he’s certainly lowering the tone — but it badly needs to be lowered. Only by totally ignoring people’s feelings can we end the left’s culture of grievance, offense, and victimhood.  It’s what I’ve been doing for years, and it’s what Trump is now doing on the national stage.

Sure, the rudeness is uncomfortable to decent conservatives who appreciate good manners and a civil tongue. But if we really want to beat the left, we need Trump’s crassness. A few mean tweets about Heidi Cruz is a small price to pay to end a quarter-century of grievance culture.