A former curator of Facebook’s trending news section has revealed that the company purposely suppresses content from blacklisted outlets including Breitbart News, despite Breitbart remaining in the top 25 most engaged publications on the social network for 6 months in a row.

The trending news section is located on the right-hand side of Facebook’s homepage, and it links to the world’s most popular and curated news headlines, frequently updating to provide a top news bulletin for Facebook’s over 1 billion users. In an interview with Gizmodo, numerous former curators who wished to remain anonymous discussed the working environment at Facebook’s news department and revealed that certain news outlets were favored among others.

“It was clear that Zuckerberg could squash the project at any moment,” said one former curator. “We weren’t treated as individuals. We were treated in this robot way,” said another.

Curators were “told to select articles from a list of preferred media outlets that included sites like the New York Times, Time, Variety, and other traditional outlets. They would regularly avoid sites like World Star Hip Hop, The Blaze, and Breitbart, but were never explicitly told to suppress those outlets,” wrote Gizmodo after speaking to numerous ex-employees who were mostly hired by Facebook from liberal outlets such as MSNBC, New York Daily News, and the Guardian.

“They were also discouraged from mentioning Twitter by name in headlines and summaries, and instead asked to refer to social media in a broader context,” the report claims.

The article also revealed that most employees were in their 20s to early 30s and graduated from America’s top Ivy League and private schools.

“We choose what’s trending,” said one former employee. “There was no real standard for measuring what qualified as news and what didn’t. It was up to the news curator to decide.” 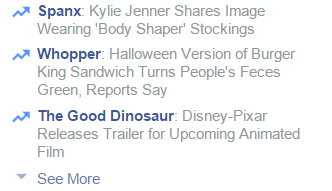 Former curators also admitted to Gizmodo that they had the power to “deactivate” certain topics from trending, meaning stories would be blacklisted from appearing at all on Facebook’s trending news section.

“I got the sense that they wanted to keep the magic about how trending topics work a secret… We had to write in the most passive tense possible. That’s why you’d see headlines that appear in an alien-esque, passive language” explained one former curator.

Breitbart has remained within Facebook’s top 25 most engaged publications for over six months in a row, and was at number six in the most commented-on English-speaking outlets last July. In March it was revealed that Breitbart sat at number 14 for the largest news publications active on Facebook during January, and in October last year Breitbart sat at number 9 of Facebook’s most shared publishers, just behind the BBC and ahead of Yahoo.